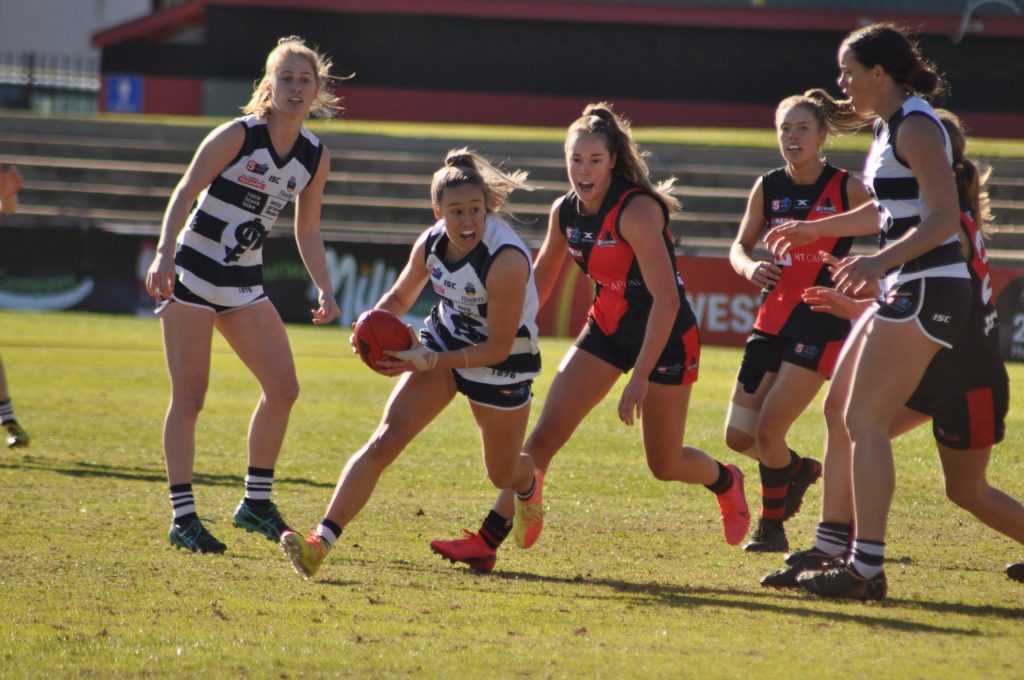 TWO teams with contrasting finals records face off in the 2020 South Australian National Football League (SANFL) Women’s preliminary final tomorrow, as reigning back-to-back premiers South Adelaide take on finals newbies, West Adelaide. The Panthers have a decorated finals history, coming from second last season to win their second consecutive title, knocking off minor premiers Norwood, and third placed North Adelaide along the way. West Adelaide is in unchartered territory. Having never made a SANFL Women’s finals series prior to 2020, the Bloods are here to make waves and they certainly did that in the semi-final with a stunning victory over Norwood to turn around a run of form that included back-to-back losses.

Interestingly enough, West Adelaide lost to Norwood in Round 9 of the season, and then beat them in the first week of finals, just two weeks later. In an eerily similar coincidental matchup, the Bloods lost to South Adelaide in Round 10 of the season, and tomorrow’s match is two weeks since then. Could the Bloods cause an upset and send the Panthers out in straight sets like South Adelaide did to the Redlegs 12 months earlier? It is possible, but the Panthers are a side that are hard to beat. Even against North Adelaide, it genuinely took four quarter to shake off the Panthers, and the Roosters have had their opponents on ice by half-time more often than not. The defence of South Adelaide is elite, and nearly all the midfielders can play forward and hit the scoreboard, which is something the West Adelaide defence must be wary of. Up the other end, West Adelaide is more than capable of kicking a big score, but inaccuracy has hurt the Bloods in the second half of the season, so they will need to back up from last week and continue that run of goalkicking form against South here if they are to win.

Anyone interested in the future stars of the AFL Womens – both current young guns on lists and future ones – then this game is perfect. South Adelaide’s Teah Charlton and Indy Tahau are the two top-age members of the AFL Women’s National Academy, and they are not hard to spot because they often have the footy in their hands. Charlton is a ball-winner who can play anywhere on the field, but when she has space in front of her, or an ability to jump, then she is as damaging as they come. Tahau is similar, she has some additional height, but incredible athleticism for her size, and she is not afraid to take the game on. A strong contested mark, Tahau can set plays up or be on the end of it, and quite often the two find each other in passages down the field. Speaking of close bonds, you do not need to look much further than recent draftees, Nikki Gore and Hannah Munyard taken in the past two drafts. Munyard will now join Gore at West Lakes after a season at the Bulldogs, and the pair have a habit of linking up, with similar speed and hardness around the ball and on the outside. Gore will tend to play more inside, while Munyard is let loose on a wing or inside 50, and her form of the past few weeks has been as good as anyone’s.

Looking at the youth of West Adelaide, and current Crow Madison Newman is one of the elite players of the competition. Her penetrating kick can carry 50m with ease and it is not far-fetched to say she is the best long-range kick in the competition. Still only a teenager and only one season into her AFL Women’s career, she has a bright future ahead of her. The potential for her to lineup on fellow South Australian representative, Munyard could be exciting in many ways with both competitive beasts on the field despite being friends off it. On the other half-back flank is a player who still has a couple of years left in the system, but Keeley Kustermann would be one of the brightest stars for the 2022 draft when looking ahead. Having a nice balance of offensive and defensive traits, as well as footy smarts and composure, she is already shaping up to be a terrific player in years to come. West Adelaide also have in-and-under midfielder Abbie Ballard, and future star Zoe Venning who both roll through the midfield or up forward. They are often amongst their best players and along with Emma Smith who was impressive last week, do well across that half-forward line.

Anyone tuning in for the first time to the competition will know a few familiar faces from AFL Women’s, with Stevie-Lee Thompson the most known of the Crows players having won the AFLW leading goalkicker in 2019. She will line-up for West Adelaide and spends a lot of time through the midfield, but as she showed last week, went forward and kicked 3.2 to be the match winner. Newman and versatile utility Chelsea Biddell are also in the red and black, with the latter playing forward as the team’s leading goalkicker in 2020. A couple of players who have thrown on a Crows jumper before are 2017 AFLW premiership player Rachael Killian, and train-on player Rachelle Martin. The Two Westies are important players, with Martin tipped to win the club best and fairest such is her consistency throughout the year. To give you a taste, she racked up 25 touches, three marks, 10 tackles, six clearances and booted a goal last week. Killian was quieter, but still provided a contest and has been known to hit cleanly between the big sticks. South Adelaide has even more AFLW listed players, with Gore and Munyard already mentioned, but GIANT-cum-Crow Lisa Whiteley playing a superb role in defence, while Nicole Campbell is another Crows midfielder who stands out at SANFL Women’s level. Cheyenne Hammond is crucial player adding extra class and runs around for Gold Coast in the AFL Women’s, while Czenya Cavouras was in the same boat as Martin in 2020, signed as a train-on player for the Crows. Meanwhile young ruck and last year’s first round selection Montana McKinnon stands tall through the middle for the Panthers.

Turning the clock back to the two meetings between the sides this season, South Adelaide has got up in both, with the Round 7 match ending up a forgettable one when it came to goalkicking as the Panthers kicked 3.11 (29) to win against the Bloods’ 1.8 (14), as Charlton booted two goals to be the difference between the sides, while Thompson and Kustermann were impressive for the losers. Three weeks later and only a fortnight ago, the Panthers goy up again, but only narrowly as they held on to win 4.5 (29) to 1.6 (12). The defence was key for the Panthers as Jaslynne Smith, Lauren Buchanan and Samantha Pratt were all amongst the best, while Helen Maidment stepped up for the Bloods, and Venning was good through the forward half as well.

WHAT DOES EACH SIDE DO WELL?

Both sides are very strong defensively despite being able to score freely. The Panthers are well structured enough to get numbers back in defence and help out teammates, even if that means running off an opponent, or a midfielder dropping back into the hole to provide extra assistance. They are a side that plays as a team and are really confident of their own ability to get the job done each and every week. Even when down you can never count the Panthers out, and teams cannot afford to just bomb and hope, or muck around with the ball inside 50 for too long. West Adelaide might have to push forwards higher up to open up space inside 50 and reduce congestion, then find the short targets when on the counter attack to limit the effectiveness of the Panthers back six.

West Adelaide’s half-back line is right up there with the best, and the Bloods look to get it into the hands of Kustermann, and in particular Newman. Once Newman can get her boot to it, the ball is long gone and the Westies are on the attack, so the Panthers need to find a way to quell Newman – they tended to put her under more pressure in Round 10 – to avoid easy exit out of their forward 50. The Bloods need to be able to free her up, and also keep structured, because when they have lost in the past, it is either because they tended to lose a bit of shape with their formation, or just could not kick straight. Both areas are within their control, so aside from keeping a firm formation, the Bloods have to make their chances count. Their midfield gives the forwards plenty of goalscoring opportunities, so they cannot afford to squander them.

It would be very dangerous to tip against South Adelaide given what the Panthers have achieved. On paper, the Panthers have won twice against their opponents, they are the back-to-back reigning champions and love this time of year. West Adelaide has nothing to lose as the underdogs, but when watching them, the Bloods can go one of two ways. They tend to either look like a team that could score heavily and quickly to roll over any team on their day, but then they can also tend to miss gettable opportunities and proverbially shoot themselves in the foot. If West Adelaide plays to its potential, this is going to be an absolute ripping contest. The Bloods often start fairly well, where the Panthers come home strong, but if the Westies are to cause an upset, they have to kick more than one goal on the board as they did the last couple of matches against this opposition. This match is not to be missed.