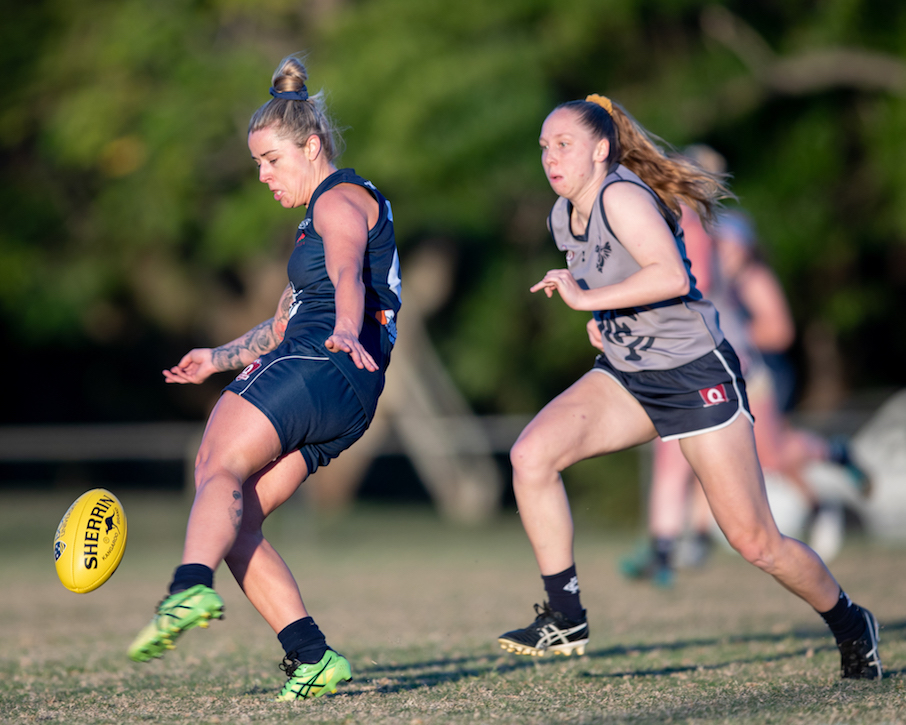 WITH a month of Queensland Australian Football League (QAFL) Women’s football remaining, the eight teams are jostling for the best possible ladder position heading into finals. Six of the eight sides will make finals – which makes it interesting with only the top five teams seemingly all but home unless one has a major slip-up. We take a look at some of the key battles within the fixture this weekend.

Top of the table Bond University should be strong favourites against Wilston Grange, with the Gorillas dearly missing Kate Lutkins in defence since heading to Victoria for her work in the army. The Sharkettes have rolled out four wins and a Round 7 cancellation draw to be well ahead on percentage, but still only four points clear of third, fourth and fifth. Annie Muir and Annise Bradfield are a couple of young talents who continue to perform for the Sharkettes, while Maddison and Tegan Levi are a couple of AFL Women’s National Academy members who are often amongst the best.

The Gorillas got their second win on the board last week in what was a crucial victory for Wilston Grange, knocking off last placed Aspley Hornets by 20 points. They will need to be more convincing this week though after a slow start in the first half in Round 8. Lucia Liessi (six goals) and Luka Yoshida-Martin (four) have been key influences for the Gorillas, while recently signed Brisbane Lions talent, Catherine Svarc, along with Kaitlyn Day have been sensational this year. It will take quite a performance to knock off the top side, but they have some good AFL Women’s talent in there to orchestrate it.

If Bond University do slip up, then Coolangatta Tweed will be waiting to pounce. Though the Bluebirds have their own problems to deal with this week, coming up against third placed Coorparoo who knocked them off last time out. With only four points separating the sides and the Kings having a far greater percentage, second spot is on the line in this clash. Furthermore, a loss would see them tumble down to fourth with Maroochydore and Yeronga South Brisbane also facing off this weekend. In their last clash, the Bluebirds went down by 34 points to the Kings, but have strung three wins on the trot since then, and two of those were against top two sides at the time, Maroochydore and Yeronga South Brisbane. The Kings have won four out of five since the restart of the competition, with only a slip-up to Bond University in Round 6 the sole blemish.

Both these teams have quality young players with Keyshia Matenga arguably leading the Bluebirds best and fairests at this point, with Alexandra Hamlyn another who has really stood out this season. The inclusion of Kate Surman and Leah Kaslar has bolstered Coolangatta Tweed, while Georgia Breward and Sally Riley are other experienced players who have thrived on the support of their fellow AFL Women’s talent. Any forward line that could contain the likes of Jess Wuetschner and Jamie Stanton will always be dangerous, and the pair have won games off their own boot. Emma McKenzie is a consistent source of goals, equal with Wuetschner on nine for the season, and been productive in season 2020. Throw in the likes of Ally Anderson and Emma Zielke, then youngster Jade Ellenger who is in unbelievable form, and the Kings are one of the clear title contenders.

The aforementioned fourth and fifth clash between the Roos and Devils is anticipated to be just as entertaining as the second and third clash. Not only are the teams evenly matched, but the last time they played, they could not be split in what would be the first time all season Maroochydore dropped points. Prior to that they had won every game, and since then, have lost two, and had the cancellation draw with Bond University. It has seen them slip from first to fourth, but luckily it is only four points difference, and the Roos have a better percentage than second placed Coolangatta Tweed. So does Yeronga South Brisbane, which means the winner of this game will grab third spot given they will overtake the loser of the Bluebirds and Kings.

The Roos have some serious young AFL Women’s talent in Lily Postlethwaite and Isabel Dawes running around, while other young Academy hopefuls in Chloe Gregory and Tahlia Mead have also been regulars in the side this season. The goals are shared around with Mikayla Pauga, Ashleigh Hales and Jacqueline Dupuy all snagging five majors thus far in season 2020. Lucy Bellinger has enjoyed a sensational year for the Devils, leading the club’s goalkicking with eight, and been arguably their top player this season in seven games. Vanessa Hart has been a welcome inclusion since the break, whilst Emily Bates and Jacqueline Yorston joined Jordan Zanchetta among a host of other AFL Women’s talents to have a real say on Yeronga South Brisbane’s efforts in the second half of the season.

The final game of the season is the sixth placed University of Queensland travelling to the eighth placed Aspley Hornets. With the top five teams relatively close and competitive, the Red Lionesses are 10 points off the back and look like the quintessential next best that might not be a serious contender, but have enough that on their day can cause an upset. That being said, if they want to play finals, they simply have to win here against a winless Hornets outfit. The Hornets were ultra competitive, and seriously unlucky against Wilston Grange in the bottom two clash last round, but with three of the top four teams – Bond University, Maroochydore and Coolangatta Tweed – coming up in the final three rounds of the season, this is the one game the Hornets can try and snatch a win and ensure they do not go winless in season 2020.

Courtney Daniec has been a rock all season for the Hornets, named amongst the best in every single match. Since coming into the side, Angela Lingard and Shaye Eaton have been prolific to help with the Hornets’ resistance, while Isabella Kotatis and Lucy Pengelly are other young talents who have been amongst the best performers in 2020. They might lack AFL Women’s experience, but the Hornets have nothing to lose and every side is dangerous when their backs are against the wall. It is hard to see the Red Lionesses dropping this game though, with Dakota Davidson averaging two goals a game since returning to the competition, and Greta Bodey not far behind with eight from five games herself. The pair have bolstered the attack and along with Breanna Koenen and Megan Hunt, have been standout players to help the Red Lionesses chase a finals spot.