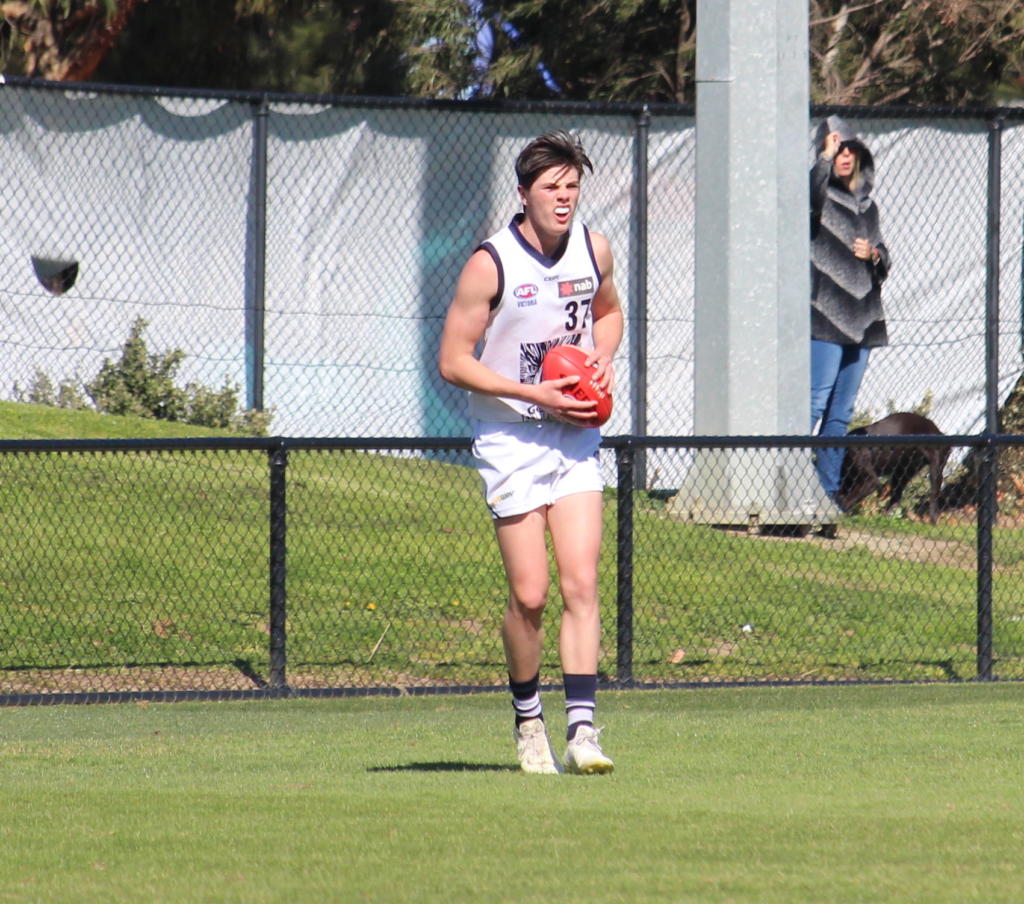 Next under the microscope in our AFL Draft watch is Geelong Falcons prospect Oliver Henry, the brother of promising Cats defender, Jack Henry. The 187cm utility boasts versatility in spades; able to swing up either end of the ground and impact the play both aerially, and at ground level. He plays a touch above his height with a terrific vertical leap, making him the ideal third marking tall up forward, or intercept and rebound type down back.

Henry impressed across 15 NAB League games last year, booting 18 goals – including a haul of five, four, and three goals early in the campaign. In a rare outing for 2020, he booted two goals and was among the best for St Joseph’s College in their outing against Geelong College. At this stage, he is well among the first round calculations.

Did not test – precaution due to tight hamstring.

The talented Geelong Falcon, who is the younger brother of rising Cats’ defender Jack Henry showed plenty of his talent in what was a hard day for the Team Dal Santo forwards. He was still able to catch the eye; he hit the scoreboard in the last quarter with a quality intercept mark in the goal square, showing his speed and quick decision making. Henry was strong overhead and clean at ground level but he also did the what was required defensively as well with some good tackles and smothers, he looks to be one of the most dangerous forward prospects in the 2020 draft.

NAB League Round 17 vs. Dandenong

After spending time in defence in recent weeks, the medium-sized utility was back inside 50 and showed off his talent when it comes to providing a target leading out. He had great hands overhead to continually remained involved in the contest, presenting at marking opportunities. He took an intercept mark early in the match but rushed his kick and it was smothered. Henry led long up the wing to win a number of touches up the ground, but also crashed a pack in the second term and gave it off quickly to keep it moving. He did err late in the quarter opting for a quick snap rather than giving the hands off to Charlie Sprague who was free nearby. He converted a set shot after being held midway through the third term and did have the two from the game, also setting up Sprague for his fourth after wrestling the ball from two opponents and giving it over to his teammate.

NAB League Round 16 vs. Tasmania

Had some sort of start to the game, clunking just about everything that came his way in defence with some brave efforts going back with the flight, and others coming in from the side. Henry’s clean hands and reading of the ball in flight were on full show, with his ability to rebound and find short options bringing a calmness to Geelong’s back half. Was arguably the most influential player afield in the first half, just continually attacking the ball in the air and bringing it down. Henry was eventually thrown forward as the Falcons rolled the dice late, but didn’t quite have the same impact. Will be a top prospect next year given his versatility, marking ability, and pedigree.

NAB League Round 7 vs. Murray

A great finisher around goal who works really hard up the ground. He goes on long searching leads and often can win the ball in midfield or even at half-back, before running hard forward doubling back on his opponent to create an outnumber forward of centre. He is strong overhead and is good on the lead, and had a great moment in the opening term, faking a step on the right to kick on the left in board to Tom Richardson leading out. He was a little ambitious at one stage in the third term, crashing through multiple players before getting caught, but finished the term with a soccer off the ground after pushing hard then doubling back once the ball went over his head. Took a great mark late in the game and kicked an easy consolation goal, finishing the match with three majors and strapping across his face from a blood nose.

The classy and smooth moving forward was dangerous all day and provided an omnipotent headache for Swans defenders. Played out of the goal square, Henry was often outnumbered in marking contests but managed to at least halve them or win them on multiple occasions. Had 13 touches, five marks and 4.2, the only knock on Henry’s game was missing a couple of easy opportunities earlier on in the piece. Plays taller than his size and was outstanding for Geelong, particularly in the second half which saw him score three of his four goals.