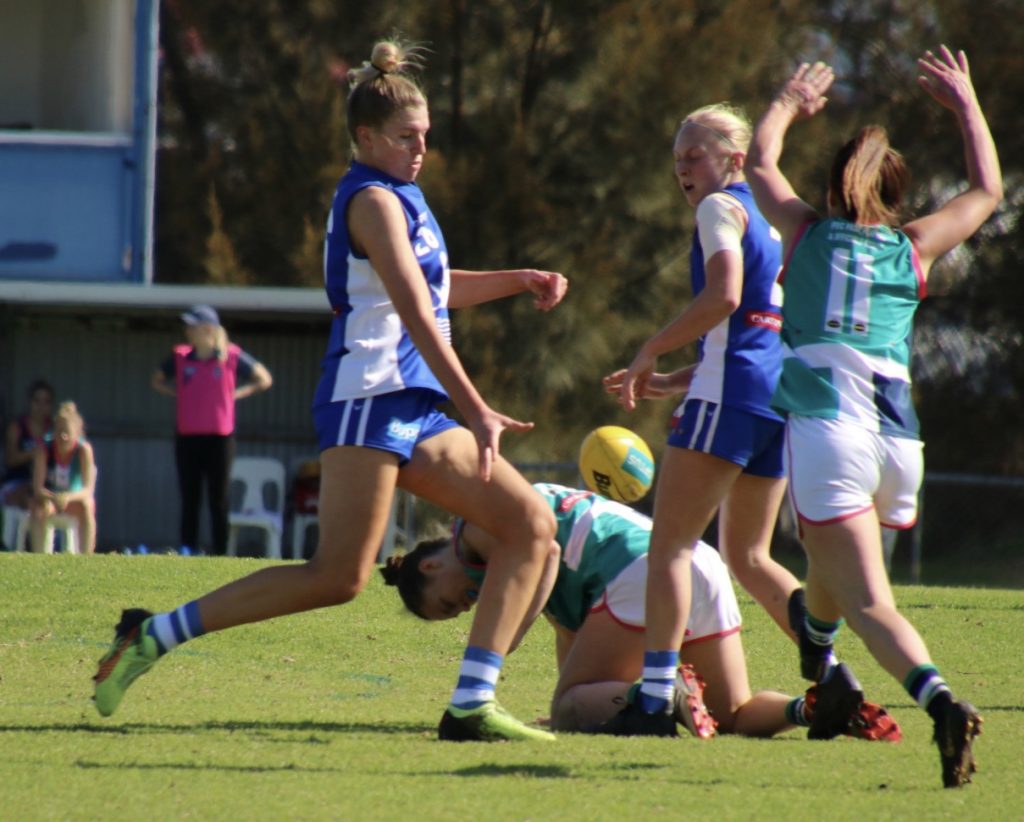 GROWING up in Northampton, a small town 500km north of Perth, Rosie Walsh was always fascinated with Australian rules football. Her brother played in the local competition, father loved the sport, and grandfather played for Carlton in the Victorian Football League days. But it was her late uncle who gave her the confidence to believe in her dream well before the AFL Women’s was established that set Walsh on her path to where she is today – being a threat inside 50 for West Australian Football League (WAFL) Women’s reigning premiers, East Fremantle.

“My grandfather who played was kind of inspirational because there was someone who had played AFL so I thought maybe I can continue on and play that,” Walsh said. “But then one of my uncles, when I was younger I had never met him before, but when I did meet him he was like ‘she’s going to play AFL one day’ and he’s no longer with us, and it was kind of like if he thinks that, when I only met him once, then maybe I can make it. “But then definitely all the girls at the football club can definitely contribute to that. “Girls in my team that I look up to who have been playing at East Freo for years and they look at me and say I have good talent so I thought maybe because someone else thinks that I can make it there.”

The support she has received over the journey has been uplifting for her, as Walsh moved from Northampton to board in Perth. Her country town has had more than its fair share of AFL players with the likes of Patrick Cripps, Harry Taylor, Paul Hasleby, Josh J. Kennedy and Jamie Cripps all among the notable residents. Unfortunately for Walsh, she ran into the issue that many young female footballers pre-AFL Women’s did, with a lack of opportunities.

“I played for the local team in under 10s but I was the only girl so I only played one season and didn’t continue,” she said. “I went to boarding school, I started in Year 9 which was in 2015. “I played for the school team and I loved it so much that I went down to East Fremantle when I was Year 12. “That was my first season there.”

Walsh has now spent three seasons at the Sharks and is loving it. One of the coaches at the school was also a coach at East Fremantle, which helped make the transition a little easier. Though having not played in five years, Walsh admitted it was really different to getting used to playing again, especially alongside all girls, and then having the whirlwind journey into the WAFL Women’s competition.

“(The experience was) definitely really different,” she said. “I played one season when I was 10, and I was playing with all boys, so going to an all girls school and just playing footy with just girls, it was definitely better in a way, but it was so different because I guess it had been such a long time, and kind of having other girls I can feed off. “Some girls that I played with were down at East Freo from my school, and then going from school footy up to WAFL level was definitely very different, so full on. “But I loved it, because I knew I wanted to go further with my football.”

East Fremantle has been the dominant team in women’s football the last couple of years, winning the last premiership in the West Australian Women’s Football League (WAWFL), as well as the inaugural one in the newly founded WAFL Women’s competition. For Walsh, the experience at the Sharks has been a lot more than just being a successful team.

“It’s amazing, I love the community down there,” Walsh said. “It’s not all about football, its about becoming a club and a family, about how we represent ourselves as a club and how all the girls are with each other and how committed the coaches are to not just teach us football, but how to build relationships, get close to one another. “That’s what I love about it and we have training sessions, but then other times we have bonding sessions, which we can work to build ourselves as people, not just as footballers, so I think it’s definitely on high how high we present ourselves professionally and as footballer.”

As a 187cm 20-year-old prospect and relative newcomer to the game compared to many of her peers, Walsh is a late boomer who been identified as a talent, which is why she earned a place in the West Australian State Academy squad. Starting her season in the Reserves back in Round 1, it was clear she was not going to remain there after kicking 11.4 (70) herself. That’s right, Walsh booted 11 goals against newcomers South Fremantle as she patrolled the forward line in a performance that unsurprisingly earned her an immediate call-up to the League side. Walsh said she was “surprised” by her haul because she had not kicked that many in a game before – very few have – but admitted it was a dominant team performance rather than a one-player game.

“We did end up winning by 130 points and when I do have a really big height advantage over my opponent (it is easier), she said. “But yeah it was honestly such a good game, I think that everyone honestly played as well as each other. “Now I’ve moved up to League and have played League games, but that was an amazing game.”

The move to the League side has not yielded any double-figure goal games yet, but Walsh looks at home inside the forward line of a Sharks team that is in a rebuilding phase as such, with a large amount of changes over the off-season and bringing in a stack of new and young prospects. Walsh said she noticed the difference competing against AFL Women’s players and experienced state league campaigners when stepping up to the top West Australian level.

“It’s a lot harder,” she said. “It’s more stressful I think. “But I think it’s more stressful for me because I’ve only played three League games, and going straight into League after playing Reserves it was a big step up. “Everybody knows what they’re meant to do, and everybody needs to know. “It’s just a lot more full-on, you kind of don’t get a break, but it’s also good because if you want to go further with your football that’s what you need. “You need those people to push you, when playing League you need that push, the coaches to push you, you need to work harder and some of the girls play AFL. “It’s really good for them to push you and to play with other girls with experience when you don’t have experience, so you can learn. “But it’s definitely harder and really good.”

Walsh is currently building her fitness, running every day to ensure she can compete for longer within games. Already boasting the height to trouble any opposition defender, she is looking to have more impact in games defensively and hit the scoreboard as often as possible. In the loss to Swan Districts last round, Walsh rolled her ankle after a goal and had to come off, but said while it was “a bit sore”, she would train and be able to run out against Claremont this weekend. The key forward said the team would look to bounce back after a defeat to the Swans that did not tell the whole story.

“I don’t think that the scoreboard really reflected how we played,” Walsh said. “I think that in the first half we played much better, but I think that we just, in the forward line our defensive pressure just lacked. “So I think that’s where we lost. “It went out so many more times than it went in. “Our forward line, our structure, we didn’t have it as well as we should have. Honestly I think we played good as a team but the other team just wanted it more.”

Walsh said the team would look to address its defensive pressure for this week against the Tigers in what was a must-win game when it came to finals calculations. In a six-team competition with a four-team finals series, the Sharks sit fifth with one win from four matches, and that victory came against newcomers and last placed South Fremantle in the opening round of the season. While Walsh said individually her dream was to push herself and make it to the elite level, her team goal was to help her side reach the finals series.

“I think that we can definitely make finals, we’ve had a bit of a slow start but that’s normal because our side has changed so much,” she said. “We’ve got half the team that we had last year, so many of the girls are young. “But honestly if we train hard and work hard outside of footy, I reckon we can make them (finals). “We’ve got the team, we’ve got the side, we’ve got the relationships with each other so I’m feeling positive.”