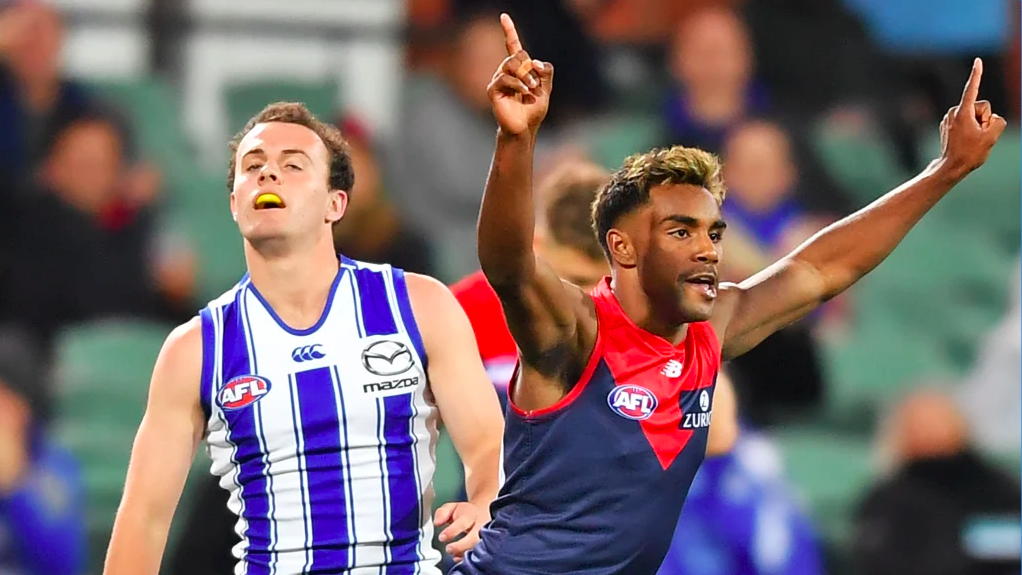 THE NUMBER of recruits from the 2019 AFL Draft to run out for their respective teams on the weekend again spilled into double digits, despite a few youngsters being squeezed out of senior selection. There was plenty to take out of Round 11 for the class of 2019, with a bunch of up-and-comers continuing to stamp their mark on the competition, and Sam Flanders making his debut. We take a look at how the best handful of them performed.

While his nous around goal has been evident since his first showings at the elite level, Pickett’s ability to act as the key link in Melbourne’s forward transitions came to the fore on Sunday. The diminutive South Australian is as creative as they come, using his speed, agility, vision, and elite disposal all at once to help the Demons remain potent on the attack. He isn’t shy to a high-flying mark, but Pickett’s work at ground level was exceptional in his side’s win over North Melbourne, and really gave the Demons a spark. He brings life to each possession chain he impacts, and should easily maintain his spot if he can consistently produce this kind of output.

With good mate Matt Rowell taking notes on the sidelines, Anderson has quietly gone about perhaps putting together the finest debut season of anyone this year. It has hardly been surprising given he was the number two pick, but Anderson continues to impact games and find plenty of the ball. He gets involved in transition while stationed on the wing, and has also chimed in with some work on the inside. His disposal may be a little rushed and raw at times, but Anderson is capable of gaining good meterage and getting creative in the forward half. He somehow seems to be flying under the radar.

Another youngster who has been a real asset for his side since debuting is Day, who arguably looks as comfortable at the level as anyone in his draft class. He has shown to be reliable on the ball with terrific decision making, efficiency, and penetration by foot, while also doubling his impact with intercept marking in defence. The South Australian is the type of player you trust in possession when breaking forward, or even under pressure on the last line. Developing more of a one-on-one, defensive game will be the next step in his development at half-back.

His stats may not again tell the full story, but Ruscoe has hit the ground running upon earning a berth at AFL level. The 192cm utility has found a home up forward, where he pops up in important passages of play. The Magpies may have coasted home in the end, but Ruscoe’s two goals came at crucial junctures in the contest, and helped his side get on top of a plucky Adelaide outfit. Those majors came back-to-back in the third term, and boy did he love his handywork.

Serong looks every bit the 200-game player that Fremantle would have signed up for having taken him with pick eight in last year’s draft. Much like Rowell at the beginning of the season, the Gippsland Power graduate has hardly looked out of place in the cut and thrust of midfield, with his contested game again shining against the Hawks. Not only did Serong extract, but he also continued to provide some real drive going forward for the Dockers, contributing plenty with his 20 disposals. Sharpening up his ball use to hit targets a touch more consistently, especially under pressure, will take him to the next level.