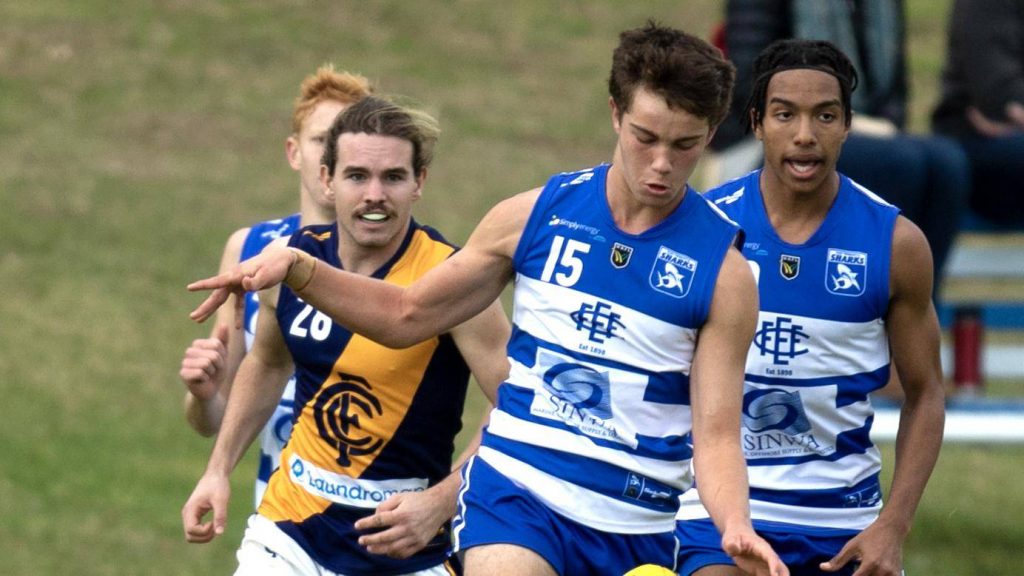 THIS week’s WAFL Colts match of the round was played between East Fremantle and Perth on Saturday, with the Demons overcoming the Sharks at Choice Homes Park. West Australian correspondent Lenny Fogliani was on hand to deliver a match report, and scouting notes on the most outstanding players.

In Round 4 of the 2020 Simply Energy WAFL Colts competition, Perth overcame East Fremantle by 11 points at New Choice Homes Park on Saturday morning.

The Demons now find themselves in fourth position, while East Fremantle are just one game outside of the top four.

Perth’s Conor McPartland was best afield against his former Club with 33 possessions, six marks, six tackles, five inside 50s and a goal in a powerful performance.

It was a stalemate for the majority of the first quarter, taking until the 21st minute before a goal was kicked. It was Perth’s Daniel Hill who snapped the ball out of a pack to register the first goal of the game. Moments later, McPartland danced his way around an opponent, before he kicked a goal to give the Demons a 14-point lead at quarter-time.

Within the first minute of the second quarter, McPartland won a crucial clearance to kick the ball long inside attacking 50. Harry Quartermaine was able to take a strong contested mark, before he drilled through his first goal of the morning. At half-time the Demons held East Fremantle goalless and went into the main break with an 18-point lead.

The Demons started the third quarter with a bang, after Jack Evans and Quartermaine kicked goals. Curley scored the Sharks’ first goal after he sidestepped an opponent before popping through his first major for the day. Jayden Narrier then took an uncontested mark inside 50, before converting his set shot. In the 24th minute, Walker burst clear from a contest, before he checksided the ball through for a great goal, and reduced the margin to 23 points.

Curley got the Sharks off to a good start in the last quarter when he snapped through his second goal of the morning. However, soon after, Hill took an uncontested mark in the goalsquare before scoring his second goal. Blake Hughes converted a set shot from a tight angle to keep the Sharks in it.

Despite this, Harrison Hyde dribbled through another goal for the Demons. After winning a holding-the-ball free kick, Curley popped through his third goal from an extremely difficult angle. In the latter stages of the quarter, Walker smothered an attempted rebounding 50 by the Demons, before he snapped through his second goal, which was unfortunately a consolation.

Next week, the Demons host ladder-leaders West Perth at Mineral Resources Park, while East Fremantle has the bye.

The Mullewa product was extremely dynamic in the forward half for the Sharks. He accumulated 19 possessions, laid a game-high 10 tackles, recorded three inside 50s and kicked a game-high three goals. The highlight of his game came in the third quarter when he danced his way around an opponent before kicking his first goal of the morning.

The former Aquinas student was busy in the midfield for East Fremantle. Playing as the centreman, Gorringe finished with 18 possessions, nine tackles and two inside 50s in a workman-like performance.

The Fremantle Dockers’ Next Generation Academy player was dynamic on the half-back line, often using his creative kicking skills to help propel plenty of the Sharks’ attacking opportunities. He finished with 19 possessions, five marks, three inside 50s, two tackles and two goals. His two goals were real highlights of the game – late in the third quarter, he burst from a stoppage before he checksided the ball through for his first goal. In the final stages of the last quarter, he smothered a Perth player’s kick, before he snapped through his second goal.

Another Fremantle Dockers’ Next Generation Academy member, Haddow was excellent in defence for the Sharks. The East Fremantle captain led from the front beautifully with 17 possessions, four marks and two tackles. In the final quarter, he was crunched in a Harry Quartermaine tackle and was forced to go off with what seemed to be a shoulder injury. However, he came back on the ground to try and inspire his team to victory – highlighting his toughness and leadership credentials.

The Chapman Valley product was his busy self through midfield for the Sharks. Playing as the ruck-rover, Carroll collected 20 possessions, laid five tackles, took four marks, and recorded four inside 50s in a polished display. His decision-making combined with his beautiful kicking skills make him an attractive midfield prospect.

The 16-year-old was livewire for the Demons in the forward half. Originally from the Thornlie Junior Football Club, Hill finished with eight possessions, three tackles, two inside 50s and two goals in his WAFL Colts debut. The highlight of his game came late in the first quarter when he snapped the ball out of a pack for the opening goal of the game, and his first career goal.

The Perth captain was inspirational for the Demons, often intercepting East Fremantle’s attacking entries, before setting his team into attack. He accumulated 30 possessions, took a game-high 12 marks, laid an equal team-high six tackles and recorded three inside 50s in a true captain’s performance.

Playing against his former club, McPartland continued his blistering start to the season with another sublime performance. He finished with a game-high 33 possessions, an equal team-high six tackles, six marks, a game-high five inside 50s and a goal. The highlight of his game came in the first quarter, when he sidestepped an opponent before kicking a goal.

The Northam product showed why he is one of WA’s leading AFL draft prospects this year with a brilliant performance. He gathered 22 possessions, laid three tackles and recorded two inside 50s in a strong display. His aggressive attack on the ball and man was inspiring. His decision-making and skill execution were also real features of his game.

The Bullcreek-Leeming junior showed why he is the in-form key forward of the competition with another strong performance. He finished with nine possessions, three marks, three tackles, two hit-outs, one inside 50 and two goals. A highlight of his game came in the second quarter, when he took a strong contested mark, before kicking his first goal.