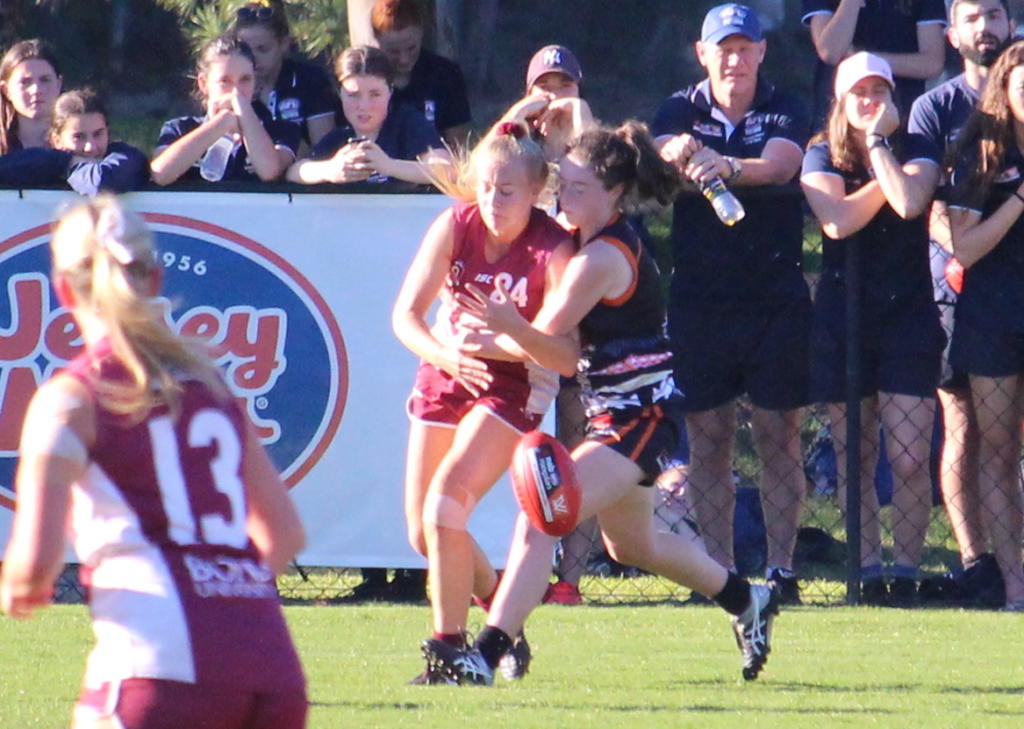 THE top five spots in the Queensland Australian Football League (QAFL) Women’s competition look sealed and delivered after Round 8 results saw the teams occupying those spots move 10 points clear of the bottom three. Bond University and Maroochydore’s postponed match from Round 7 was officially ruled a draw on the ladder, meaning the Sharkettes regained top spot with the Roos fourth. All within four points of each other are Coolangatta Tweed (second), Coorparoo (third) and Yeronga South Brisbane (fifth).

The Sharkettes showed no signs of fatigue coming off a week off, booting three goals to zero against University of Queensland in the opening term to race to a 22-point lead at quarter time. The Red Lionesses hit back in the second term, booting the only two goals of the quarter to draw within eight points, before the Sharkettes again kicked away in the third, piling on three goals to zero to all but seal the deal with a 29-point advantage at three quarter time. The teams were fairly even in the final term, with the Sharkettes running out flat five-goal winners.

Taylor Smith and Kalinda Howarth both slotted five goals for the winners, as young talents Annise Bradfield and Annie Muir were named among the best. Lucy Single and Krystal Scott were also strong in the victory which handed the visitors top spot by percentage. Dakota Davidson slotted another two goals in defeat for University of Queensland, while Grace Bodey (one) was one of he best. Sharni Webb, Marley Beavan and Breanna Koenen were others who shone despite the defeat.

Coolangatta Tweed won the battle of the temporary top two sides following Round 7 results, thanks to a nail-biting encounter with Yeronga South Brisbane. The Bluebirds and Devils were neck-and-neck for the most part, with Yeronga South Brisbane booting the only goal of the first term, before the Bluebirds hit back to hit the front by half-time with a narrow two-point advantage. Kicking the only goal of the third term, the Bluebirds extended the lead to five by the final break, and then held on with both sides booting a final quarter goal, but also a combined seven behinds with some missed opportunities in there.

The Bluebirds had four individual goalkickers on the day, including AFL Women’s talents, Sally Riley, Paige Parker and Kitara Farrar, as well as Holly Mirfield. Alexandra Hamlyn and Keyshia Matenga continued their good form to be named among the best, while Ebony Peterson and Kate Surman were also impressive. The Devils had an even team performance led by Lily Bougoure, Dee Heslop and Sarah Duncan, while Sam Virgo (two goals) and Adrienne Keefe (one) both hit the scoreboard for the home side.

Coorparoo snatched third spot with an important win over now fourth placed Maroochydore. The Kings made more of their forward entries, booting five goals from nine chances compared to two from 12. The Roos got the jump on the Kings in the opening term, leading 2.2 to 1.0 at quarter time, but then could not quite find the big sticks, booting eight behinds in the last three quarters as the home side kicked a more accurate 4.4 to run out 5.4 (34) to 2.10 (22) winners.

Jamie Stanton again was a source of goals, as the AFL Women’s talent kicked a couple along with fellow top-end stars, Emma Zielke, Ally Anderson and Jess Wuetschner. Anderson was named best on ground as Jade Ellenger continued her ripping form this season, while Renee Teys and Mollie Emong were also outstanding. Tahlia Randall was named among the best and one of only two goalkickers for the Roos, with Jacqueline Dupuy the other. Tayla Gesch, Isabel Dawes and Maggie Harmer were impressive in the loss too.

In a battle of bottom three sides, Wilston Grange ensured Aspley Hornets’ losing streak extended into an eighth week, defeating the winless Hornets by 20 points. It was definitely one of Aspley’s most competitive performances, leading at quarter time and half-time, but the Gorillas took over kicking 3.4 to 0.0 in the second half, two of which came in the final term to win 5.8 (38) to 3.0 (18).

Lucia Liessi kicked two snags in the win, while Paige Schouw, Krystle Spanos and Charlotte Taylor all kicked a solitary major. Emm Macneill, Catherine Svarc and Rheanne Lugg were all impressive for the winners, while Isabella Kotatis, Kylie Guarino and Shaye Easton stood up for the Hornets. Jasmine Kawa, Dakodah Cott and Lauren Kreis were all solitary major goalkickers in the defeat.