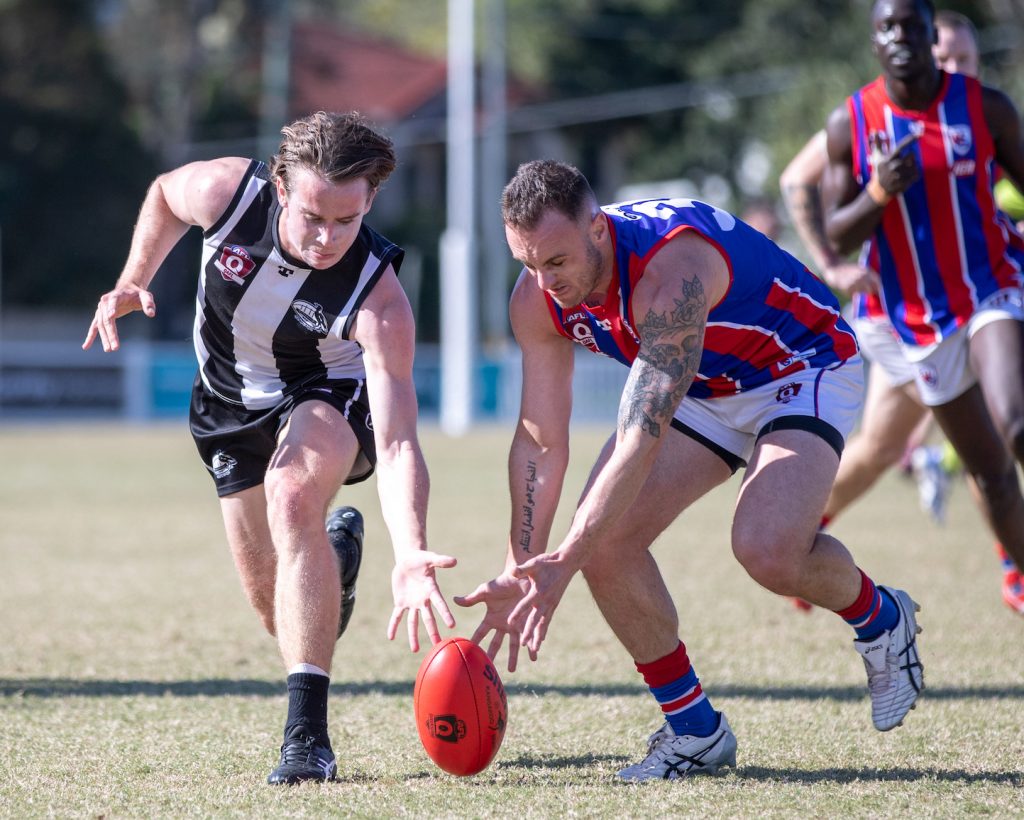 SHERWOOD and Mt Gravatt have snatched crucial wins against bottom two sides, Wilston Grange and Labrador respectively to ensure the Magpies and Vultures remain in touch with the top three of the Queensland Australian Football League (QAFL). While two of the top three sides – Broadbeach and Morningside – continued their undefeated run and Palm Beach Currumbin had the bye, the Magpies and Vultures now sit outright fourth and fifth on eight points, eight behind the top three, but four ahead of the rest of the pack.

Liam Dawson booted another five goals for the Magpies in their 33-point win over the Gorillas, piling on six goals to three in the opening term. Wilston Grange came back into the contest in the middle of the match, cutting the deficit to 11 by half-time and still being within 17 points at the final break, before the home side kicked away again with five goals to two in the last term to run out 14.3 (87) to 8.6 (54) in an accurate display of goalkicking.

Aside from Dawson’s five snags, Claye Beams scored three, and Brody Lumber booted two in an even term performance. Sampson Ryan (one goal), Aaron Highlands and Errin Wasley-Black were all named among the best for the Magpies in the win. For the Gorillas, Oscar Stewart and Josh Baxter booted multiple goals with two apiece, as Sam Gribble and Andrew Boston (both one) hit the scoreboard and were named amongst the best with Will McKenzie and Bae Gallop.

It took the full four quarters for Mt Gravatt to shake off a determined Labrador side, but finally did so with a four goals to one final term. The Vultures trailed at quarter time by 10 points, hit the front by 13 in the second term, but had their lead cut to two by three quarter time. Inaccuracy was hurting the Tigers, as they watched the Vultures run over the top of them with the breeze, booting 4.1 to 1.3 in the final term, for a Mt Gravatt victory, 11.7 (73) to 7.13 (55).

Jonah Licht starred up forward for the winners, slotting five goals in a best on ground performance, while Luke O’Sullivan was the other major goal kicker with two. Lochlan Harrop and Daine Macdonald were both among the best in an impressive performance by the visiting side. For the losers, Daniel Middleton booted three majors and was named among the best, as Fraser Thurlow continued his ripping form for the Tigers, joining Matthew Lee and James El Moussalli in Labrador’s best.

There was no stopping Jordan Moncrieff once again, as the Broadbeach forward powered his way to half a dozen goals in a dominant 70-point victory over reigning premiers, Surfers Paradise. The honeymoon period certainly appears to be over for the Demons, who have just one win from five rounds – albeit including a bye – but were smashed in the opening half, as the Cats piled on eight goals to one. The one-sided affair continued in the second half, though it was a little closer as Broadbeach ran out 13.15 (93) to 3.5 (23) winners.

Despite booting six majors, Moncrieff was not named as best on ground by the Cats, as Tyrone Armitage earned that honour. Harrison Arnold, Ethan Reeves and Kwaby Boakye were others who stood out in the huge win, while Clay Cameron and Connor Nutting booted two goals apiece. Harrison Fraser was the sole multiple goal scorer for the Demons, booting two of his side’s three majors, as Perry Lewis-Smith, Jack Prestegar and Myles Jewell were nominated as Surfers Paradise’s best in defeat.

Anything Moncrieff could do, Matt Hammelmann decided he could do better, one-upping the Cats forward in Morningside’s 15-point triumph over Maroochydore. The former Brisbane forward slammed home seven majors to be the leading goalkicker from the round, in a weekend that had five players slot five or more goals in a memorable Round 5 for the big men.

One of those was Maroochydore’ Mitchell Scholard who continued his unbelievable form with another five majors to ensure his team remained in the hunt for a win. They very nearly got there too, with Maroochydore leading at each break and by as much as 13 points at the last change. A four goals to zero final term saw the Panthers run over the top of them and win 14.9 (93) to 12.6 (78). Three of those four goals came from Hammelmann as he singlehandedly spearheaded the attack and dominated inside 50.