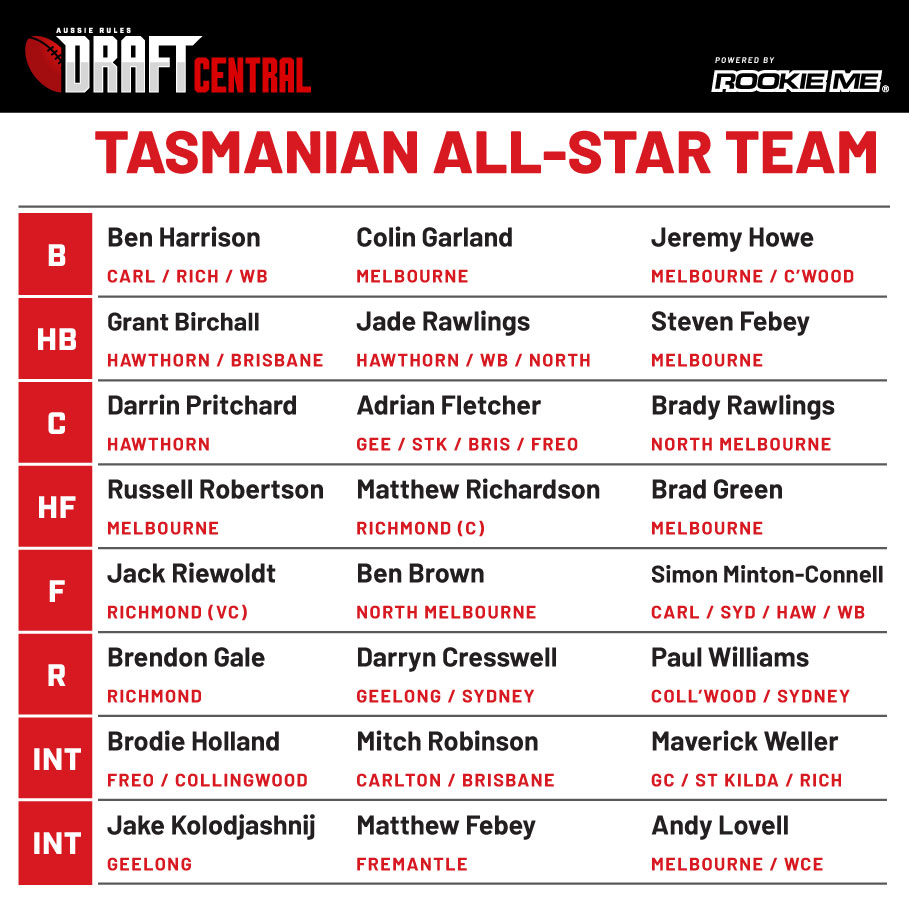 TASMANIA has produced plenty of talented AFL stars over the years, with the Apple Isle more than deserving of its own elite level team. In this All-Star Team of the AFL Era, Draft Central gives fans an idea of what an all-Tasmanian side could have looked like, granted with players across the past three decades.

Tasmania is rich with talent and players who can launch long, penetrating kicks from well outside 50. From the defenders to the forwards, a number of players are more than capable of hitting the scoreboard or piercing defensive zones from a fair distance away. They have a well-balanced team, a gritty midfield and strong defence. By far their greatest strength is their forward line, with the most goals kicked by any All-Star side in the series.

The balance between offensive and defensively minded players is strong, with Jeremy Howe and Grant Birchall providing run out of defence. One can only dream of having the pair in the same backline with their raking long boots doing terrible damage to opposition defensive structures. There are a couple of handy 200-gamers are in the other spots with Melbourne utility Steven Febey (258 games) and three-club player Ben Harrison (211) providing valuable experience.

The two key position players are Colin Garland and Jade Rawlings, though Harrison could be that additional tall if required. Rawlings has the versatility to play up either end, while coming off the bench, Jake Kolodjashnij could also play in a key role, while Matthew Febey could be off a flank.

Hard. That is the best way of describing he midfield, with a tough onball group that no one would like to mess with. Paul Williams is the games record holder from the Apple Isle, racking up 306 games and booting 307 goals where he could also play forward. Joining him in there is the tough Darryn Cresswell and Adrian Fletcher, while Brendon Gale is the ruck. Between the quartet, the starting onball group has 1025 games of experience, as well as four best and fairests and two All-Australians.

On the wings is the silky skilled Darrin Pritchard who modern day spectators might not remember, but he played 211 games and won three flags with the Hawks. On the other wing is Brady Rawlings, who won three best and fairests and surpassed the 250-game mark himself. Coming off the bench is the likes of Mitch Robinson, Andy Lovell and Maverick Weller could rotate through there.

The front six is where the magic is for the Mariners/Devils with quality key forwards, mediums and smalls that have a lot of goals between them. Leading the team is Richmond forward Jack Riewoldt, with three Colemans, three All-Australians and two best and fairests in the bank, not too far off 300 games and 650 goals. He is in the forward pocket given his athleticism over his career, and he is the games record holder of a player coming out of the Tasmanian under 18s development program. At full-forward is Ben Brown, with the North big man always coming close to All-Australian, making the 40-man extended squad three times, and has nearly 300 goals from 130-odd games. The centre half-forward needs no introductions with Matthew Richardson kicking the most goals of any Tasmanian with 800, as well as 282 games, three All-Australians and a best and fairest.

Two of Melbourne’s best players of the modern era sit at half-forward with Russell Robertson and Brad Green combining for almost 500 games and 800 goals between them. Green could push into the midfield, and Robertson was a high-flyer with serious X-factor. Rounding out the front six is Simon Minton-Connell who slotted 305 goals in 112 games. Between the front six, they have combined for a mind-boggling 2793 goals, at an average of 465.5 per player. That combination is by far the most damaging forward line of the lot and would be near impossible to stop. Brodie Holland is a player who could impact up forward coming off the bench, but also run off a wing.

Of those who just missed the cut for the Mariners/Devils’ All-Star side, Justin Sherman (138 games) has the most, ahead of Tom Bellchambers and Liam Jones. Other 100-gamers are Aaron Hall, Simon Wiggins, Trent Nicholls and Josh Green. Peter Street (78 games) is next in line, ahead of Luke Russell (73), Aaron Joseph (73), Jesse Lonergan (60) and Jason Laycock (58). In more modern times, Toby Nankervis, Jimmy Webster, Alex Pearce and Brody Mihocek are established players. More recently again, Tarryn Thomas is looking good for the Kangaroos, Chayce Jones is running around for the Crows, while Mitch O’Neill and Matt McGuinness are among those who were drafted last year.