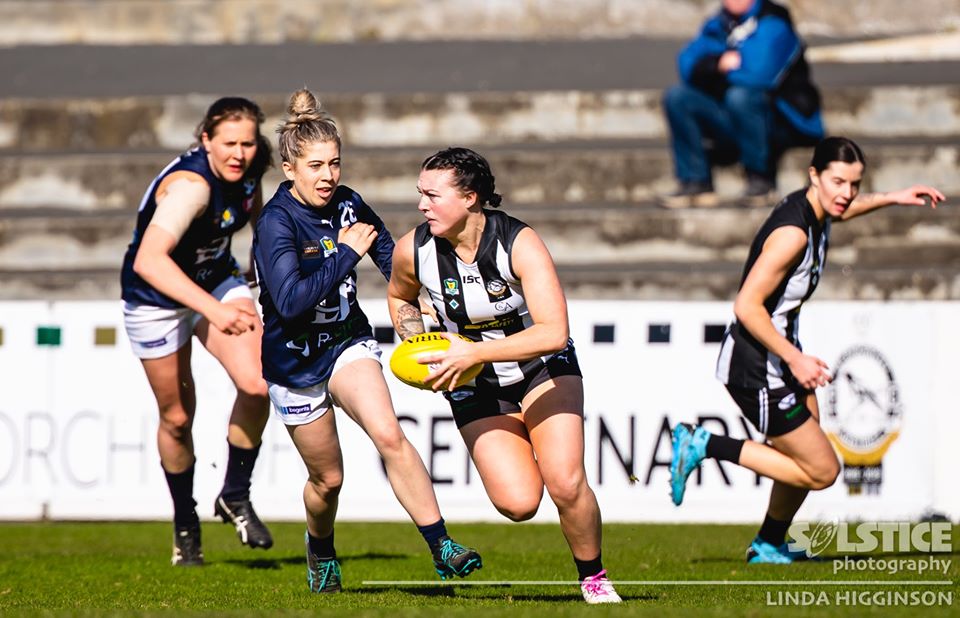 GLENORCHY Magpies reaffirmed themselves as a genuine premiership contender in the Tasmanian State League (TSL) Women’s competition with an impressive 25-point win over the previously undefeated Launceston. The upset win against a side that has only lost once in the past 12 months – the 2019 TSL Women’s Grand Final – helped Glenorchy move to third on the table, percentage behind the Blues. Meanwhile Clarence’s impressive 10-goal win over Tigers handed the Roos outright top spot.

The impressive Magpies got the job done courtesy of a dominant final term in what had been previously an arm-wrestle against the Blues. Kicking the only two points on the first term, and then leading by a solitary point at half-time, Glenorchy booted the only four goals of the second half, whilst restricting the top of the table Launceston to just one behind in the process. By the time the siren sounded, Glenorchy had won 5.3 (33) to 1.2 (8).

Sarah Skinner booted two goals for the Magpies and was among the best, as Elise Barwick, Molly Mitchell and Angelica Clark all snagged a goal apiece. Former North Melbourne talent, Libby Haines was best-on in the upset win, while Kira Maass and Macklyn Sutcliffe were also impressive. For the Blues, Makenna Hillier slotted the only major of the game, while Kelsie Hill joined AFL Women’s talents, Daria Bannister and Mia King among the best in the loss.

Amy Edmand was best on ground with four goals as the only multiple goalkicker, with Clarence teammates lining up in a real team effort with seven individual goal scorers. Nicole Bresnehan, Brianna McDonald, Jacinta Limbrick, Netty Garlo, Emma Blair and Megan Harper were the others who hit the scoreboard, as Brianna Oates, Louisa Marmion and Amy Prokopiec all impressed in the red and white. For Tigers, it was a youth feel among some of the bests with Priscilla Odwogo, Hailee Baldwin and Mimosa Middleton Miller all amongst the bests in the big loss.

Moving onto Round 5 in the competition, and a huge top of the table clash takes place at Windsor Park as Launceston looks to dethrone Clarence and take back top spot in a must-watch encounter. In the other game, the two winless teams in North Launceston and Tigers do battle with the winner to lock up fourth spot on the table for at least a week.