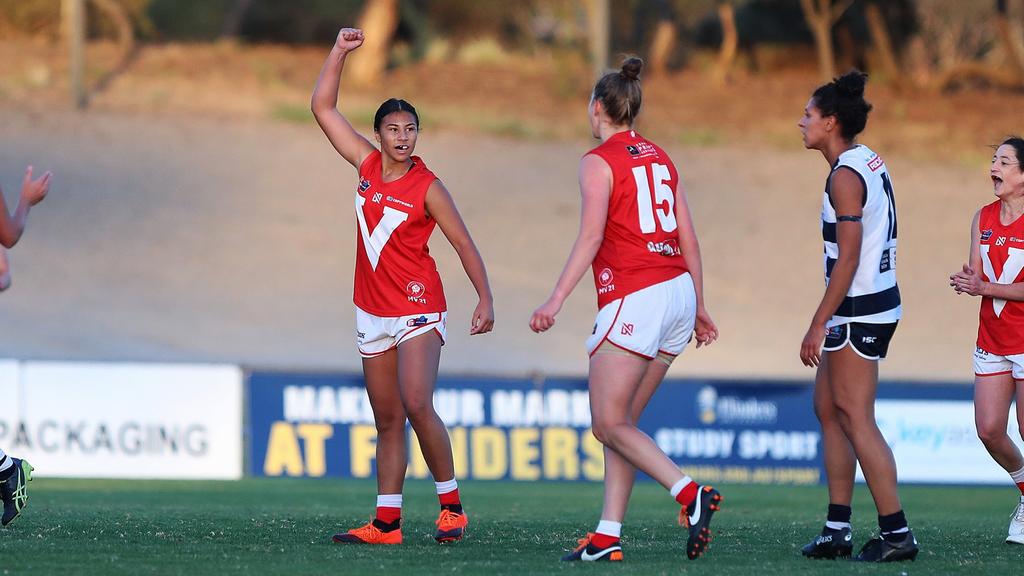 A DOUBLE header at Thebarton Oval provided South Australian National Football League (SANFL) Women’s fans with plenty of top quality action, and we have taken a look at two players from each team that Caught the Eye. We have looked at players 21 years or younger, and have never been on an AFL Women’s list, showing the talent at state level which is bursting for a chance at the elite level.

The bottom-age prospect has been one to watch since her debut in Round 1 this season earned her a Rising Star nomination. Now well established in the line-up for 2020, Ewings not only held her spot, but became one of the most dominant midfielders running around because of her speed, agility and game smarts to move through congestion with ease. In terms of 2022 top South Australian players, she would be right up there with the top group. Not only does she have the athletic traits, but she has a low bullet pass that is rare in players of her age – having the composure to lower the eyes when blazing away and hitting targets. Even more so, on the finals stage where she looked more than comfortable running around and against AFL Women’s opponents, was able to use her composure to be a key reason why her side got over the line and into a grand final.

The 20-year-old is a damaging forward who plays a key role. She has her moments throughout games and usually always looks dangerous around the ball with nice pace on the lead. She protects the ball drop and can mark above her head or on her chest, and kick goals from multiple opportunities both in play and from set shots. This season she has really been a key component of the Roosters’ forward line and one that can just have her moments within quarters or games that stand out and help contribute for her side. She is one to watch coming into the grand final as she works well when leading out in conjunction with other teammates inside 50.

There would not be too many surprised by Charlton making the list from the weekend given her already littered resume. She was a star at last year’s AFL Women’s Under-18 Championships as a middle-ager and was one who was as good in the air as she was at ground level. Charlton has terrific goal sense and has time and space when she wins it, as well as a penetrating kick and the ability to play in multiple roles. Spending time in defence this year as well as up forward and through the midfield, the likely top pick for the Crows this year continues to impress as one of only two top-age AFL Women’s Academy players. With an All-Australian to her name, as well as a SANFL Women’s Team of the Year selection, Charlton is a key player for the Panthers.

The other AFL Women’s Academy member who hails from the same side, Tahau is another utility who can roll through the ruck, or stand as a key forward. But what sets Tahau aside compared to other 180cm-odd players is her ridiculous speed. She showed on the weekend she is not afraid to take the game on, setting up a Panthers goal to Hannah Munyard with her ability to break the lines and go from half-back to half-forward. She has already proven she is capable on the big stage, winning best afield in South Adelaide’s premiership last year. She will be keen to put in a similar performance this time around if the Panthers can make it again, and upset North Adelaide in the decider in two weeks time. In terms of talls, Tahau is right up there with the top group in the draft crop.

The top-age midfielder is one who you would just love on your team. She cracks in hard, lays a plethora of tackles throughout games and never takes a backwards step. She can play on the inside, outside or up forward, but she belongs under a pack where she fights tooth and nail for the ball. A real see-ball, get-ball player, Ballard is one who never gives in and you know what to expect from her. She showed it on the weekend in her second game back since missing a week for the Bloods. She might not have had the same amount of touches others did, but she was influential, particularly when the game was on the line, and led by example by bringing the heat and laying double-figure tackles around the ground, six of which came in the first term.

An exciting, raw talent it is clear that Venning has a fair bit of upside to her game. She can sometimes do a touch too much, but that confidence is great to see, and Venning is one who with time will become a really dangerous player. Already she has no trouble finding the ball, and roams between the midfield and forward line, and takes the game on. She hits the scoreboard and sets others up, and while she will be disappointed she missed a golden opportunity running into goal, she got the first final jitters out of the way, and was still one of the Bloods best in the win. She has a lot to offer to the side, and is a point of difference in a side with a lot of inside ball winners as she has a touch of class to go with her hardness as well.

Zander is still only 20-years-old and had the COVID-19 pandemic not ruined the chances of Victorian football, the Redlegs midfielder had signed on to run around with Collingwood in the VFL Women’s program. There are plenty of talents in the SANFL Women’s competition who have not yet been on an AFL Women’s list that are over 18, but Zander might just be the best of them in terms of upside. She is tough, has great speed, works hard around the ground and can play as a small forward as well as a midfielder. The interesting aspect of signing up to play with Collingwood in the VFL Women’s is that the AFL Women’s coach is Steve Symonds, her former mentor at the Redlegs.

An over-age utility who predominantly players through the midfield or up forward, Breed’s highlight package and best is as exciting as anyone’s. Still building consistency throughout games and round by round, Breed has the capability of dominating a game in a couple of quarters and kicking multiple goals. Her ability in the air is terrific, and she is mobile enough to cause headaches at ground level. She loves to move the ball quickly, and is a contested marking specialist, having represented Northern Territory and Central Allies at the AFL Women’s Under 18 Championships. Seemingly having improved on last season, Breed continues to build aspects of her game to show she has areas of improvement for the future.