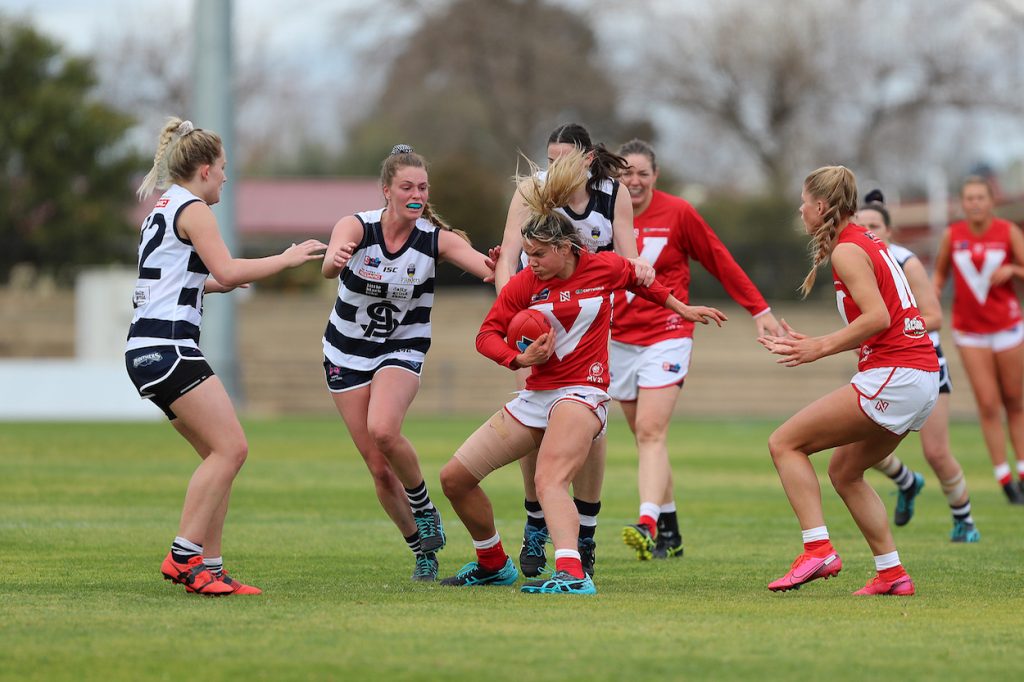 NORTH Adelaide has backed up its unbeaten South Australian National Football League (SANFL) Women’s competition with an impressive eight-point victory over South Adelaide to book its place in the 2020 Grand Final. Hoping to go one better than last year, the Roosters will await the winner of the Panthers and West Adelaide, following the Bloods’ statement win over Norwood in the do-or-die semi-final.

If there was ever a prime example of a low-scoring contest being an edge-of-your-seat thriller, then North Adelaide and South Adelaide’s semi-final clash would be it. The Roosters and Panthers kicked just five goals between them, three of which came in the first half, but it was far from a scrap, with the two best teams in the SANFL Women’s going head-to-head in a high-octane battle, eventually won by the undefeated Roosters, 3.7 (25) to 2.5 (17).

Neither side was willing to give an inch early in the game, with Montana McKinnon having an early couple of touches for the Panthers through the ruck, whilst ball magnet Anne Hatchard was dominating through the middle for the Roosters. While Hatchard’s running power – such as her ability to find space and seemingly have no one able to work with her, it was also the slick ball use of Hannah Ewings straight down the throat of Ashleigh Woodland five and a half minutes into the contest. With their first inside 50, the Roosters had a goal on the board, and it would prove golden in the low-scoring contest.

An early injury from the piece of play to Samantha Pratt saw the young defender helped from the ground, but her teammates in Jaslynne Smith and Lauren Buchanan were pushing hard to keep the ball out of the danger zone. South had controlled play, but were just not getting on the end of scoring chances until late in the term when the play of the day from Cheyenne Hammond created said opportunity. A huge run-down tackle earned Hammond a free to kick forward and then Hammond pushed up as her kick hit Nicole Campbell who found Jess Kirk. While Kirk’s shot fell in the goalsquare, Hammond dove on it and was awarded a free kick, popping it home to level the scores at quarter time.

Teah Charlton had a busy opening term and would continue that in the second quarter, leading all-comers for her side with seven touches, and then 13 by the main break, but it would be no surprise to see Hatchard in front with 17. The second term saw North kick a crucial goal after pressing for the majority of the contest, as Kathryn Reynolds got on the end of a chain of handballs thanks to Britt Perry‘s work to draw an extra opponent and put through a running goal. Both teams had chances, as Kirk had a shot a couple of minutes likes but hit the post, before Perry missed a chance from 45m out to the right.

The work of both half-back lines was telling in the low-scoring scrap that was quite entertaining thus far and the game on the line. South showed why they were well and truly in the hunt with a great piece of play from young gun Indy Tahau off half-back. The AFL Women’s Academy member got the ball forward and it ended in the hands of Hannah Munyard who used the body well in a marking contest and kicked truly from the goalsquare.

Katelyn Pope was using her speed to advantage for the Roosters, having a big start to the second half, but it was South that was piling on the pressure and realistically should have added an extra goal or two with the Panthers’ forward half domination. Gypsy Schirmer had a couple of chances close to goal, including a tough snap from the boundary with the outside of the boot but it just bounced the wrong side of the post. Both Hammond and Campbell were big influences on the game through the middle, but it was Hatchard and Ewings who really shone, as the latter again had a great kick inside 50 and with four and a half minutes left in the third term, Perry kicked a terrific goal from a spin out of trouble to snap and bounce home after a favourable kick in from Mollie McKendrick.

The stage was set for a terrific last term, and once again this game proved that you do not need goals to be flowing for it to be tense. In fact, neither team kicked a goal, but there was still end-to-end football at times, and plenty of individual plays of brilliance. Tahau and Munyard were continually involved in attacking transitions, while Hatchard and Ewings were always busy. Smith won a good free in defence on Reynolds which had a been a good battle on the day, while a huge tackle on Czenya Cavouras from Ash Woodland and Charlotte Taylor saw the latter come off second best and helped from the field.

South almost had a huge major late in the term when Nikki Gore ran down the usually-elusive Ewings, which saw South play on and get it forward with a quick kick from Charlton heading towards goal but was about to sail home but touched on the line. Most of the last couple of minutes South continued to drive it forward, with Schirmer almost taking a grab on the goal line but the Roosters defence rushed it through. It was a game of almosts for South, as North Adelaide held on, and Perry had the last kick of the game from 40m out, missing, but making it an eight-point victory and her side booked its spot in the 2020 SANFL Women’s Grand Final.

West Adelaide won its first ever final and in the process delivered Norwood its fourth consecutive finals loss in the SANFL Women’s competition, saluting by 43 points in the do-or-die semi-finals clash. The Bloods tackling pressure was enormous and they had the numbers on the inside and outside to back up their defensive work, restricting Norwood to just one goal in three quarters as they piled on seven of the first eight majors and finished off with a 9.4 (58) to 2.3 (15) victory.

The first term started with ruck Leah Cutting and 2019 league best and fairest Najwa Allen winning a number of crucial touches to lock the ball inside 50. Madison Newman and Rachelle Martin were working hard in the defensive half of the ground as Abbie Ballard was burrowing in to lay a game-high six tackles in the first term. Despite Norwood having the early ascendancy, once West Adelaide got it forward, the Bloods locked it inside their own forward 50, and after a couple of opportunities, earned a free kick straight in front of goal to Chelsea Biddell. The key position utility made no mistake 20m out and handed her side the early lead.

Norwood tried to answer off the next stoppage by getting it down to Matilda Zander at half-forward but a smart intercepting by Bloods’ captain Lauren Rodato sent the ball back up the field. Not long after, Zander had a great chance running into the open goal but shanked the kick – something both sides would have a tendency of doing throughout the game. In fact, three minutes later, Nicole Hooper sprayed it out on the full herself following a quick snap. But a second chance less than a minute later came via another free kick in front of goal and once against West made no mistake to go 11 points up at the first break.

The Redlegs came out fiercely to try and attack from the get-go in the second term, but a quick shot hits the behind post and yet again Newman was there to mop up. The tenacity of the Bloods was obvious as their pressure went to another level and created a scoring opportunity through Kasia Culhane and then Stevie-Lee Thompson bu the shot just missed. Emma Smith was having a big influence at half-forward, driving the ball in, and Zoe Venning was winning plenty of the ball, but had very little space at times. In the end, the pressure of the Bloods resulted in a third goal, and a second to Biddell who marked strong overhead and converted off a slight angle.

West had a few more chances in the term, but the work of Cassie Tsoumbris coming off half-back, and Cutting through the middle, as well as Allan working hard around the ground, avoided the Redlegs being further down at the half. Rhiannon Busch was also winning plenty of the football with 11 kicks to the main break, only behind Allen for her side, while Neman and Martin led all-comers for disposals at half-time.

The third term is often referred to as the premiership quarter, and while it might not have been a premiership, it is where the game was won. West Adelaide progressed through to a preliminary final with four goals to one off the back of some terrific play. Venning and Thompson were quite often involved, but for the first one it was Biddell who found Rachael Killian inside 50. The kick drifted to the right, but Biddell marked it on the line and rather than go for the snap from the tight angle spotted Martin straight in front of goal 20m out, found her and her teammate rewarded her with a perfect set shot goal. When Ballard crumbed the ball off the pack a couple of minutes later, the lead was out to 31 points and the Bloods fans were sniffing their first ever finals win.

Refusing to give up, the ball raced down the other end off the next stoppage and went from Allen to Zander tight in the pocket. This time the number one made no mistake from the set shot with a perfectly weighted kick that sailed through from 20m and there was a slight pulse. It was soon be put to bed though as the next stoppage also resulted in a goal – to West Adelaide. Straight out of the middle it hit Hooper leading out, and following her clunking mark, nailed the set shot and the lead surpassed five goals. The game was all but sealed and delivered with Keeley Kusterman drifting forward and hitting up Thompson who dropped the mark, but recovered well to quickly snap with the outside of the boot not far from the siren with West leading by 37 points.

Needing a miracle and early goals, Norwood had a hail Mary in the form of Alana Lishmund who won a free kick 90 seconds into the game and kicked truly to put the margin back to 31. Another behind a few minutes later made it a square 30 points, but that was as close as it got with the West Adelaide defence and whole ground pressure overwhelming. Smith was superb, as was Newman, while Ballard and Martin’s tackling pressure all over the field was immense.

It led the way for a couple of Thompson goals late in the piece as Norwood looked to switch inside the defensive 50 and the dangerous pass inside was picked off by Thompson. Moments later, a Zoe Greer tackle in defensive 50 led to an end-to-end play with Thompson out-bodying her opponent and kicking from metres out. Even Newman got in on the party, swung forward late, but her set shot was just touched on the line. It mattered little though as the Bloods got up 9.4 (58) to 2.3 (15) on the back of a superb tackling effort.