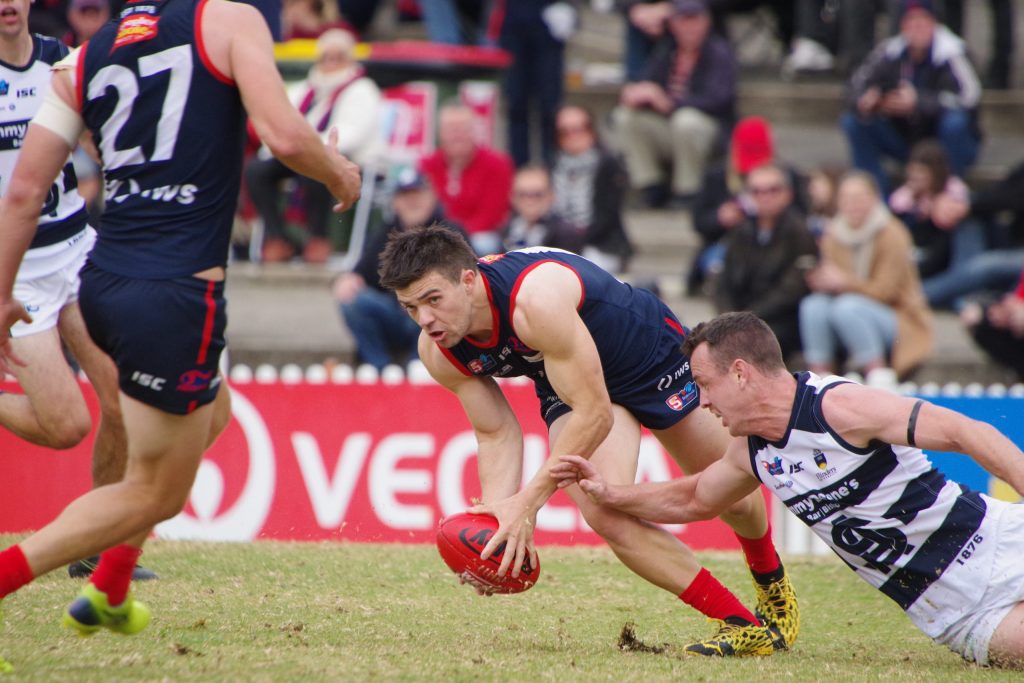 ROUND 7 of the SANFL saw the League finals race hot up, as Norwood triumphed over South Adelaide to create a mid-table bottleneck. Woodville-West Torrens (WWT) continues to lead the way in the top grade and remain undefeated at Reserves level, while Sturt and Norwood have broken clear atop of the Under U18s standings. Read all about that, and more in our wrap of the action.

The Eagles picked up a hat-trick of wins over West Adelaide on the weekend, headlined by senior performances which kept them top of the tree. Their 48-point League drubbing was earned in a seven-goal to one second half, while the Reserves hardly looked challenged en route to a 88-point triumph. At an undefeated 7-0, the Eagles remain a game clear atop the two’s ladder and are nothing short of a finals lock. Westies’ haul of just two wins across the three grades stands, as they sit bottom in the Reserves and Under 18s competitions.

James Rowe and Tristan Carcuro did the damage in the Eagles’ League victory with four goals each, while Jack Hayes was again dynamic with 24 disposals and eight marks. Remarkably, Nick Hayes booted six behinds from his 16 disposals and 12 marks. Christopher Hall (24 disposals), Jimmy Toumpas (23), and Joseph Sinor (21, one goal) found plenty of the ball.

Speaking of, Kaine Stevens racked up a game-high 30 touches for the Bloods, followed closely by Aaron Anderson. Riley Thilthorpe took on the ruck duties, winning 18 hitouts to go with 14 disposals and six marks, while Brett Turner (22 disposals, one goal) and Patrick Fairlie (22 disposals, five clearances) benefitted from his ruckwork.

Jase Burgoyne continues to thrive at Under 18s level for the Eagles, accumulating a game-high 37 touches in his side’s win. He starred as part of the midfield rotation alongside Caleb Poulter (27 disposals, eight marks), Max Litster (26 disposals, seven clearances), and Harrison Dawkins (23 disposals, one goal).

It was a familiar story for the Bloods as Bailey Chamberlain boasted the highest numbers (34 disposals, six clearances), while the defensive trio of Eduard van den Berg, Zac Venning, and Kane Sherlock combined for 22 rebound 50s. Luke Young also chimed in with three goals up forward.

Central Districts’ Under 18s became the second Bulldogs outfit to play in a draw this season, after proving unable to separate from the Bays after four hard-fought quarters. Centrals’ Reserves had no trouble bouncing back from last week’s defeat to go 6-1 in second place, but the Tigers were again victorious at League level as they continue to push for a top four spot.

Luke Edwards made his League debut in the Bays’ fourth win, running out alongside older brother, Jackson as both notched just over double digits for disposals. In another game which opened up after half time, Liam McBean managed to add four goals to his formidable season tally, while Luke Partington claimed two from his team-high 31 disposals. Matthew Snook also found the big sticks with one of his 29 touches.

Travis Schiller was busy all day for the Bulldogs, accumulating 39 disposals, nine clearances, and seven inside 50s, while James Boyd and Troy Menzel also cracked the 30-disposal mark. Victorian Jack Toner continued his solid start to SANFL League life with 20 touches, while Justin Hoskin and Murray Stephenson both bagged a couple of goals each.

Controversy clouded what was a ripping game of Under 18s football, which ended in a draw between two well-matched sides. Centrals looked to have done just enough as Kobe Wilson slotted home a goal in the final minute to reclaim the lead, only for a Harry McInnes behind after the siren (and nearly 27 minutes played) to level up the scores. The Bulldogs led by as much as four goals in the third term, before Glenelg went a kick away from pulling off the miracle comeback.

McInnes played a key role with 5.4 from his 12 disposals, while Riley Davis booted two from a team-high 20 touches. Lewis Cowham slotted back into the Centrals side to notch a game-high 24 disposals alongside Austin McDonald, while Saxon Evans snagged four majors from 18 disposals and seven marks, with 32 hitouts adding to his big performance.

North Adelaide remains level on points with League table toppers, WWT on the back of a 19-point win over Sturt. On trend with the previous two games, the Roosters broke the contest open after half time with seven goals to Sturt’s two, after the sides managed just a goal each in the opening half. The Double Blues gained redemption with wins in the other two grades though, remaining a finals threat in the Reserves, and climbing to the top of the Under 18s ladder.

Harrison Wigg (31 disposals) led a trio of key Roosters ball winners, with Cameron Craig and Andrew Moore both finding 29 touches of their own. Robert Young (three goals) and Kym Lebois (two) were North’s lone multiple goalkickers, while Harry Morrison was one of two Sturt players to bag a couple of majors. James Battersby maintained his consistent run for Sturt with 32 disposals, while Abe Davis racked up 31 and Sam Colquhoun, 28. Young guns Casey Voss and Jed McEntee also continue to impress.

Will Spain provided good fold through midfield for the likes of Tom Powell and Mani Liddy as Sturt’s Under 18s got back on top at the right time to secure a sixth win for the year. All three players picked up over 20 disposals, while Tom Emmett kicked three goals.

Kallis Freer made an emphatic return for North with a team-high 28 disposals, while Matthew Borg and Kyle Brazell both managed 26 touches and a goal each. Jamison Murphy and Tariek Newchurch were others to return and find the goals, with diminutive defender Blayne O’Loughlin putting in another terrific shift in the back half with 25 disposals and eight rebound 50s.

Norwood’s League side sent a message to its fellow finals contenders, downing South Adelaide by four points in a thrilling contest. The Redlegs stormed back ahead at the end of the third term and managed to hold on throughout the fourth to ensure both sides came out of the clash with 4-3 records. The Panthers Reserves got one back with an 80-point smashing on the road, but their Under 18s fell by 24 points as they both look to get a proper grip on a finals spot.

17-year-old Jason Horne made his League debut for South and looked to have kept up with the pace of the game, with his toughness on show amid a nine-disposal effort. Joseph Haines (25 disposals, eight rebound 50s) and Matthew Broadbent (22 disposals, one goal) were again influential for Souths, while Liam Fitt contributed three goals. Sam Baulderstone was mega for Norwood, amassing 23 disposals, 10 clearances, four marks, 42 hitouts, and a goal in his side’s win. Matthew Nunn and Richard Douglas again ticked over 25 disposals, with Matthew Panos and Mitch Grigg also influential.

Brayden Cook has been garnering attention at Under 18s level, and again caught the eye with four goals from 16 touches for the Panthers. Jack Flett and Harry Spacie (both 20 disposals) were again kept busy in the Souths defence, as Norwood pulled away late for the win. Henry Nelligan stood out in his first game at the level for 2020, booting two goals from 24 disposals and laying 10 tackles. Jack Saunders also managed 24 touches, while Cooper Murley continues to shine having notched a game-high 31 disposals to go with seven marks, six inside 50s, and a goal.