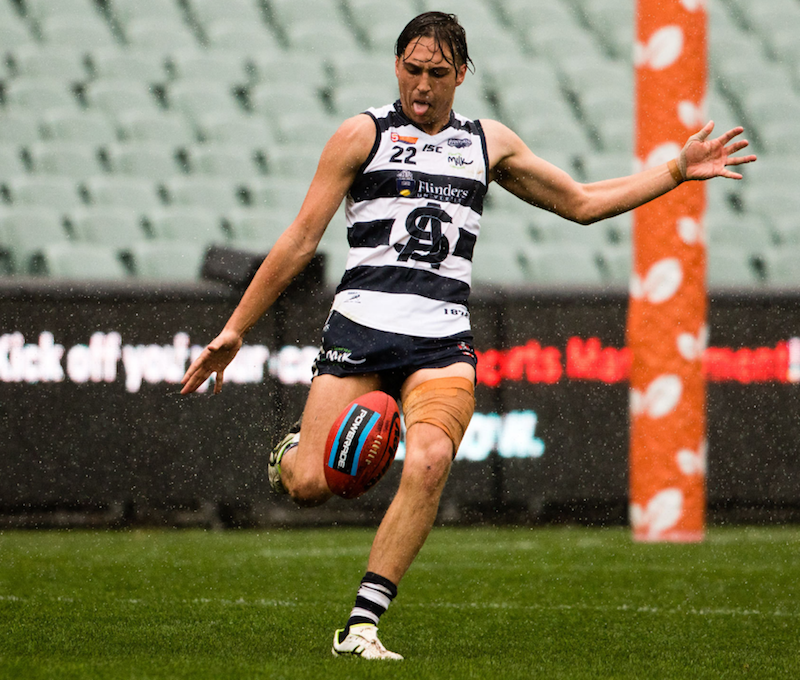 Next under the microscope in our AFL Draft watch is South Adelaide’s Zac Dumesny, who hit the ground running this year with appearances at SANFL League level across the first six rounds. Standing at 187cm, Dumesny is a utility who can play a touch above his height with terrific reading of the play and marking prowess, while also providing clean skills at ground level. The Panthers product is apt on each line; able to intercept and deliver off half-back, link the arcs on a wing, or provide an outlet up forward. With versatility in spades, Dumesny sits on the precipice of first round calculations.

>> Get to know: Zac Dumesny

Dumesny was great for the Panthers, collecting 19 disposals, five marks, three inside 50s, and two rebound 50s. He played predominantly at half-back and on the wing, and at 187cm he is a great size for these positions. Dumesny started the game with a nice intercept mark deep in defence, which was one of many strong marks he took throughout the match. He never juggles his marks, thus making him a difficult player for the opposition to spoil.

In one-on-one contests he always positioned himself well and was never out-marked. Down the wings he linked up with teammates to carry the ball forward and get multiple score involvements. His teammates trust him with ball in hand too, as his kick is extremely reliable and he barely missed a target all day. Dumesny looks at home at League level which is a great sign for him ahead of this year’s AFL Draft.

2020 SANFL League Round 3 vs. Central District

The utility produced his best performance since making his League debut in Round 1. Throughout the day, Dumesny found himself in acres of space, often taking a mark with no Bulldogs opponent in sight. Able to play a roll in all three zones, Dumesny spent time as the link-man across half-back and along the wing at X Convenience Oval. In the opening term, he found veteran midfielder Joel Cross with a well-placed left-foot kick to his advantage. Shortly after, he took a mark from a short Cross kick and, this time, used his trusty right boot to centre the ball to the hotspot, 35-metres out from goal. He continually showed great footy intelligence to find open space and used the ball with trademark efficiency.

In the second term, Dumesny’s composure was evident when he resisted pulling the trigger on a long kick downfield and chose to handball to an open teammate rather than blaze away. Whilst a couple of his kicks didn’t reach their intended target, his field kicking was largely impressive and helped South retain possession. In the third term he found himself alone inside 50, marked the centring-ball from Beau McCreery, and converted the regulation set-shot from short range. It was another encouraging performance from Dumesny, who appears to have cemented his spot in the South Adelaide League side thanks largely to his clean skills (kicking at 91 per cent efficiency for the season), versatility and smart running. Dumesny finished with 19 disposals, ten marks, a goal and three inside-50s.

Dumesny had a very solid game for the Panthers. He was a standout in the first term, collecting six disposals in the backline and setting up a goal with a beautifully weighted kick into the forward 50. Dumesny was quieter in the second quarter, but moved to a wing for the second half where he found more of the ball and nailed a set shot from 35 metres out. The top-ager was composed with the ball in hand and hit the majority of his targets by foot. He also took a couple of nice intercept marks, which could develop into a feature of his game with more experience at half-back. He finished with 15 disposals, six marks, four rebound 50s and three tackles.

Did not win a heap of it but was fairly economical with his ball use. He had a quick handball whilst being tackled at half-forward, but was not so lucky when he tried to play on in a similar spot and was run down by Reef McInnes. Managed to hit-up Zavier Maher and Joel Western on the wing coming off half-back with neat passes in the second half as well.