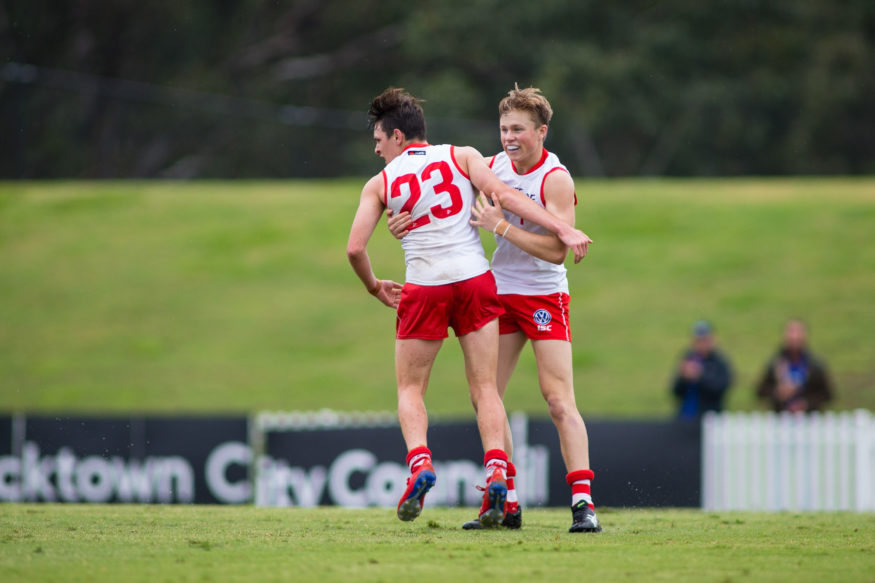 IN continuing our extended Player Focus series, we take a look at a prospect who stood out in the recently commenced Academy Series. A Sydney Derby kicked off the carnival, as the GWS GIANTS and Sydney Swans academies locked horns over the weekend. Leading Swans prospect Braeden Campbell is the player we put under the microscope, with his trying performance across a range of positions helping Sydney get up by 15 points in a low-scoring slog.

After a scintillating performance in last year’s Under 17 Futures All Star showcase, Campbell is well known to all keen AFL Draft watchers. The Swans Academy jet is lightning quick, boasts a damaging left-foot kick, and provides great balance through midfield while also doubling as a flanker up either end. He can do it all, and Saturday’s game against the GIANTS was a true test of his skillset.

The soggy conditions were hardly conducive to Campbell’s typical run-and-carry, and forced many similar types to revert to different methods of driving the ball forward. Luckily for Campbell and the Swans, he can win his own ball, and his kicking is among the best in the 2020 draft pool. These factors allowed him to have a consistent impact on the attack.

Starting at the centre bounces, Campbell looked lively early, adjusting well to the step-up from representing Pennant Hills in the AFL Sydney Premier Division. He booted a couple of clearances into Sydney’s attacking 50, and looked dangerous on the break as he gained separation from his direct opponents. While the long bombs didn’t quite come off, Campbell would soon enough find a target with his lovely lateral ball to find an unmanned Pierce Roseby inside forward 50.

After a bright start through the middle, the 181cm prospect began to rotate through the lines and primarily off a wing. A rare turnover via foot came in the second quarter, perhaps for a lack of options forward of centre, and it seemed Campbell was receiving a good bit of opposition attention. A more reserved term and some biff on the half time siren would attest to that.

He returned to his usual self after the main break, and showed he doesn’t need to win a mountain of possessions to have an impact. His five-step burst of speed came in handy when wheeling away from the back of congestion, allowing enough room for Campbell to prop and deliver the ball via foot – both laterally and directly forward. Campbell’s lone goal of the game came in the third term, as his direct opponent failed to follow him to the fall of the ball inside 50, allowing for a relatively straightforward finish on the move. He’s deadly accurate within 50 metres.

Moving on into the final period, and Campbell would return to the centre bounces after some time across half-back and on the outer. He seemed a touch frustrated as he lost out in a couple of hard-fought one-on-ones in general play, but was still finding his way to the ball. His desire for the contest remained, hunting the ball amid heavy congestion and proving clean below his knees on the move.

He missed the chance to cap off his day with another major, spurning a hand-off from just outside the 50-metre arc with the result beyond any doubt. Overall, it was a well-rounded display from Campbell in conditions unsuited to good football. While his outside traits (speed, kick penetration) often catch the eye, this time it was his inside game, and the ability to adapt to that style which helped win the day for Sydney. It was by no means his best performance, but Campbell always seems a class above when on the ball and produced some clean plays amid the messy contest.