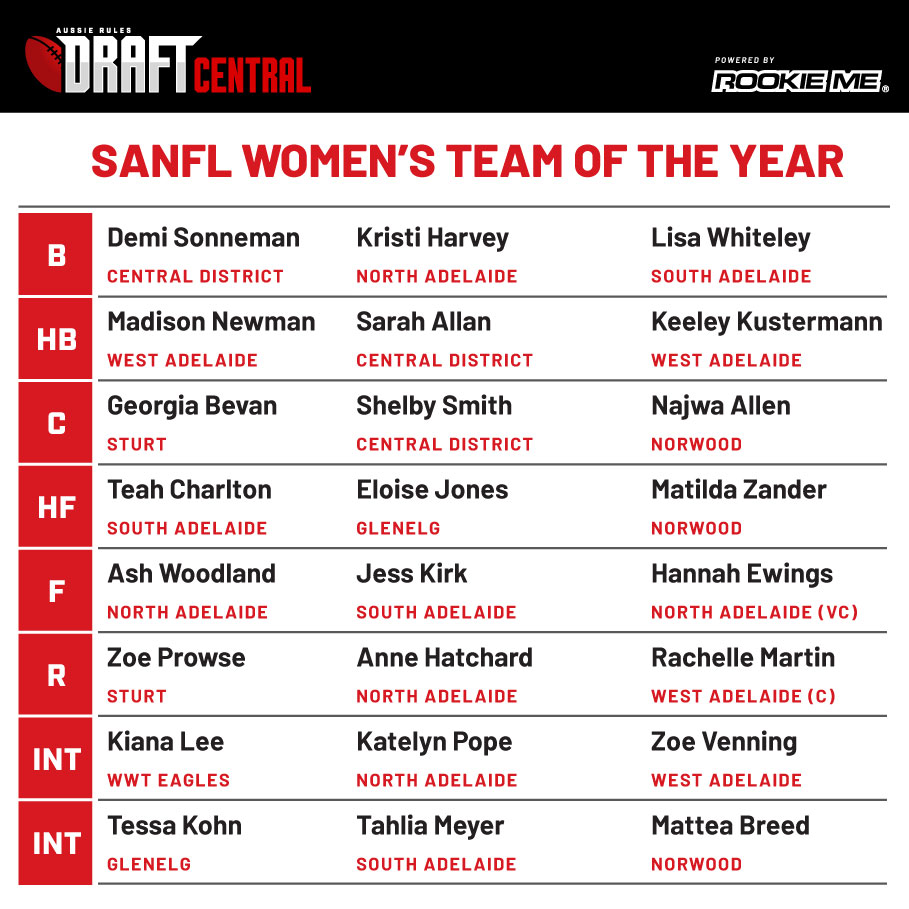 AFTER a terrific 2020 South Australian National Football League (SANFL) Women’s season, Draft Central has named its Team of the Year. The team is based off the amount of Draft Central Team of the Week nominations the players received throughout the season, with those players who received five or more nominations, automatically making the squad, while some players with four nominations also made their way in, and the others deemed as emergencies.

There were two players who received a remarkable seven nominations from 10 rounds, which were West Adelaide ball magnet, Rachelle Martin and North Adelaide youngster, Hannah Ewings. As the more senior member in the case of a tie, Martin was awarded the captaincy, with Ewings the vice-captain. Both players have had enormous years and have been magnificent for their respective sides.

A further three players received six nominations, with Roosters’ full-back Kristi Harvey, Norwood midfielder Matilda Zander, and Central District onballer Shelby Smith all making it into six Draft Central SANFL Women’s Team of the Weeks. Rounding out the automatic selections are an additional 10 players who made the Team of the Week at least half the amount of rounds of the 10-round season.

Looking at the team line-by-line, we start at the full-backs with Harvey holding down the crucial key position role, with Central District’s Demi Sonneman and Lisa Whiteley earning places in back pockets. Moving up to the half-back lines, a couple of West Adelaide defenders flank another Bulldogs’ talent in Sarah Allan, with Bloods’ teenagers, Madison Newman and Keeley Kustermann on the flanks.

Moving into the midfield, and it is no surprise to see Sturt young gun, Zoe Prowse make the side as the starting ruck, with Martin teaming up alongside Adelaide AFL Women’s talent Anne Hatchard onball. Smith has been named in the centre, while Sturt co-captain Georgia Bevan, and Norwood ball magnet Najwa Allen round out the midfield.

In attack, top-age young gun Teah Charlton sits on a half-forward flank with teammate Jess Kirk at full-forward. Ewings and Zander might spend a fair chunk of their time in the midfield, but also hit the scoreboard and earned places in the starting team. Glenelg’s Eloise Jones is the other key tall inside 50 at centre half-forward, while Roosters’ dynamo Ash Woodland is in a pocket.

To fill out the team, six players were required on the bench, and Kiana Lee is the first player there after unluckily missing out on a starting spot, and is the only Eagles’ talent in an even season across the board from Woodville-West Torrens. Players representing six different sides are on the bench, with speedsters Katelyn Pope (North Adelaide) and Zoe Venning (West Adelaide) as well as Redlegs’ tall utility, Mattea Breed. South Adelaide’s Tahlia Meyer and Glenelg’s Tessa Kohn finalise the entire team.

In the special Team of the Year, we have decided to name all six emergencies who received four Team of the Week nominations this year. Much like the bench, it is filled with players from six different sides. They are South Adelaide’s Czenya Cavouras, North Adelaide’s Lauren Daniel, Woodville-West Torrens’ Tesharna Maher, Sturt’s Hannah Prenzler, Central District’s Katelyn Rosenzweig and Norwood’s Bella Smith.

In terms of team representation in the 24-player squad, North Adelaide had the most with five players, followed by South Adelaide and West Adelaide with four apiece. Norwood and Central District had the three, with Glenelg and Sturt on two each, and Woodville-West Torrens having the one.

When looking at total nominees throughout the season, South Adelaide had the most with 15 different players earning a place in a Team of the Week, followed by West Adelaide and Woodville-West Torrens. The latter is the reason why the Eagles have the least amount of players in the Team of the Year with so many on the cusp sharing the load. North Adelaide had 13 players nominated throughout the year, followed by Norwood and Glenelg (10 apiece). Central District had nine, with Sturt the lowest with the six players nominated.