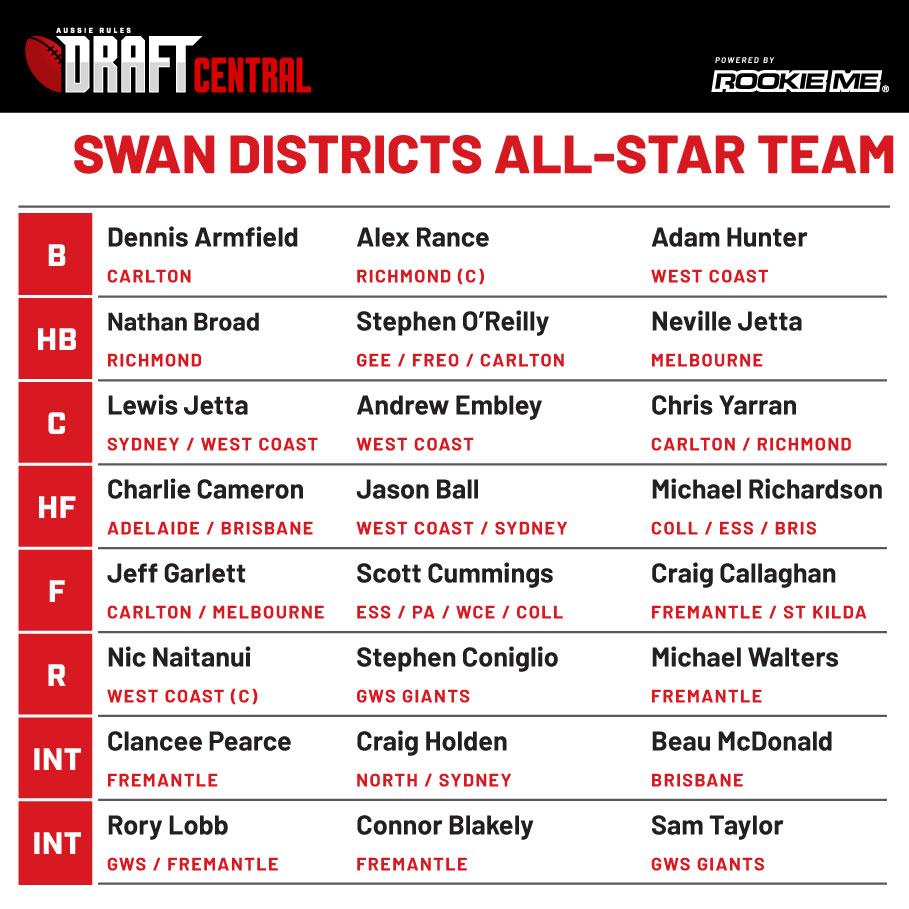 SWAN DISTRICTS’ All-Star Team of the AFL Draft era is another impressive one overall, with plenty of talent across the board, and a side that fans would love to see running around on the park. From contested marking talls, to athletic smalls and speedy midfielders, the Swans’ outfit is certainly one to marvel.

Swan Districts has a nice balance of talent in each of the thirds, with enough defensively-minded players to match their high level of offensively-minded ones. With Nic Naitanui dominating the ruck, and a lot of both past and present speedsters around the ground and bursting out of the stoppage, the Swans will creates headaches for any defence.

Starting in the back six, recently retired star Alex Rance holds down full-back with five All-Australians and a best and fairest to his name in 200 games of AFL football. He is paired with Stephen O’Reilly back there, winning a best and fairest himself in 146 games across three clubs. The other versatile tall is Adam Hunter who could play a multitude of roles, and we have named him in defence given the forward 50 strength.

Moving onto the other three medium to smalls, Dennis Armfield could lock down on a dangerous opposition small forward, while Nathan Broad and Neville Jetta would provide the dash and dare off half-back to set up an attacking move in transition. Coming off the bench, the Swans have Sam Taylor who might only have 30-odd games to his name, but is becoming a consistent key defender, as well as Clancee Pearce who could play a role there, as could All-Australian defender, Craig Holden.

Through the midfield, Naitanui is the star factor and point of difference in the ruck, but his midfield is equally as elite when it comes to speed and skills. Stephen Coniglio and Michael Walters are at the peak of their powers currently, and still have plenty of years left to continue their terrific form. Andrew Embley is another who has been named onball, and he is Swan Districts’ AFL games record holder, notching up 250 games to go with his Norm Smith Medal and premiership.

On the wings are Lewis Jetta and Chris Yarran who add the touch of speed and class to the outside, with Jetta’s footskills in particular renowned throughout the competition. Connor Blakely is on the bench ready to come on and rotate through the midfield, while the ruck depth at the club is quite impressive with Beau McDonald and Rory Lobb also waiting in the wings on the interchange.

The forward 50 is very exciting, as modern day small forwards Charlie Cameron and Jeff Garlett would be a nightmare at the feet of Scott Cummings and Jason Ball. While the latter two key position players were not the quickest players going around, they do not need to be in this team with the crumbers at their feet. Cummings won a Coleman and booted 349 goals in 128 games, while Ball played 193 games and kicked 159 goals, also playing through the ruck.

Speaking of playing through the ruck, Lobb on the bench would start inside 50 and likely have the freedom to remain a key forward, though if injuries struck, could also jump into the middle. Michael Richardson (171 games, 174 goals and an All-Australian nod) and Craig Callaghan (124 games, 94 goals) are the other two players who earn a spot in the side and provide some more goalkicking power up there.

Of the players not in the side, the ones with the most games are Jamie Bennell (87 games), Steven Handley (73), Brett Johnson (70) and David Ellard (63). In terms of modern day players, Marcus Adams and Griffin Logue would both be pushing for a spot in coming years.