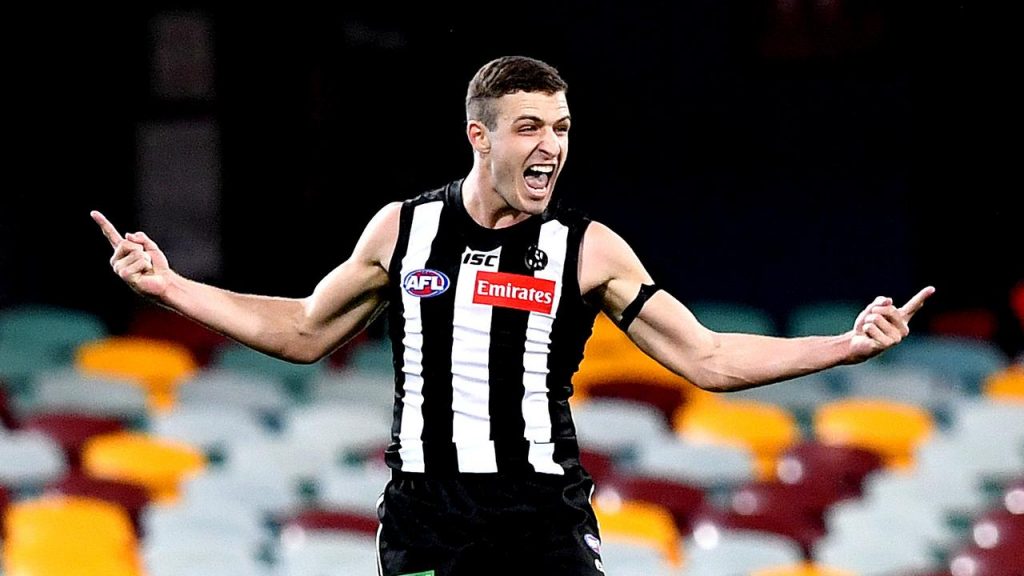 THE NUMBER of recruits from the 2019 AFL Draft to run out for their respective teams on the weekend again spilled into double digits, despite a few youngsters being squeezed out of senior selection. There was plenty to take out of Round 10 for the class of 2019, with a bunch of up-and-comers continuing to stamp their mark on the competition, while three made their debuts. We take a look at how the best handful of them performed.

The stats may not flatter, but Ruscoe has made a big impact at the elite level since his now famed debut announcement. Arcing back to a forward line role, the West Australian looked lively inside forward 50 for the Magpies. He kicked off his maiden outing in style by claiming his first goal with his second kick of the game, but spurned another three shots after that. The signs were there though and Ruscoe may well have earned his spot for next week amid Collingwood’s mounting injury crisis. He was the first debutant of the Pies’ 2019 National Draft haul.

Anderson continues to go from strength-to-strength and may well be the Rising Star frontrunner with over half the regular season played. While he has most often been utilised out on the wing, Anderson also spent some time among the engine room against St Kilda and pumped forward a couple of centre clearances. He was creative as ever going forward too, gaining good meterage in dangerous areas and getting forward to boot a nice goal as Gold Coast mounted a third term fightback.

He may not have been able to impact the scoreboard this time out, but Georgiades keeps on catching the eye. The West Australian key forward again got his marking game going in another Port Adelaide triumph, rising for three contested grabs among his total haul of five. He is proving a key link for Port heading inside forward 50 as a reliable target and sound user of the ball. That proved no different in this performance as he strung together three score involvements, including one goal assist. There’s plenty to like about the Power’s attacking stocks.

Another debutant in Round 10, Schoenberg was a handy addition to the Adelaide midfield on Wednesday night. He was taken quite high at pick 24 last year, but looks like having what it takes to repay the faith shown in him, and put in a decent debut performance. The South Australian did not win bucketloads of the ball, but found a good balance in his possessions. He was able to get his hands on the ball a few times at stoppages, while also pumping the ball into the right areas as he carried forward on the outer. Well built, and readymade.

Stephens is beginning to look more and more comfortable at the level having earned an extended run, and produced solid returns in his fourth AFL outing. Stationed on the wing, the South Australian looks most dangerous on his forward ventures, able to find space on the outer and deliver it well inside 50. He joined the first goal club this weekend with a great strike despite being put down hard by Brayden Sier mid-kick, putting the cherry on top of another promising display.