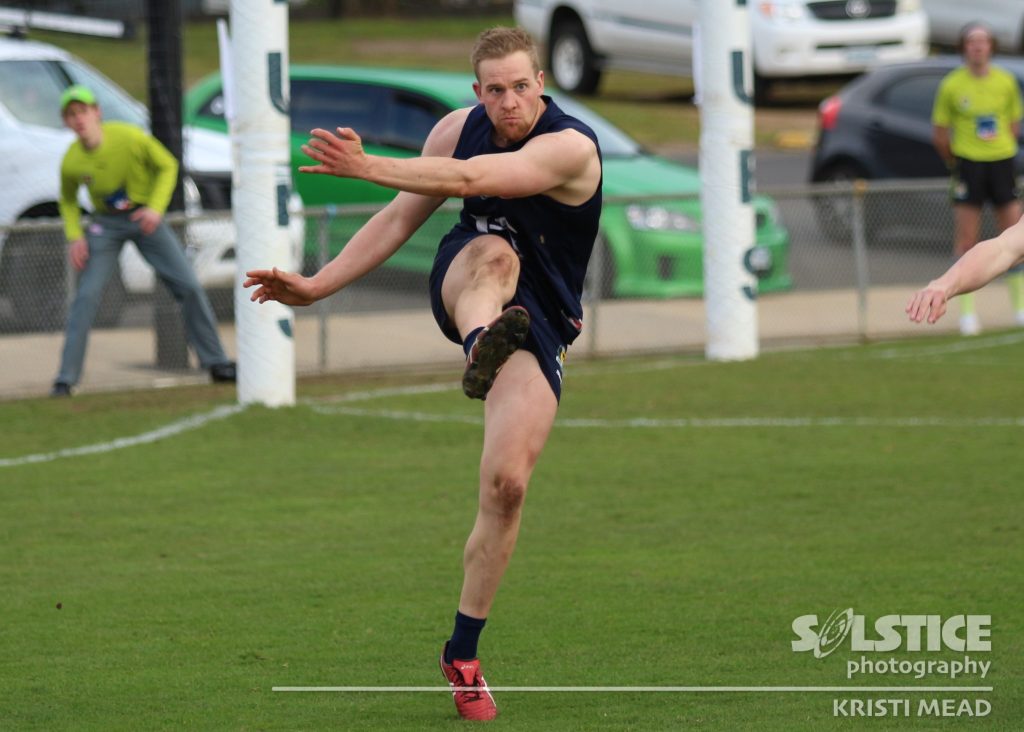 There is little doubt Launceston is the team to beat this season with the best offence and defence, as the only team above 250 points (276) and the only one conceding less than 130 (127) this season. They take on a much improved North Hobart team that has put its wooden spoon season behind it and picked up two wins in three games. The one loss was a gallant one against reigning premiers, North Launceston, but this is going to be an even greater challenge for the young Demons who have some terrific youth prospects.

Stringing back-to-back wins together, Jye Menzie and Nathan Harvey have each slotted five majors with Jake Steele (four) not far behind. Patrick Walker and Sam Collins are a couple of AFL Academy members to watch out for with plenty of talent. The key to stopping the Blues is limiting their damaging forward line, led by Dylan Riley (12 goals), with Jake Hinds (seven) and Mitch Thorp (five) not far behind. Jared Dakin and Collins might go head-to-head at some stage, whilst Tim Auckland is always a challenging player to beat around the ground. Yet to lose a game and sitting pretty eight points clear of their nearest rival – albeit with an extra game – they are the favourites in this clash.

North Launceston’s premiership defence has not started too bad this season, but dropping the Round 2 clash to Launceston would have hurt. They have since accounted for Clarence in a tough clash, and now face another challenger in Lauderdale that is looking to bounce back with a win after two consecutive losses. The Bombers prefer a lower scoring tight contest, and have done enough to keep the opposition under 70 points, but have not scored more than five goals in the past two weeks.

Lauderdale might look to leading goalkickers, Toutai Havea (seven goals) and Adrian Kalcovski (four) to kick a winning score, while their opponents have plenty of firepower up forward led by top-age talent Jackson Callow (five goals), and Brad Cox-Goodyer (four), while the likes of playing coach Taylor Whitford (three) and Corey Nankervis are always ones to watch.

In the final match of the round, Clarence will look to balance the ledger with a win against a winless Tigers side after going down in a tight contest to North Launceston last week. The Roos will be heavily fancied against a Tigers outfit that agonisingly came close to victory last week against Glenorchy but fell a point short. They have been competitive in two of their three losses, with a forgettable defeat at the hands of Launceston in Round 3.

Luke Graham (five goals) and Tyler Carter (four) have been shining lights in attack for Tigers, while Kieran Lovell is starting to get going for the league’s bottom side. Lachlan Gadomski and Oliver Burrows-Cheng are other talents who have been on the draft radar in year’s gone by and will be hoping to put their best foot forward. For the Roos, Noah Holmes booted four goals last week to race to equal second in his club’s goalkicking race with Oliver Preshaw, just behind Jeromey Webberley (five). Sam Banks is a name to watch out for next year while Oliver Davis should have plenty of time in the midfield throughout Clarence’s season as a top-age draft prospect.

In the women’s match between Clarence and Tigers, the Roos are comfortably sitting in second with a massive percentage and will head into the clash with Tigers as heavy favourites. The damaging aspect about Clarence is that the Roos have an even spread of players across the ground. Jessie Williams booted seven goals in the Round 2 win, but only had the one last week as Jacinta Limbrick took centre stage with four. Amy Prokopiec, Netty Garlo and Tahlia Bortignon are among the young talents to watch on the Roos list.

Meanwhile Brooke Phillips broke through for Tigers’ first goal last week in the heavy defeat, whilst Kiira Johns and Mikayla Absolom have been named in the best on both occasions. Priscilla Odwogo was named best-on for the Tigers in the Round 3 loss, while Hailee Baldwin is another player who can stand up on her day.

The red hot Launceston is ready to make it three from three after having a rest in Round 3. They completely dominated Tigers by 81 points in Round 2, after holding North Launceston to the same score (one behind) but found the going a little tougher by only scoring the 26 points. Glenorchy is coming off a thumping of Tigers too, winning by 85 points, though the Magpies fell to Clarence the week before by 32.

Daria Bannister leads the goalkicking after her three goals against the Tigers, and what makes the Blues such a damaging unit is different players stand up on different days. Angela Dickson is the only player to have kicked a goal in both games, with eight individual goalkickers in the Round 2 rout, including one to top AFL Women’s talent, Mia King. Camilla Taylor is an over-age tall to keep an eye on, whilst Jennifer Guy is another named in the best for both games thus far. For Glenorchy, Sarah Skinner and Tiarna Ford have combined for nine majors, with Skinner and youngster Jemma Webster named in the best twice, leading an equally talented young list into battle.

Glenorchy vs. Launceston
Clarence vs. Tigers