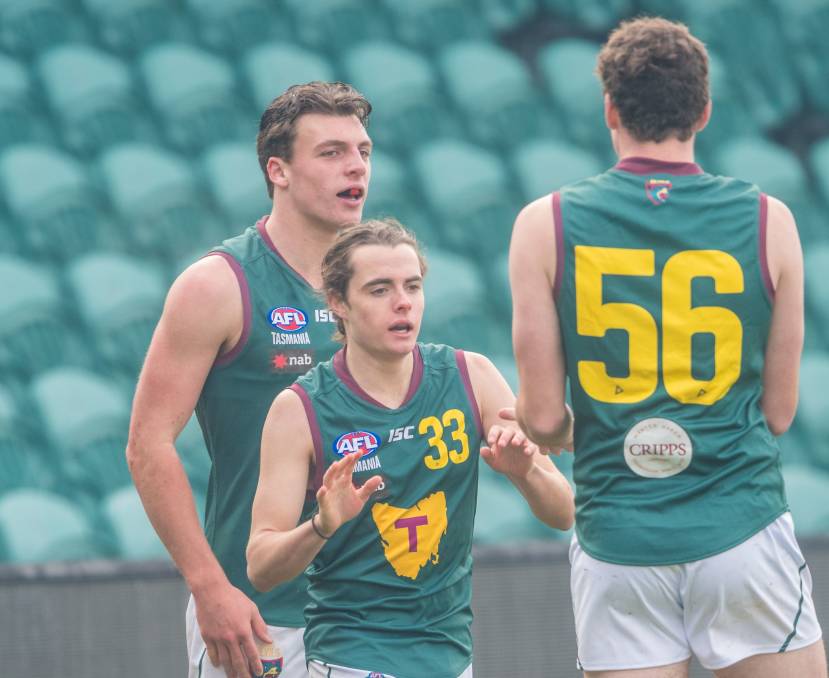 GUILFORD Young College booted six of the last seven goals of the game to come from behind and run over the top of St Patrick’s in the opening game of the SATIS Division 1 season on Wednesday afternoon. A two-goal final term to Tasmania Devils’ Lachlan Borsboom sealed the win for the visiting side who would have headed back down the Midland Highway pleased with an eight-point victory, 7.4 (46) to 6.2 (38).

St Patrick’s had the upper hand early after the game was moved from UTAS to St Patrick’s after the former was inundated with snow from the previous night. It meant Guilford Young had to make the trek up from the southern location to their opponents’ home ground and were on the back foot, but the visitors settled down, kicking the opening goal through big man, David Monks. His long-range set shot was soon countered four and a half minutes later by Angus Jeffries who got St Patrick’s up and about in a low-scoring opening term. Both sides were a goal apiece in wet and windy conditions.

The home team got the jump in the second term and controlled play to boot the only three goals of the second term. After being held well in the opening term – partially due to the terrible conditions for key forwards – Jackson Callow began to get involved, setting up scoring opportunities and even kicking a behind or two himself. Fellow Tasmania Devils talent Oliver Sanders marked inside 50 and handed his team the advantage, which had broken a fair goal drought. Firmly in control, Declan Chugg added his name to the goalkickers list with a major 25m out, with a last minute goal following a turnover from Oliver Davis to Callow who quickly played on and hit up Ben Hyatt one-on-one in the goalsquare. In what would be the last kick of the half, Hyatt turned around and booted it home, for a 4.2 (26) to 1.0 (6) half-time lead.

Callow had worked into the game in that second term, with Sanders and Angus Jeffries looking strong, as was Oliver Chugg. The Guilford Young captain, Davis had been one of the more prominent players in the first half, with AFL Under 16s Most Valuable Player (MVP) Sam Banks, as well as Sanders, Sam Collins and Dom White also busy.

The second half opened with a lightning quick clearance out of the middle from Tony Aganas who was moved into the ruck, roved his own tap and then kicked off the ground forward. A free was paid to St Patrick’s, but the quick give off to Sanders had a fifth goal – and his second – for the home side in the opening minute. From then on though, Guilford Young owned the game. Coach Blair Brownless shuffled around the magnets and got the visiting team moving the ball more aggressively and it started to show on the scoreboard. As the lead had got out to 26 points at one stage, the losing side hit back with three goals, starting with key forward Noah Holmes‘ snap around his body. Darcy Gardiner made it two with a similar attempt midway through the term, and then a silly free kick against the home side for bowling over Banks in midfield gave Davis a 50m penalty and brought him to within range. He duly delivered for his side’s third consecutive goal, and while the home team had a real chance with a few minutes remaining going deep inside 50, Patrick Walker clunked a huge contested grab to save the day.

After a disappointing second half of the third term, St Patrick’s needed an early major in the last to steady the ship, and once again it was Aganas who got the ball moving out of the ruck straight to Zach Morris. He unloaded from 50m with the breeze and all of a sudden the home team was back in control with a 6.2 (38) to 4.1 (25) lead in wet and windy conditions. But, in what was also near-identical to the third term, Guilford Young through everything at St Patrick’s in what would be a memorable final term. Borsboom became the match winner with two final term goals, starting with a quick answer to Monks’ major a few minutes later. Out of nothing the Tasmania Devils’ talent snapped around his body for a goal, and then Ned Ward made it two not long after to level the scores.

With the teams neck-and-neck through the midpoint of the quarter, it looked as though Holmes would be the saviour with a mark not too far out from goal after a strong mark following an end-to-end play. A Banks tackle in the middle had set up the scoring opportunity for the Clarence big man, but he sprayed it to the right. His behind was enough to put his team in front though, and they never surrendered the lead. Marking straight from the kickout, Holmes had another chance, albeit from much further out. It was on target but rushed across the line, but crucially it handed the visitors a two-point lead. Then came the match-winner in Borsboom who won a free kick 15m out on a tight angle after a frustrated Callow gave away a free kick at the top of the defensive 50 for being double-teamed. Borsboom delivered for the second time in the term to hand his side the comfortably lead, and they held on from there.

The turnaround occurred because Guilford Young dared to dream and attacked relentlessly in the second half, as St Patrick’s had chances, but were slower with the ball movement and had tried to stem the momentum against Guilford Young such as throwing Callow behind the ball. Unsurprisingly, Borsboom was one of the winners’ best, with Davis and Banks playing key roles, and Homes providing a target inside 50. Callow worked hard throughout the game, while Sanders was terrific, as was Aganas and Hyatt, but to no avail.

The victory got Guilford Young off to the perfect start in the SATIS Division 1 season, with the second Round 1 game between Hutchins and Scotch Oakburn to take place on Saturday at 1.30pm. St Patricks then home to take full advantage of Scotch Oakburn’s four-day turnaround with a clash back at St Patrick’s next Wednesday, while Guilford Young has an extended break until Saturday, August 15 when it hosts the fifth side in the division – Grammar.