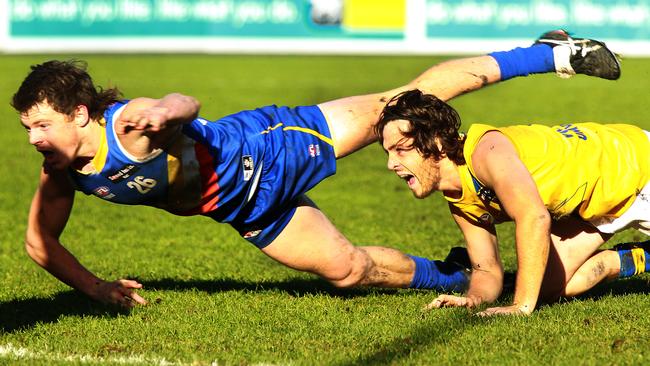 IF you are missing footy like we are, then let us somewhat salvage that with a look back in our series of Classic Contests. In today’s contest we look at one of the would-have-been Round 19 clashes in the NAB League this year between the Eastern Ranges and Western Jets. In this edition we wind back the clock to 2014, when the two sides met for a mid-season clash at Box Hill City Oval.

Only percentage separated the Western Jets (third) and Eastern Ranges (sixth) before their Round 10 TAC Cup clash in 2014, making for what would be a scintillating contest. Both sides boasted 5-4 records to that point and had accumulated their wins in identical fashion. After dropping their first three games for the season, they would embark on five-game winning runs, before both going down in Round 9. With five teams on five wins creating a logjam among the top eight, premiership points were at a premium.

Plenty of draftees came out of either region throughout the 2013/14 period too, though names like Christian Petracca and Ryan Clarke would miss for Eastern, while Western went in without Liam Duggan, Corey Ellis, Jayden Laverde, and Dillon Viojo-Rainbow. Of the future AFL-listed players to take the field were bottom-agers Blake Hardwick and Sam Weideman for the Ranges, with Connor Menadue the lone prospect in that category for Western.

In a high-scoring opening term, Western found a way to edge ahead with four goals to three, acclimatising well to conditions on the road. The Jets would extend their even one-goal lead out to three at the main break, and it seemed as though they would be able to cruise home as the buffer sat at a very handy 23 points heading into the final change.

But Eastern would not go down without a fight, and managed to produce its best term of football at the death. Four unanswered goals helped the Ranges sneak ahead with under five minutes left to play, and it looked for all hope that they simply had more left in the tank – not to mention all the momentum. In need of a hero, Menadue stepped up for Western to boot his side’s only major for the quarter and save the Jets from heartbreak, as they held on to win by four points.

Skipper Luke Hannon was named Eastern’s best for his 31 disposals and 12 tackles, in front of a debuting Jayden Collins. Weideman showed his high-level potential with three goals, while Hardwick added two in a role much different to what he plays for Hawthorn, and Matthew Traynor found plenty of the ball (26 disposals, one goal).

The Jets would go on to add three more wins to its regular season tally to finish with a positive record (9-8) in sixth, but were bundled out in an elimination final at the hands of Dandenong. Eastern slipped as well, missing out on finals by two games with a 7-10 record to slot in to the unwanted ninth place.