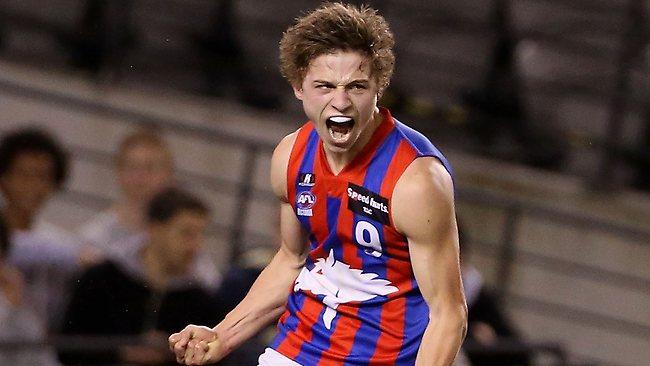 IF you are missing footy like we are, then let us somewhat salvage that with a look back in our series of Classic Contests. In today’s contest we look at one of the would-have-been Round 18 clashes in the NAB League this year between the Oakleigh Chargers and Geelong Falcons. In this edition we wind back the clock to 2012, when the Falcons pushed a talent-rich Chargers lineup all the way at Warrawee Park.

16 future AFL draftees took the field as Oakleigh and Geelong battled in Round 13 of the 2012 TAC Cup, with a stacked Chargers lineup looking to gain redemption on home turf. The Falcons had comfortably triumphed in the Round 5 reverse fixture, coming away 42-point winners at Kardinia Park.

That result was part of their even 6-6 record to that point, good enough for eighth spot. Oakleigh was faring slightly better despite the upset, sitting fifth at 7-5. Both sides came in on winning streaks, with Geelong getting home in three-straight close encounters, while Oakleigh took out its previous two outings.

While there was plenty of quality on each line, both teams got off to slow starts and failed to truly get a hold on the scoreboard. The Chargers in particular had failed to capitalise on their weight of early chances, booting 1.4 in each of the opening two terms. On the other hand, Geelong’s three second quarter majors ensured the Falcons would take a lead into half time, albeit by the narrowest of margins.

The game opened up slightly after the main break as Oakleigh’s guns seemed to recover their kicking boots, fixing up in front of goal to reclaim the ascendancy with four goals in term three. The Falcons were sticking right by them though, booting three goals of their own to remain just a goal adrift. That buffer would prove just enough for Oakleigh, who managed to hold on as the two sides sunk a couple of goals each to round out the game.

The Falcons would stay true to form and go on to finish the regular season in eight with an 8-8-1 record. Sandringham was the team to bundle them out of contention at the semi finals stage. Oakleigh famously went on to win the TAC Cup premiership from sixth that year, accelerating through finals on the back of a 10-7 record to pip Gippsland via Jack Macrae‘s golden point in the decider.