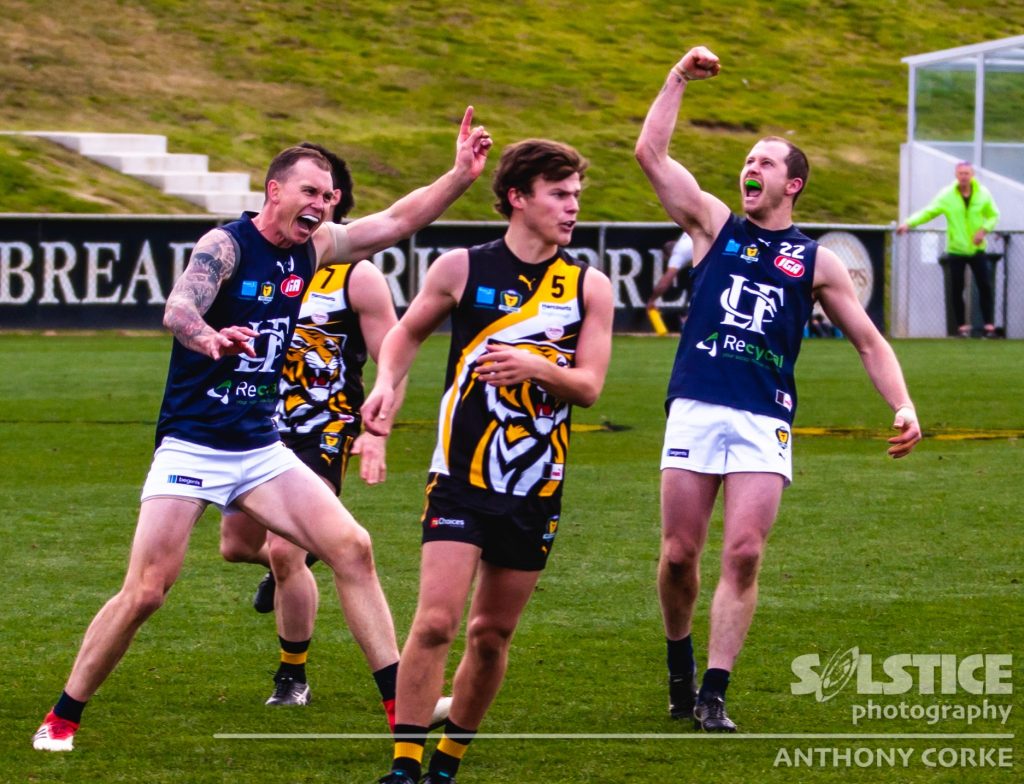 LAUNCESTON showed why they are top of the ladder as they won their fourth game of the season resisting a mini Lauderdale comeback in the fourth term as they drove away to a 22-point win.

Launceston’s Dylan Riley was outstanding at full forward as he kicked four goals, as well as Alec Wright kicking two in the 9.8 (62) to Lauderdale’s 5.10 (40), as Adrian Kalcovski kicked two goals in the losing side.

Launceston started the first term in complete control as they kicked away to an 18 point margin, as Jobi Harper and Jared Daikin both kicked a goal each, while Riley bagged two of his four majors in the first term. Lauderdale struggled and only managed to kick one goal coming from Nat Franklin.

The Bombers started the second term the brighter despite not putting any pressure on the scoreboard as they tried to lock the ball inside their forward 50. Despite Lauderdale’s forward dominance five minutes into the term, the Blues were the ones who made the most of their chances, as Riley bagged his third goal of the afternoon off the back of some smart play by Jack Hinds.

Lauderdale would not give up though and finally were rewarded for their earlier forward dominance, as Kalcovski goaled from a tight angle in the forward pocket, to get the Bombers back into the contest. Despite having multiple chances at goal in the second term the Bombers only managed one goal while entering the main break trailing the Blues by 14 points, 5.3 (33) to 2.7 (19).

Before the umpire signalled the bounce of the ball to start the second half, Launceston had already extended their lead to 20 points when the umpire awarded Hinds a free kick, and he made no mistake directly in front, in a strange way to start the third quarter. After the unusual opening of the third term, much of the play was end to end as both sides collected turnovers from their momentum going forward, with the Blues often going through the corridor while the Bombers often opted to go through the left-wing.

Alec Wright kicked the Blues second for the term after getting out of a stoppage and snapping around the body to make it a 27-point ball game. Tyler Martin tried to ignite a counter-attack through the right-wing for the Bombers, but poor skills let them down as Jack Smith defused the attack, as they went into the last break trailing by 24.

The last quarter was filled with a gung-ho attitude and if you blinked you would miss it, as there were five goals in 12 minutes. Lauderdale kicked the first two goals within the first five minutes as Kalcovski and Rhys Sutton cut the deficit to 16 points. The Blues responded a minute later when Riley kicked his fourth goal, to give a 22-point breathing space to Launceston.

Lauderdale’s full forward Toutai Havea brought the Bombers back into the contest after he was on the receiving end of a pass from Kalcovski and converted his set shot to bring the margin back to 16 points. The Blues responded when Jack Donnellan kicked his first goal of the game and the home side’s ninth to extend the lead back to 22 points.

The last few minutes of the match, the Blues tried to find an avenue to goal but the Bombers defence stood tall, as the home side went away with a 22-point win and remained undefeated.

In other results, Glenorchy held on for a thrilling one-point win over Tigers in the battle of the winless sides. Jaye Bowden booted five goals in a standout best on ground performance for the Magpies as Matthew Joseph (two) was the other multiple goalkicker for Glenorchy in the 12.7 (79) to 11.12 (78) victory. Tigers’ Kieran Lovell got back to his best that took him to the elite level with a starring role for the Tigers thanks to two goals and named his team’s best. Meanwhile Cooper Sawdy and Will Campbell were also strong in the victory.

North Launceston picked up its second win of the season with a 7.12 (54) to 6.3 (39) victory over Clarence at UTAS Stadium. The Bombers led at every break, but were not able to capitalise as much as they could have on the scoreboard, whilst the Roos made more of their chances, but could total enough of a score. Noah Holmes was a lone hand up forward for Clarence, booting four of his team’s six goals, while Clint Riley and Ethan Jackson were solid. In a winning team, Jack Rushton kicked a couple of majors and was named among the best, whilst the likes of Brad Cox-Goodyer (one goal), Alex Lee and Josh Ponting were also named in the Bombers’ best.