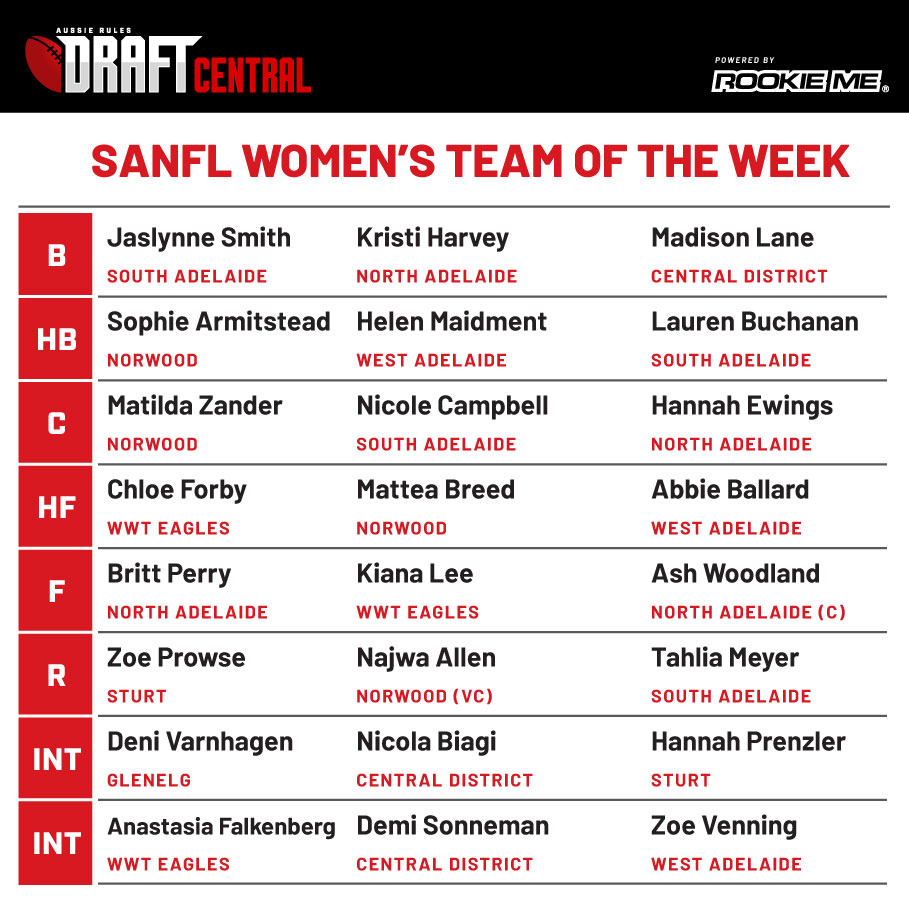 YOUTH is the highlight of the final Draft Central South Australian National Football League (SANFL) Women’s Team of the Week. The top three teams shared in 12 of the 24 players this round with North Adelaide, South Adelaide and Norwood all having four representatives in our side this week. Three of the other five teams – West Adelaide, Central District and Woodville-West Torrens – had three representatives in an even team spread, while Sturt (two players) and Glenelg (one) rounded out the side.

South Adelaide’s defence on the weekend was ultra impressive and that is why a couple of their back six make the starting team in Jaslynne Smith and Lauren Buchanan. Samantha Pratt made it into the extended side as an emergency, while through the midfield, Nicole Campbell and Tahlia Meyer also made the team. For their opponents West Adelaide, the Bloods had three representatives with key defender Helen Maidment at centre half-back, and youngsters Abbie Ballard and Zoe Venning slotting into the side.

North Adelaide’s quartet starts with captain of this team, Ash Woodland who had a starring four-goal role in the Roosters’ big win. Holding down the fort at full-back is Kristi Harvey, whilst another forward in Britt Perry, and the classy Hannah Ewings all made the side once again.Their opponent Central District had its fair share of defenders in the side too, with Madison Lane making the starting side, and Nicola Biagi and Demi Sonneman both squeezing onto the bench.

Norwood also had the four players make the Team of the Week after a big win over Glenelg. Starting at half-back is Sophie Armitstead who spent a fair chunk of time in the midfield but can slot back there, whilst Matilda Zander is on the wing Up forward, Mattea Breed stands at centre half-forward, whilst Najwa Allen is in the team once again onball and vice-captain in our team this week. The Tigers only had one player in the side with Deni Varnhagen on the bench, though Lucy Armitage came close to making it and is one of our emergencies.

Of the remaining players, there were a combined five players in the Woodville-West Torrens and Sturt clash in the 24-player team. Chloe Forby and dual position player Kiana Lee are inside 50, whilst Anastasia Falkenberg has made it onto the bench. In defeat, Zoe Prowse once again made the side in the ruck position, whilst Hannah Prenzler returned to the side on the bench. Eagles’ Charlotte Dolan is the third emergency in the side after another solid performance in the win.

DRAFT CENTRAL SANFL WOMEN’S TEAM OF THE WEEK: ROUND 10