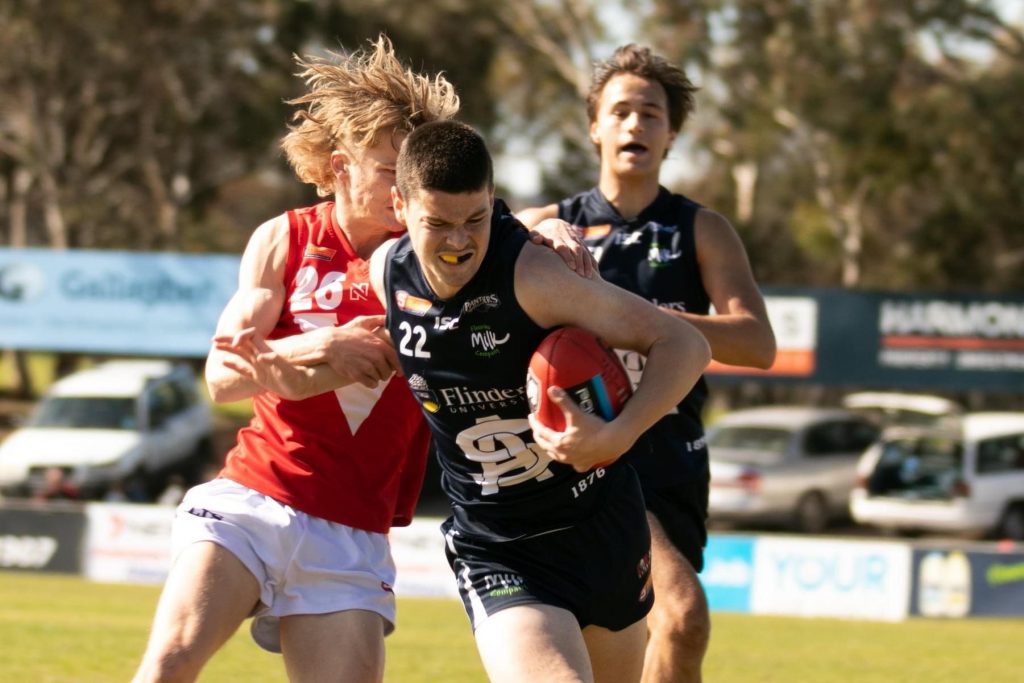 THE TOP junior prospects from South Australia rolled on into Round 6 of the SANFL Under 18s competition, with a number of standouts continuing to emerge. In this edition of Caught the Eye, we have compiled a list of the best and most promising performers from across the weekend, with one representative from all eight SANFL clubs. For extended profiles on each AFL Academy member listed, click on their names highlighted in red. For our full weekend scouting notes, click here.

Our scouts said: “Flett was arguably the most damaging member of South’s steady back six, providing a cool head on the last line while also attempting to break the lines on the rebound. His left foot would become a weapon, used to attack as he took on some nice cross-field passes and gained serious distance. The short-range game was there too, able to hit up easy outlet kicks to help his side maintain possession.” – Michael Alvaro

Verdict: The South Adelaide defence was terrific on Saturday, with Harry Spacie named best afield. Most of the back six benefitted from the Panthers’ high possession, kick friendly style of play coming out of defence, but Flett took the game on whenever he could. The ability to both attack and defend from the back half is important in setting prospect apart, and Flett did just that on the weekend to provide a key point of difference.

Our scouts said: “Harrison’s dash and dare from midfield was again a feature for North Adelaide, as he popped up in exciting spurts… The bottom-ager clicked into gear as he began to accumulate the ball on the outer of stoppage situations, using his five-step burst to accelerate forward and take the game on.” – Michael Alvaro

Verdict: North Adelaide has an exciting batch of bottom-agers and 16-year-olds who look like very handy players already. Harrison is one of them, and he continues to thrive upon gaining some added responsibility with the likes of Jamison Murphy out of the side. His speed coming away from the contest is great to watch, and he really helped to generate some forward momentum for the Roosters after a horrific start to the game. Any player able to penetrate both arcs and win clearances is likely to have an impact, which is exactly what Harrison was able to do.

Our scouts said: “Linke is in red-hot form for the Bulldogs and impressed on Saturday with another strong performance… Remarkably, 26 of Linke’s disposals were kicks, showing how much confidence he has in himself to make the right decisions going forward with the ball.” – Tom Cheesman

Verdict: Our scouts said it, Linke is in red-hot form. The tall midfielder is really benefitting from being able to attend more centre bounces for the Bulldogs upon some changes to the side, and continues to show his ability to find the ball in all areas. His 189cm frame helps him to impact aerially, while a solid endurance base means he can also get forward and still find the goals. Still has room for improvement as a bottom-ager, but is showing nice signs.

Our scouts said: “Bottom-ager Burgoyne produced one of his best performances at Under 18 level on Saturday. He spent more time than usual in the midfield, which led to him being the leading disposal winner on the ground. His acceleration and elite ability to change direction wreaked havoc on the opposition, as they quite simply could not stop him from linking up with teammates through the middle and transitioning the ball forward.” – Tom Cheesman

Verdict: Speaking of bottom-agers in hot form, Burgoyne has really taken his game to the next level in 2020. The potential Port Adelaide father-son (2021 eligible) has mixed his time well between midfield and defence, while also showing an aptitude up forward in recent weeks. He has no trouble finding the ball and uses it cleanly, proving especially effective with his relieving short kicks in open play. Port fans should be watching with interest, as they could have a couple of very handy freebies over the next two years in Taj Schofield and Burgoyne.

Our scouts said: “Chamberlain’s trend of getting back to help the defence again came to the fore, as did his bursts from congestion. A few quick steps, and he would gain separation from his Norwood opponents. A real positive in his game was the ability to mix clearing kicks with calm use by hand and shorter-range execution via foot, which adds another dimension to his midfield craft.” – Michael Alvaro

Verdict: In a struggling side, Chamberlain continues to try his heart out. He is the soul of West Adelaide’s midfield and is working on his own game quite soundly, too. The small, but explosive midfielder had the obvious weapons of his speed and ball winning capacity to start 2020, but has shown a terrific appetite to work around the ground and mix up his disposal with more handballs and short-range kicks. His use by foot is beginning to look cleaner, making for more polished performances. Under such constant heat from the opposition, it’s great to see.

Our scouts said: “We’re beginning to run out of superlatives to describe Murley, who continues to impress as Norwood’s prime midfield mover – in his bottom-age year, no less. He looked busy from the outset and showed his smarts early with some deft inboard kicks, while also getting to all the right spots at the drop of the ball.” – Michael Alvaro

Verdict: The Under 18s MVP for Round 6 rightly earned that honour with a blistering performance from midfield. His ability to swing forward and find the goals has been a real asset over recent weeks, but on this occasion, Murley fared even better as a pure midfield outlet. He is another who has no trouble finding the ball at the contest, and his speed coming out of congestion is breathtaking. That kind of attribute lends to an outside game too, and Murley’s repeat forward running also helps in that department. He looks a real first round candidate for next year, regardless of his size and slender frame.

Our scouts said: “It was a difficult day for the Tigers, but the performance of Davis will have impressed the Glenelg coaching staff. He was involved in almost every positive passage of play for the Bays and booted the clubs’ first two goals of the contest in the second quarter, thanks to some handy roving.” – Tom Wyman

Verdict: Davis has been a real asset for Glenelg’s weakened side over the past fortnight, able to impact all around the ground and incite some positive forward momentum. He looks to have a good deal of football smarts, using it to not only get in the right positions around the ball, but also impact the scoreboard when roaming forward. The Bays’ depth has been tested, but Davis is standing up to it as a bottom-ager.

Our scouts said: “Powell was always on the move at stoppages, either going in hard and winning the contested ball or looking to use his burst of speed to accelerate away from congestion and send it forward. He was regularly at the bottom of packs, wrestling for possession and looking to force out a handball.” – Tom Wyman

Verdict: How much more can we say about Powell’s remarkable start to the season? His consistent form is nearing ridiculous at this point, and he has been nothing short of dominant as a permanent midfielder. While onlookers may not always catch every one of his touches on the inside, he simply finds a way to get first hands on the ball and use it cleanly. Having again booted multiple goals, Powell seems to be sending the message that he has added weapons to his arsenal, and is more than your Tom Mitchell type of accumulator. He is beginning to have that impact to match his statline, which is promising.