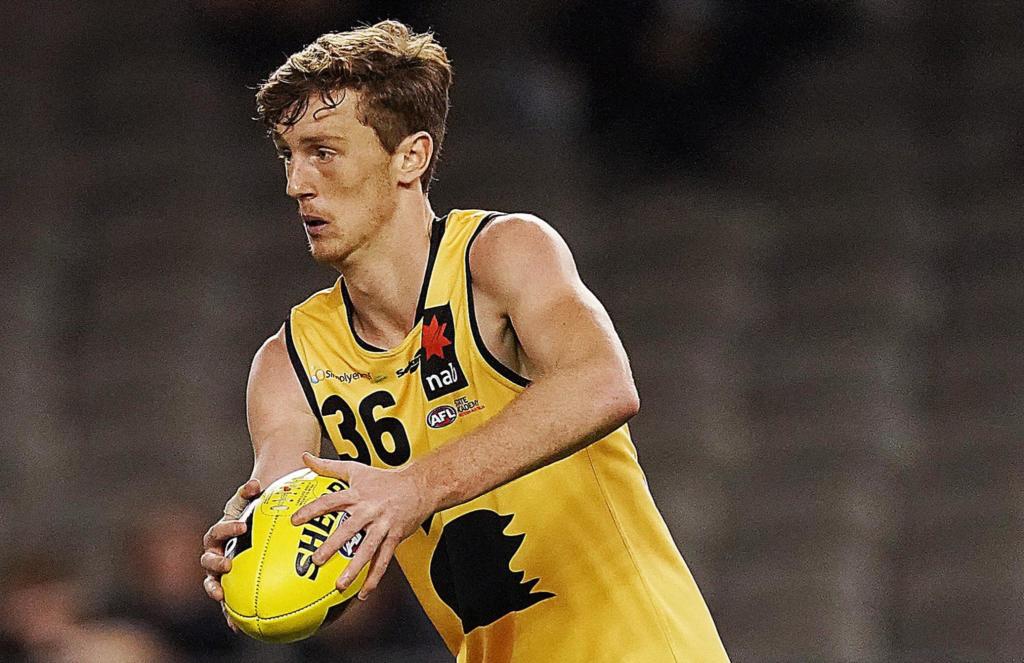 IN continuing our extended weekly Player Focus series, we take a look at a West Australian Football League (WAFL) talent who has really stood out on the League stage. In Round 3 of the competition, our eyes were on Swan Districts key defender Denver Grainger-Barras, who was one of his side’s best players in a tough 39-point loss to reigning premier, Subiaco.

WAFL LEAGUE STATISTICS
Round 3 vs. Subiaco

With fellow draft hopeful Logan McDonald having the bye this week, it was time for Grainger-Barras to put his name in lights. He certainly did that, being named best on ground in Swan Districts’ loss to powerhouse club, Subiaco. It was an impressive aerial display, showing why he is so highly credentialed already.

On top of his League debut coming last year, Grainger-Barras was also awarded the AFL Life Members Scholarship which has been won by some of the greats of the game including Luke Hodge, Joel Selwood, and last years Rising Star winner Sam Walsh. It’s an award that’s been given to eight number one picks and numerous top 10 picks on top of that, including highly rated Docker Hayden Young. With Fremantle holding a top five pick currently, he might be right in the mix there.

Grainger-Barras started each quarter on the bench but whenever he came on he made an impact, and his first few touches of the game weren’t wasteful. He first received a switch kick and next darted a nice low pass down the line, later receiving a handball and quickly switching the kick long to show good, quick thinking.

His next few highlights though may have been his best of the day; with the first deep in the goalsquare where he attacked the loose ball at speed. showing incredible confidence, speed, and agility to also get separation from the opposition and then kick long out of the defensive 50. The next highlight just showed off his pure talent and leap, where he came over the top of two players to take a screamer. Arms outstretched, the footy stuck in is hands, but he would also quickly play on as if the mark was all in a day’s work.

There weren’t as many pure highlights in the second quarter but Grainger-Barras showed despite his light frame, that he could compete well at ground level with plenty of efforts and tackles deep in defence. He did some nice work up the ground as well, winning a free kick in the middle of the ground and naturally playing on as quickly as possible to kick long inside 50, albeit with a fraction too much on the kick for his leading teammate.

One of the better bits of play came when the ball hit ground level on the wing, where he attacked the line of the ball while also kicking over an oncoming opponent and still keeping his feet to gather the loose ball cleanly. He then gave off the quick little handball and in the same motion, laid a nice bump to protect the ball carrier. It was perhaps the best showcase of what coaches will love about him at AFL level as despite his light frame, he was able to compete with senior bodies while making it look effortless and just doing everything you could ask for – from his ability to keep possession and also block for his teammate, to embracing body contact which many young players try to avoid.

The third quarter was where Grainger-Barras really got to show off his elite intercepting ability and it was highlighted in two bits of play very close to each other. He was able to intercept a handball with a one-handed pluck easy as you like, and then banged the ball long out of defence. The kick came back in just as quickly but again, easy as you like, Grainger-Barras was able to take a nice intercept mark in the exact same spot where he intercepted the handball.

His smarts to intercept both times was certainly eye-catching, but instead of again getting sucked into kicking down the line again – which obviously didn’t work the first time – he made a point to think firstly on hitting that switch kick. It showed his smarts and ability to adapt to a situation and learn.

As the game wore on it would seem he had developed a knack of being in the right spot at the right time to foil Subiaco’s attempts at goal, and he would again get in the way with a fantastic intercept mark sitting in front of the only one-on-one contest inside 50. With eyes only on the ball, he was able to take the outstretched mark in the hole. As he had done all day long, Grainger-Barras quickly played on with a kick inboard, understanding the stakes of the game. It would lead to Swan Districts moving the ball end-to-end for a goal.

Unfortunately, he gave away a free kick just on the three quarter time siren which luckily only resulted in a behind, but there was a bit of a scuffle with himself and the opposition and he certainly wasn’t afraid to get involved and get lippy with his older and stronger opponents. Already he has shown he isn’t afraid of a bit of physicality despite his size, and with his ability to intercept at crucial stages, it only adds to his ability to get under the skin of the opposition.

His last quarter was his quietest as he failed to register a disposal. He had a bad moment at around the 16-minute mark where he gave away a push in the back free kick which lead to a goal, which was perhaps his only blemish in the game.

However, he wouldn’t let that get him down as later in the quarter he would spoil a marking contest, showing his impressive leap. Once the ball hit the ground he was quick to compete with multiple tackles and efforts and after that bit of play, it wasn’t hard to see why the coaches named him best on ground as he drove defensive standards all game which is impressive from such a young player.

A lot of attention out of Western Australia has gone to fellow young gun, McDonald but Grainger-Barras reminded everyone that he is very much a top five caliber talent, showing all of the traits that make him such a sought after prospect. The elite intercepting, competitiveness, clean hands and skills, athleticism, and especially the footy smarts were all on show. A game like this can only help him grow in confidence and although his disposal numbers are low, his impact is just so high and we may be looking at a future All-Australian centre half-back in the AFL.