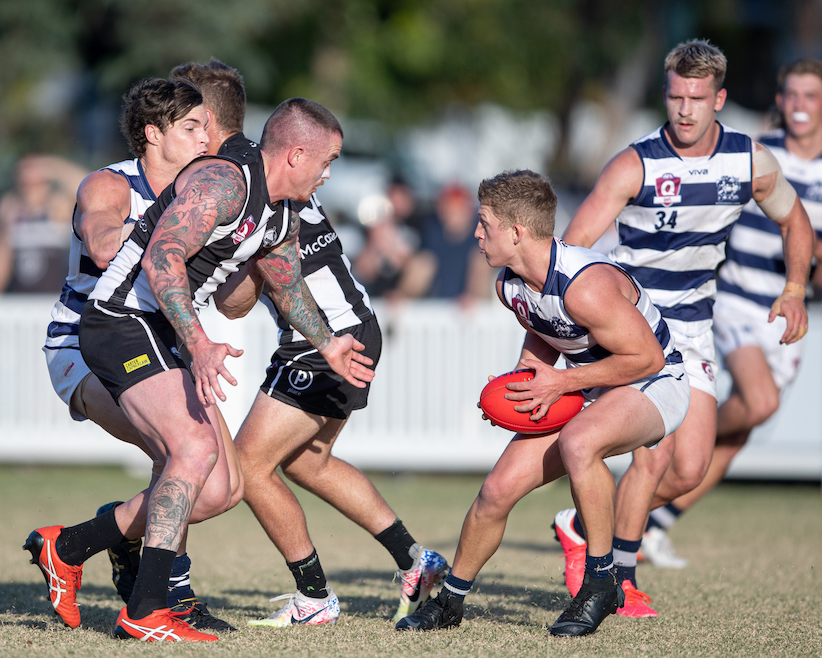 A WEEK after Mt Gravatt snatched its first win over Maroochydore by a point, the Vultures were on the receiving end of the narrowest result, going down to Wilston Grange by that exact margin in Round 4 of the Queensland Australian Football League (QAFL). The Gorillas leapt off the bottom of the table in the process, leaving Labrador as the only winless side and the Tigers unable to do anything about it on the weekend having had the bye. In other results, the top three sides in Palm Beach Currumbin, Morningside and Broadbeach all recorded wins.

In the game of the round, Morningside enjoyed a come-from-behind victory over reigning premiers Surfers Paradise, handing the Demons their second loss from three games. The Panthers moved to 4-0 on the table with the 8.9 (57) to 8.7 (55) victory, which saw them boot five goals to two in the second half to run over the top of their opponents. The Demons led by as a much as 20 points at the main break and 13 points heading into the final term, but could only manage one major to three in the final term to go down by a narrow two points.

Matt Hammelmann continued his good form with three majors for the Panthers, as Reuben Williams slotted two and was named amongst the best. Lachlan Russ, Thomas Griffiths and James Cowlishaw were also impressive in keeping the Panthers’ undefeated start to the season alive. Young talent Max Pescud booted three goals in Surfers Paradise’s defeat, named among the best as only one of two multiple goal kickers for the Demons. Tyson Brazel (two goals) was the other, whilst Jack Brauman (one) and Myles Jewell stood out in the match.

A match-winning goal to Kuot Thok in the 22nd minute of the final term helped the Gorillas secure a much-needed victory over Mt Gravatt. Wilston Grange burst out of the blocks in the opening term to boot three goals to one, but only managed two goals in the next two quarters as they watched their lead evaporate and eventually disappear completely with the Vultures taking an eight-point advantage into the final break. Luckily for the home side, they got their act together with two early goals, before the Vultures hit the front in the last five minutes, only for Thok to stand up and win the match with a vital major.

Aaron Fabian and Josh Baxter both booted three goals in the win, while Taylor McCubbin, Andrew Boston and Lions’ Academy member Tahj Abberley were named among Wilston Grange’s best. For the Vultures, Harry Milford was the sole multiple goalkicker with two snags, as Kyle Walsh (one goal), Orien Kerr (one) and Luke O’Sullivan all stood out in defeat.

Palm Beach Currumbin has flexed its muscles in a commanding 61-point victory over Maroochydore on the road. Last year’s grand finalists continue to look like the team to beat, shaking off an early challenge from the Roos to run away with the contest. Early in the second term, the Roos drew within six points, but only scored another three goals from there as the Lions piled on 13 of the next 16 majors, including an eight goals to two second half to storm to a 17.5 (107) to 6.10 (46) victory.

Jarryd Douglas slotted three majors, but was far from alone with another five multiple goalkickers, including Tyler Cornish, Jack Bates and Brock Askey who all slotted two majors and were named in the Lions’ best. Zac Harrison and Nicholas Crowley were also impressive in the huge win. For Maroochydore, Mitchell Scholard‘s goalkicking form continued with another four snags taking his total to 12 from three games. Unfortunately he was once again a lone target up front with the team only booting the six majors. Brent Pearson, Josh Govan and Jacob Simpson were the best Roos on the day.

In the other game, Jordan Moncrieff and Josh Gore had big days out to lead Broadbeach to a stunning 15.13 (103) to 10.6 (66) victory over Sherwood. Piling on seven goals to three in the opening term, the Cats immediately had the upper hand, but had to fight for it through the middle of the match as the Magpies closed the gap to four goals at the final break. A four goals to two final term in favour of the visitors saw the margin blow back out to 37 points by the final siren.

Moncrieff was once again best on ground as he led his side with seven majors to be the leading goalkicker in the competition with 17 from three games at almost six a match. Over-ager Gore played a very handy supporting role wiht four snags, whilst Blake Erickson, Josh Searl and Harrison Arnold were also impressive in the Cats’ big win. Former Brisbane talents, Claye Beams (three goals) and Liam Dawson (two) hit the scoreboard with multiple majors, while Aaron Highlands and Ryan Harwood were named the Magpies’ best in defeat.