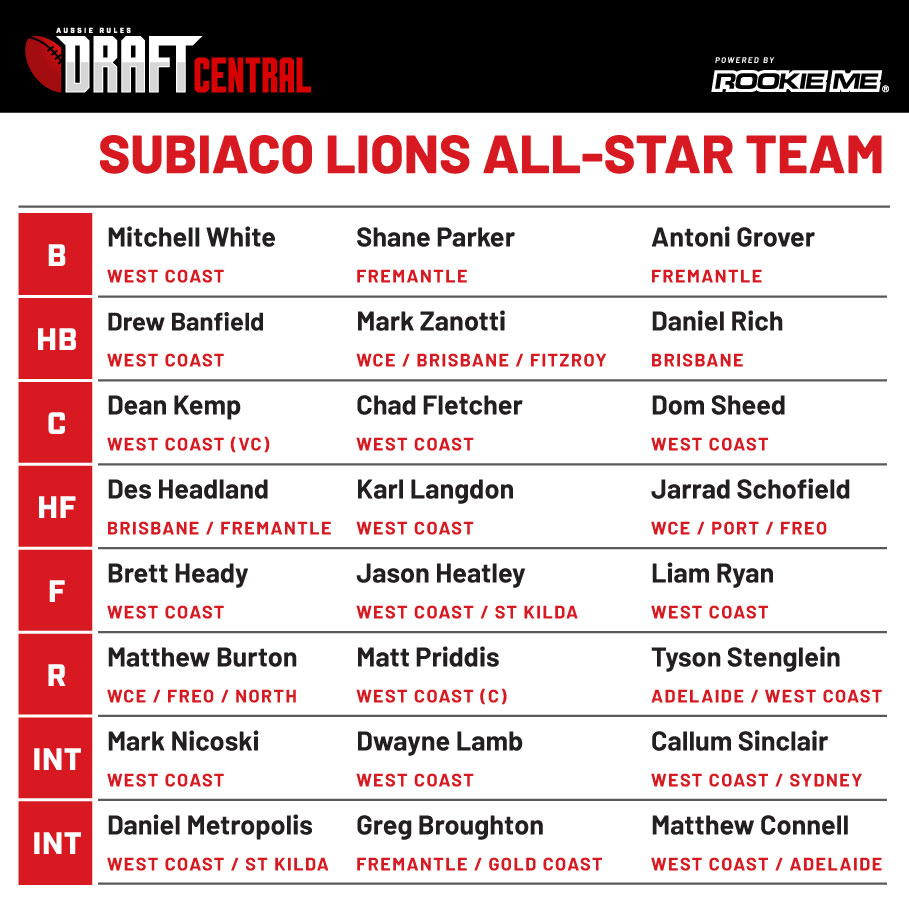 SUBIACO Lions are a side that has a large West Australian contingency with remarkably only one player in the 24-player side not running out for either West Coast or Fremantle at some point during their career. The Lions have been a rich breeding ground for the two West Australian clubs, particularly in the 1990s where a multitude of dual premiership players form a strong line-up for their All-Star Team of the AFL Draft era.

Looking across the team sheet, the midfield immediately jumps out as a strength, but the defence would be stringent and the attack has some versatile options who could create headaches on the day.

The two key position defenders in the Lions side are a couple of players who you could rely on to nullify opposition forwards. Fremantle’s Shane Parker is at full-back and forged a career as a dour defender with 238 games to his name, whilst Mark Zanotti managed the 157 out of full-back as well, but kicked eight more goals (still only 19) than Parker so gets the half-back slot.

At half-back, Drew Banfield and Daniel Rich could provide some serious run and rotate through the middle, with Rich the only player to have not represented West Coast or Fremantle in the side, reaching more than 200 games with the AFL Lions in Brisbane. Banfield is Subiaco’s games record holder at AFL level, notching up 265, winning two flags and a best and fairest. In the back pockets are Mitchell White and Antoni Grover who were very solid players throughout their careers, with White earning an All-Australian honour in 174 games, while Grover reached the 200-game milestone for the Dockers.

The midfield is definitely the strength, and it is helped by the original 210cm giant in Matthew ‘Spider’ Burton who towered over opposition rucks before the modern giants graced the game. The onball division of Matt Priddis, Tyson Stenglein and Chad Fletcher would be a tough one to topple in the contest. Priddis is a Brownlow Medalist, and both he and Fletcher are All-Australians. Stenglein managed 208 games across the Crows and Eagles, winning a flag.

On the wings are Dean Kemp and Dom Sheed, two different eras but just as influential on the big stage. Kemp won a Norm Smith to go with his All-Australian, best and fairest and two flags, whilst Sheed kicked arguably the most clutch goal of the past couple of decades by splitting the sticks against Collingwood in 2018 and handing his team the premiership. With Banfield and Rich able to push up, and the likes of Des Headland and Jarrad Schofield also able to rotate through there, the midfield is flushed for talent.

The forward line has a real mix, with Headland and Schofield the experienced ones in attack, playing 166 and 206 games respectively, having tasted premiership success. Brett Heady reached the 150-game mark in his time with the Eagles, also winning a flag, whilst Flyin’ Liam Ryan won a premiership in 2018 and despite playing less than 40 games at the start of the season, has earned his place in the team.

Rounding out the attack is key talls, Karl Langdon and Jason Heatley who combined for just the 163 games, but booted 278 goals, of which 171 were Heatley’s in just 63 games. The forward line is not as strong as some other All-Star sides, but Subiaco would still be able to kick a winning score against most teams.

The bench has a solid amount of depth with Mark Nicoski, Dwayne Lamb, Daniel Metropolis, Greg Broughton and Matthew Connell all able to fill multiple roles, whilst Callum Sinclair can provide ruck depth to Burton. Of the players to miss out on the 24-man squad, only Michael Symons (Essendon, 109 games) and Daniel Sierakowski (St Kilda and West Coast, 103 games) reached triple-figures at AFL level. Simon White (87 games) and Andrew Donnelly (68) are the other two players to surpass the 50-game mark, whilst Liam Baker (22) is making inroads and already has a flag in what could be a successful career.