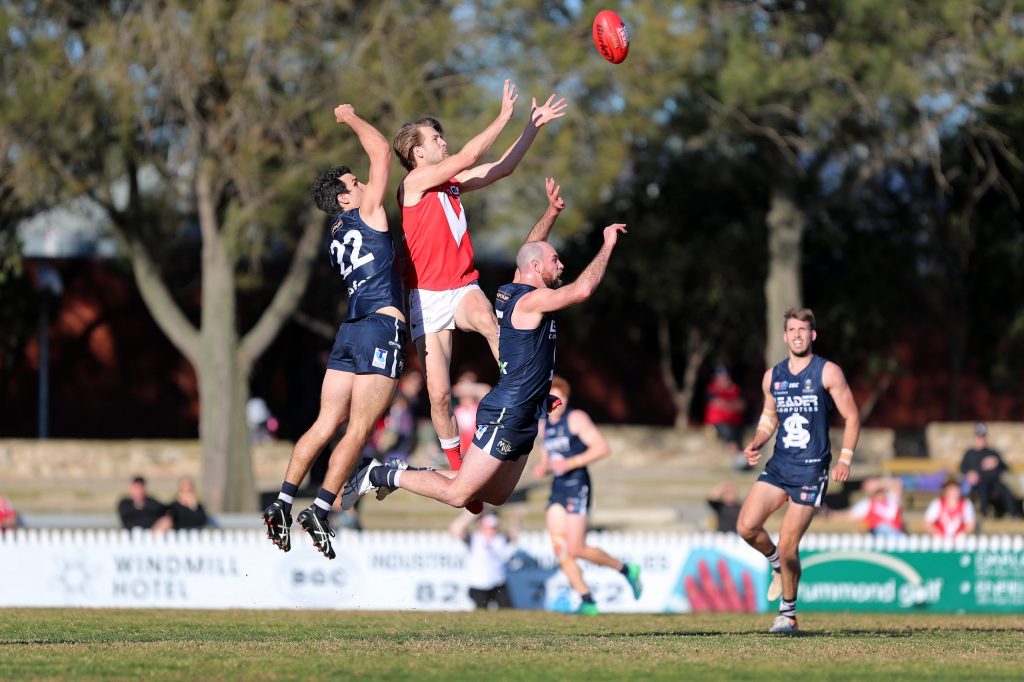 ROUND 6 of the SANFL was an important one for teams at the pointy end of the League standings, with North Adelaide crucially downing South Adelaide to jump the Panthers for second spot. Woodville-West Torrens (WWT) continues to set the pace, having flexed its muscle against the winless Central District. The Eagles also find themselves atop the Reserves ladder, joining Norwood this week as the only two clubs to achieve wins across each grade. We recap the action from all four triple-headers.

WWT’s trio of wins over the Bulldogs counted for a lot in the senior grades, with the Eagles flying ahead atop the League and Reserve ladders. Jack Hayes was the League star this week with 28 disposals, 14 marks, and two goals in a mammoth effort, beaten out only by teammate Joseph Sinor (29 disposals) and Centrals’ James Boyd (31) in the ball winning stakes as a bigman. State Under 18 gun Lachlan Grubb had 11 touches on debut for the Bulldogs.

While a five-goal to nil head start in the opening term was reigned back by the Bulldogs, WWT was in control throughout to come away 30-point winners. The Eagles’ Reserves now stand alone as the sole undefeated side left in the grade, having ended Central District’s five-game winning streak in a one-point thriller. A far more straightforward victory capped off the three-peat at Under 18s level, with the Eagles running out 46-point winners.

Brayden Calvett booted 4.4 from 19 disposals in a big effort for the victors, while the likes of Jase Burgoyne (31 disposals, one goal), Max Lister (25 and two), and Caleb Poulter (25 and one) all hit the scoreboard in big ball winning displays. Henry Smith was also good for two goals from his 13 disposals and seven marks. For Centrals, Shay Linke played somewhat of a lone hand; with his 29 disposals 10 more than the next best Bulldog, and his two majors ensuring he would finish as his side’s lone multiple goalkicker.

Norwood became the second of two clubs to pull off a straight sets weekend, trumping West Adelaide in all three grades – on the road, no less. The Redlegs look to be putting it together at League level, with their 67-point thrashing of the Bloods making for three wins on the trot. A positive weekend was also had for the Reserves as they picked up their first win, while the Under 18s moved into second in extending West Adelaide’s winless run to the tune of 38 points.

Plenty of Redlegs saw a heap of the ball in their League outing, with Richard Douglas (35 disposals) leading a pack of four more teammates to crack the 30-mark, including Mitch Grigg (32 disposals, two goals) and Lewis Johnston (34 disposals, one goal). Johnston and Brad McKenzie combined for 32 marks, while Matthew Panos (27 disposals, four goals) and Ryan Bastinac (29 and two) only extended the list of outstanding individual performers for Norwood.

Kaine Stevens again led the way for Westies with 31 touches, while Murray Waite was dangerous up forward with two majors. The Bloods’ League and Reserves sides remain second-last with one win in each competition, but are firmly planted to the bottom at Under 18s level at 0-6.

Bailey Chamberlain was again a shining light for the Bloods in the junior grade, collecting a game-high 36 disposals, seven marks, seven clearances, five inside 50s, and six rebound 50s in a lone-handed display. Cooper Murley was not far behind for Norwood with 14 clearances from his 34 disposals, while Samuel Duke (four goals), Jackson Murphy (three), and Marcus Roberts (two) were among those to do most of the scoreboard damage.

North Adelaide completed the senior double over its Southern counterpart on Saturday, with the League points most significantly ensuring the Roosters remain level with frontrunners, WWT. After sneaking ahead at half time, North looked to be cruising in the run home, but were made to earn the win after a late surge from the Panthers. Holding firm, the Roosters came out eight-point winners.

Andrew Moore was instrumental in the victory, booting three important goals from his 25 disposals. Harrison Wigg just beat him out with 28 touches, while Lewis Hender (three goals) and Mitchell Harvey (two) were lively inside forward 50. Thomas Highmore was typically stoic in defence for Souths, clunking seven marks among a team-high 26 disposals. Matthew Broadbent wasn’t far behind with 24, and Joel Cross came to life in the second half to finish with 20 disposals and a goal.

The Roosters’ Reserves also came away with the chocolates in their hitout, getting up by 17 points, but South Adelaide got one back in the Under 18s with a 38-point triumph. Both sides sit just outside the top four at Reserves level, while South’s 4-2 Under 18s record sees them placed firmly in the finals race.

Brayden Cook (26 disposals, two goals), Jason Horne (25 and one), and Jamison Snelling (21 and three) were among the many outstanding performers for Souths, finding both the ball and the big sticks. Shaun Bennier booted four goals for North as their only multiple goalkicker, while Matthew Borg and Blayne O’Loughlin had 26 touches apiece, followed closely by Harvey Harrison.

Glenelg’s League flag unveiling spurred the Bays on to a fighting 18-point win over Sturt in Sunday’s lone fixture, helping them improve to 3-3. A plucky Sturt outfit pushed them all the way, but the Tigers were able to hold on as they look to push back into the top four. The Double Blues got the wood over their weekend adversaries in the Reserves and Under 18s though, with the juniors’ 100-point win a particular highlight.

Liam McBean‘s five League goals again spearheaded Glenelg’s effort, as Matthew Snook continued his rich vein of form with 29 a game-high disposals. The usual suspects – James Battersby (28 disposals, 11 clearances), Sam Colquhoun (28 and seven), Abe Davis (26 and six) – all stood up again despite being on the wrong side of the result.

One of the best individual performances again belonged to Tom Powell in the Under 18s, as he dominated for 39 disposals and three goals. Mani Liddy (29 disposals, two goals) also made an impact, while Zabien Parker-Boers booted four goals and Tom Emmett, three. Jayden Davis and Hagan Wright combined to lead Glenelg’s ball winning effort, with the former also adding two goals to his side’s cause.