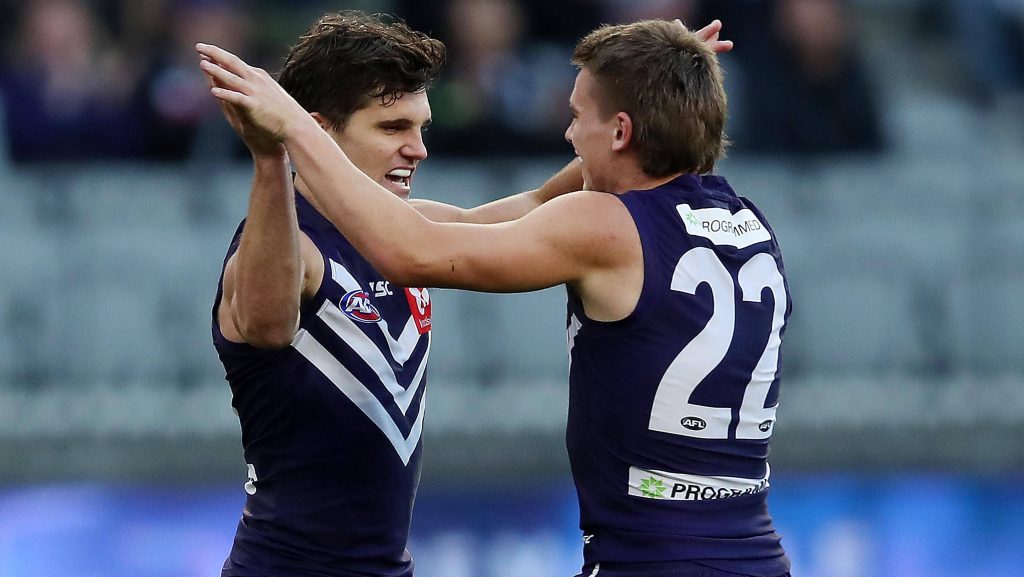 THE NUMBER of recruits from the 2019 AFL Draft to run out for their respective teams on the weekend again spilled into double digits, despite a few youngsters being squeezed out of senior selection. There was plenty to take out of Round 9 for the class of 2019, with a bunch of up-and-comers continuing to stamp their mark on the competition. We take a look at how the best handful of them performed.

Another heart-stopping Fremantle win, and another outstanding performance from Serong. It’s a good thing players aren’t eligible for more than one Rising Star nomination, because the Gippsland Power graduate would have been a lock for consecutive nods. The diminutive midfielder’s work rate again shone through, and he had won the second-most disposals to half time in an influential display.

With a monster nine clearances overall, Serong continues to go from strength-to-strength among the cut and thrust of midfield. He does all the dirty work you expect from a two-way midfielder, but also provides some handy touches moving forward. The 19-year-old was clean in possession and was clever in his use by foot on forward breaks, setting the Dockers on the front foot and only furthering his status as a star in the making.

After Serong got the run-with role against Patrick Dangerfield for Fremantle last week, Budarick was tasked with following GWS star Toby Greene around in Gold Coast’s loss to the GIANTS. He fared well for the short time they were matched up, before Greene hobbled off early with a hamstring complaint. The SUNS Academy graduate proved more than just a defensive outlet, with his attack on the ball and spurts of speed on the rebound propelling his side into attack effectively. Budarick did miss a few kicks on the fly, but showed good intent as his side battled hard to no avail.

Day may have been a touch quieter in comparison to the lofty standard set by his first three AFL outings, but still managed to catch the eye on several occasions as Hawthorn downed Carlton on Friday. His nine uncontested possessions and zero tackles indicate his role is very much that of a defensive outlet, with his assured use of the ball further pertaining to it. Day also continued his marking form with five clunks of the footy, while also sneaking forward early to nab his first senior goal – and a ripper at that on the fly.

The exciting key position forward was very close to taking out star of the round honours, but looks like inevitably claiming that crown down the line after another promising performance. Georgiades is just so commanding in the air, able to take the ball at its highest point and again provide a key target in linking Port’s midfield to its attacking 50. His seven score involvements point towards an enormous impact, and five scoring shots of his own helped double his career goals tally in one outing. Eyebrows may have been raised when Port selected Georgiades with pick 18 last year, and they remain that way after his impressive form.

Mahony is a young player who has benefitted from being afforded an extended run among a rebuilding side, and while he may not yet be setting the world alight, looks to have settled into the Kangaroos’ starting lineup. As a small forward who can advance up the ground and impact at ground level heading towards goal, Mahony is playing his role well. The former Sandringham Dragon managed to snare his first two senior goals in a big win, and should be high on confidence as a result.