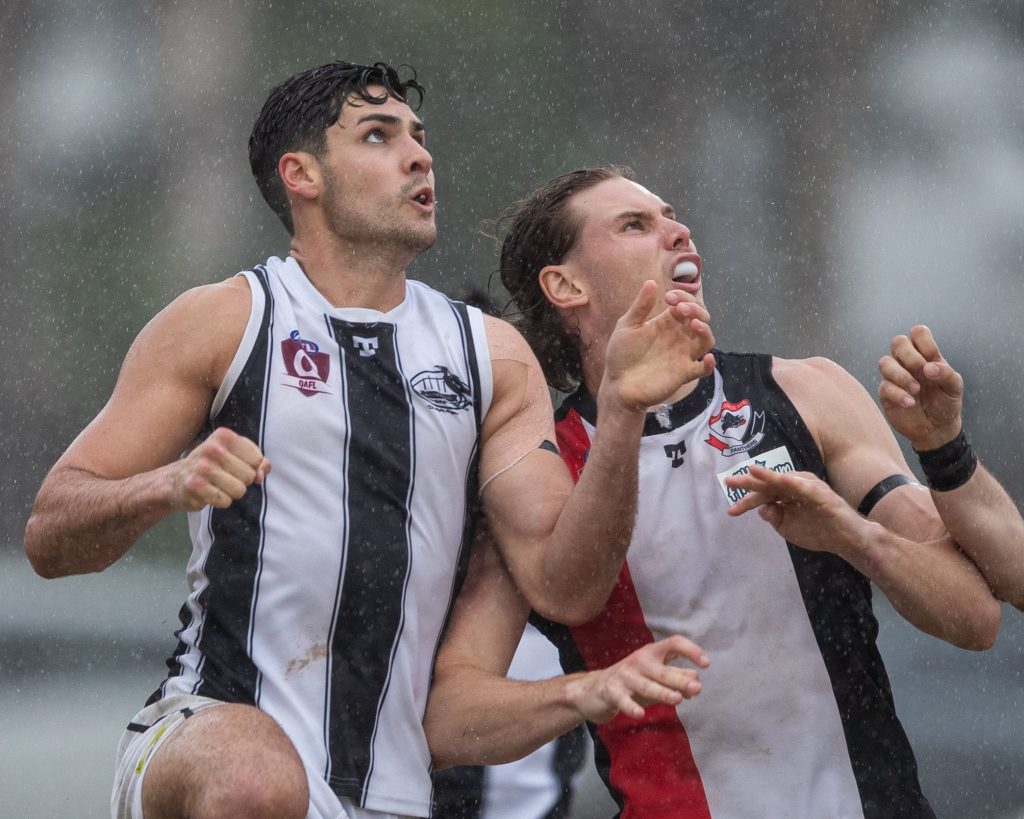 QUEENSLAND football fans will get a good idea of how the Queensland Australian Football League (QAFL) competitors are shaping up after Round 4 of action with a number of ladder-defining clashes in store for spectators. The top six teams face off in respective matches while Wilston Grange searches for its first win against Mt Gravatt, and Labrador has the bye.

The first match of the weekend is the top of the table Palm Beach Currumbin up against a Maroochydore side that will be hungry to bounce back from a disappointing one-point loss to Mt Gravatt last weekend. The Lions are looking every bit like the premiership favourites following their first three rounds, barn-storming to a whopping 204.1 per cent, the second most in the league. Maroochydore won in Round 1 against Wilston Grange, but then suffered a loss at the hands of the Vultures last week after a Round 2 bye.

Mitchell Johnson is right up in contention for leading goalkicker honours, booting 10 majors for the Lions, with Jamison Shea not far behind on six. Shea has been named amongst the best in all three matches so far for last year’s runners-up, while Zac Harrison is another player who has been impressing this season. Over-ager Ashton Crossley has booted three goals in two games, whilst Jarryd Douglas has snagged the five in his three.

For the Roos, Mitchell Scholard has been the dominant target up forward with eight of the team’s 17 majors this season. He and Lachlan Robinson are the two players named in the best on both occasions, whilst the likes of Jesse Malthouse (two goals) and young gun Carter Michael were also ones to watch in the green and gold.

It is hard to look past Palm Beach Currumbin in this clash with so many options up forward, Scholard has been hard to stop this season, so it will be fascinating to see how the Lions combat his goalkicking ways over the weekend.

In what is predicted to be a high-scoring extravaganza, two of the league’s most potent scorers promise to put on a show at McCarthy Homes Oval. Sherwood had the highest score in Round 1 of the competition, while Broadbeach showed the past two weeks what they are capable of, averaging near 100 points per game. Unfortunately for the Magpies, since winning against the Vultures in Round 1, Sherwood has suffered defeats to the top two sides in Palm Beach Currumbin and Morningside. No such troubles have fallen Broadbeach’s way though, with the Cats destroying Mt Gravatt and Labrador in back-to-back weeks. This will be a bigger challenge, making it an entertaining contest.

Liam Dawson is the league’s sharpshooter with the former Brisbane Lions forward slotting 12 goals in three games. He has been hard to contain inside 50, as has Brody Lumber (seven goals). Both have been among the best each week, with Ryan Harwood, William Fletcher and Cade Scott the others, while Claye Beams has snuck forward on occasions to slot four goals so far this season.

In just two matches Jordan Moncrieff has made his mark in Broadbeach’s forward line, snagging 10 goals to lead all-comers from youngster Josh Gore (four). Bailey Reeves and Jed Turner have been amongst the Cats’ best this season, while Matthew Fowler and Ryan Gilmore have also hit the scoreboard multiple times.

Broadbeach are firm favourites in this clash, but the Magpies have shown they can match it with anyone this season and have the league’s leading goalkicker who will make life difficult for the Cats’ defence.

Coming off a bye last round, reigning premiers Surfers Paradise will be refreshed and raring to go for a huge Round 4 clash up against the undefeated Morningside. The Demons were humbled by Palm Beach Currumbin in a grand final rematch back in Round 1, then bounced back in an okay, but far from convincing triumph over Labrador. This game will give fans a good idea of where the Demons are at this season with the Panthers in some great form. Morningside claimed early wins over Labrador and Wilston Grange, then powered away from Sherwood to win well and contain the Magpies to their lowest score of the season. They should be favourites here, but will need to be at their best to snatch victory on the road.

The Panthers share the goals around inside 50 with Matt Hammelmann already averaging more than three a game with 10 in his three matches, well aided by Luke Edwards (seven goals in three matches). The pair have been among the Panthers’ best this season, with Jack Rolls (five goals) and Matthew Payne (one) the two players to earn coaches bests in every game thus far. Young talents, Blake Coleman and Nathan Colenso have kicked three goals apiece for Morningside, while Saxon Crozier has looked good off a wing and is one to keep an eye on for Brisbane Lions fans.

The Demons have one less game to go off this season, but Dale Eames and Tyson Brazel both have four goals to their name. Max Pescud is an Academy talent to watch and has slotted three, while Thompson Smith (two) is the other multiple goalkicker in season 2020. Kain Ford and Matthew Green are the two Demons who have earned places in the team bests in both games.

Morningside have been in ripping form and are favourites, but beware of the reigning premiers who will be keen to take down one of the competition’s best early in the season.

In the final matchup for the QAFL’s fourth round, winless Wilston Grange eyes getting off the bottom of the table against Mt Gravatt, a side that broke its own drought last weekend. The Vultures toppled Maroochydore by a point to get on the board and technically sit equal fourth with a win from three games, though their percentage is far lower than the other teams in the same position, with just 65.02 per cent in season 2020. They will look to build that percentage against a Gorillas outfit yet to win a match, and with the lowest percentage in the competition, kicking just one goal last round against the Lions.

Brisbane Lions Academy youngster Tahj Abberley kicked the sole goal for the Gorillas last week and has been impressive this season, as have the likes of Will McKenzie, Corey Gladdish and Isaac Corvo. In terms of hitting the scoreboard, Sam Gribble (three goals), Josh Baxter (two), Luca Mason (two) and Shatna Cashen-Harris (two) are the other multiple goalkickers.

Mt Gravatt might have got the monkey off the back with the win last round and now they have the Gorillas to contend with to try and go back-to-back. Daine Macdonald has booted four goals this season, one of 14 individual goalkickers in three games, as Jonah Licht (three) and Luke O’Sullivan (three) are others who have been prominent in front of the big sticks. Both have been named among the best on multiple occasions, as has Todd Carbone.

Having finally won in 2020, Mt Gravatt will head in as the form team, though Wilston Grange has played some of the top teams in the competition, so will see this game as a chance to chance its form with a victory in front of home fans.