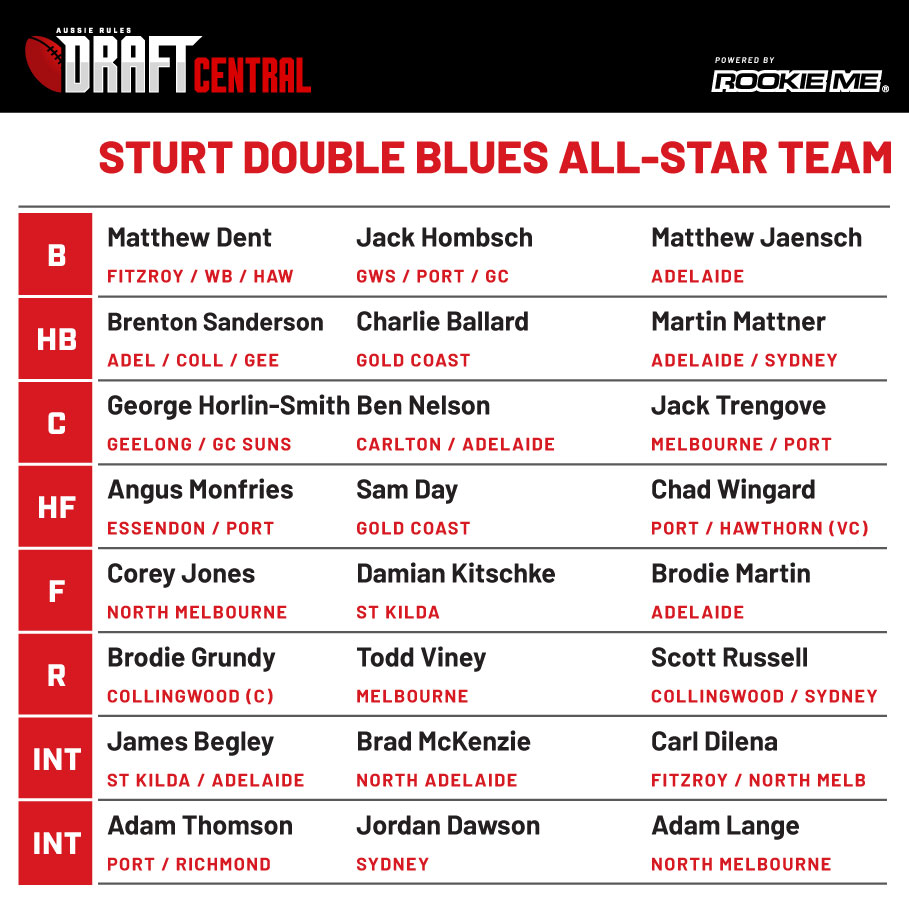 STURT Double Blues have a strong midfield and some exciting players around the ground in the All-Star Team of the AFL Draft era. With an elite ruck and some hard-nosed midfielders, this team would be strong around the stoppages, with firepower up forward.

The Double Blues all-star team is skippered by Brodie Grundy as voted by the public in our All-Star Player of the AFL era in our Instagram polls, storming the field to be the clear standout. The Sturt side features a blend of current-day players, mixed in with a handful of AFL greats, some of whom returned to Peter Motley Oval later in their careers.

The Double Blues backline is anchored by a pair of Gold Coast talls in Jack Hombsch and Charlie Ballard. Drafted to the Giants as an inaugural player, Hombsch later moved back to his native South Australia, where he impressed down back in 89 games with the Power. In the off-season of 2018, Hombsch moved to Queensland where he continues to provide leadership and support to the inexperienced Suns defence. Ballard is capable of playing up forward and on a wing, such is his athleticism and size, however he appears to have found his niche at centre-half-back this season. Matthew Jaensch provided plenty of rebound in his 74 AFL games for the Crows, whilst Matthew Dent was a solid defensive contributor for three Victorian clubs (Fitzroy, Hawthorn and the Western Bulldogs). Brenton Sanderson also earned a place on the Sturt side, having played 209 AFL games – 199 of which came with Geelong. His work as a senior coach at Adelaide and assistant at several other clubs is also worth noting. Martin Mattner is one of Sturt’s favourite sons, having won a SANFL premiership as a player in 2002 and returning as senior coach to lead the club to back-to-back flags in 2016 and ’17. A tough medium-sized defender, Mattner also won a premiership at AFL level with Sydney, after playing 98 games with the Crows.

Collingwood ruckman Grundy and Melbourne legend Todd Viney lead the Double Blues on-ball brigade. Grundy has emerged as one of the most dominant ruckman of the modern era, with his capacity to get involved around the ground essentially deeming him as another midfielder. Having already racked up 139 games, 44 goals, two All-Australian selections and two best and fairest awards, Grundy could well become Sturt’s greatest AFL player by the end of his career. Viney is a household name at the Melbourne Football Club, with Todd starring in 233 games for the club. He also kicked 92 goals, earned two best and fairest awards and was an All-Australian in 1998. Jack Trengove played 86 games with the Demons (and three with Port Adelaide) and was the youngest club captain in VFL/AFL history when appointed in 2012. Scott Russell‘s 198 AFL games meant he was one of the first selected in Sturt’s side. A mainstay of the Collingwood midfield during the 90s, Russell won a premiership with the club in his debut season. Danyle Pearce provides plenty of run and carry on the outside of the midfield along with Double Blues champion Ben Nelson. Pearce played 258 games at AFL level and won the Rising Star award in 2006, whilst Nelson managed a 52-game AFL career but accumulated 205 matches at SANFL level.

Goal-sneaks Chad Wingard and Angus Monfries provide plenty of excitement in the Sturt forward-line. The freakishly talented Wingard has played 167 AFL games and kicked 253 goals. A dual All-Australian, best and fairest and two-time leading goalkicker at Port Adelaide, Wingard moved to Hawthorn ahead of the 2019 season. Monfries booted 248 goals in 211 AFL games – 150 with the Bombers and 60 with Port Adelaide. His miraculous goal in the 2013 showdown will go down in history. Key position utility Sam Day earned selection at centre-half-forward for his 126 games and 90 goals, combining with Damian Kitschke in attack. Former-Crow Brodie Martin provides some speed along with North Melbourne great Corey Jones, who nailed an impressive 216 goals in 157 matches at Arden Street.

Former-Saint and Crow James Begley provides the Double Blues side with some depth, as does Brad McKenzie, who is currently playing across half-back in the SANFL with Norwood. Current North Melbourne CEO Carl Dilena‘s 33 AFL games was enough to see him gain selection on the bench, alongside George Horlin-Smith. Highly-rated junior Adam Thomson and current-Swan Jordan Dawson also found spots.