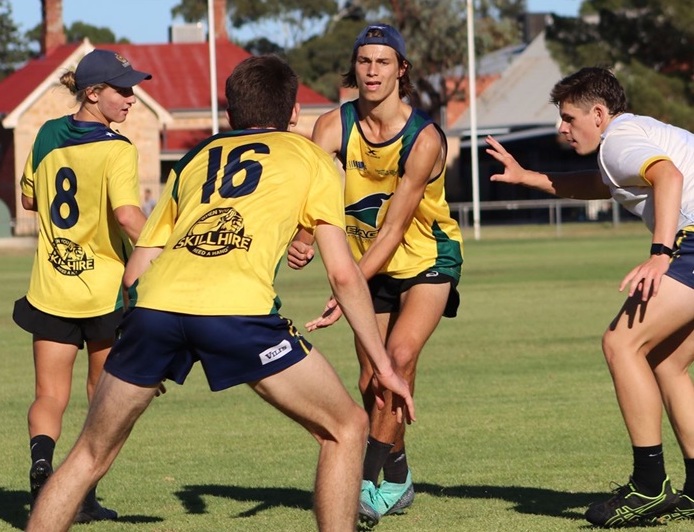 Next under the microscope in our AFL Draft watch is Woodville-West Torrens (WWT) prospect Caleb Poulter, a player who is bolting into first round contention for this year’s draft. The big-bodied midfielder/forward has real hurt factor, able to punish the opposition with his penetrating boot, knack for finding the goals, and tackling pressure. His presence is always noticeable, and strong overhead marks only add to the highlight reels he seems to produce each game.

After five impressive SANFL Under 18s outings thus far, Poulter has become one of the Eagles’ most fancied draft prospects and may well continue to climb the state league ranks. He has really come on as of late, having only represented South Australia’s Under 16 side last year. His form warranted selection in the SANFL Under 17 Futures fixture, and he has shone ever since.

SANFL Under 18s Round 5 vs. Glenelg

Poulter just has such a remarkable presence on the field, and he is impossible to miss when the ball enters his area. Starting in midfield, his clearance work was sound and he got to work with some brilliant handballs out of congestion, showcasing his rare vision. Throughout the game there were bursts through traffic, strong overhead grabs, and some crunching tackles to stop Glenelg’s counter attacks in their tracks.

Despite copping a knock in the third term, Poulter remained involved. He did not quite manage to find the goals, but that was not for a lack of trying – even from distance. His kick penetration is obviously great, but he can sure up his short-range game a touch to prevent simply blazing away.

SANFL Under 18s Round 4 vs. North Adelaide

Poulter has been one of the more prolific Under 18 players after four rounds, but struggled to make his usual impact on this occasion as his magnet was thrown up and down the team whiteboard. He made a quiet start and never quite got going, but looked dangerous early as he burst through congestion and released some typically shrewd handballs.

His kick penetration was still on point, and Poulter managed to contribute some clean touches along the line, but was often blanketed in general play by North Adelaide’s pressure. He had the chance to regain some confidence after earning a holding the ball free kick inside 50, but spurned the set shot wearing only one boot. Having been tried on all three lines, it seems Poulter has the greatest impact as a midfielder who can rotate forward.

SANFL Under 18s Round 3 vs. Norwood

Big-bodied midfielder, Poulter was a shining light for the Eagles in their loss, collecting 29 disposals, eight marks, five tackles and two goals. He was incredibly dangerous when playing up forward, creating havoc both in the air and on the ground. Poulter’s marking ability was on show on Saturday, as he was rarely out-marked and was frequently a go-to option for his side coming out of defence. His disposals can be rushed and wayward at times, but his left-foot kick is terrific whenever he has time to compose himself before delivering to a teammate. A nice goal from 50 in the third term showed that his kick has great range too.

Although he wasn’t quite able to match his outstanding performance last week, Poulter was still arguably his side’s most dangerous player – especially inside 50 where he was a a threat on the lead and at ground level. Poulter again showed some rare abilities for a player of his size with his tackling and clean hands at ground level again impressing. He really hunts the opposition with his tackles and is willing to make repeat efforts, which is nice to see.

His efforts in the air were also impressive as he was always leading up hard and willing to crash packs to get the ball to ground. You can imagine him having even more impact in that area when he puts on more size. Poulter kicked two classy goals in the third quarter, with the first coming from a brilliant pick-up on the run at his feet and then kicking a lovely snap goal. The second was also a snap goal with little time to think about it, showing his natural talent. Poulter finished the game with 16 disposals, seven tackles, five marks, and kicked 3.1 in another great performance.

SANFL Under 18s Round 1 vs. South Adelaide

It was a huge game from the talented tall midfielder, who would have certainly gotten recruiters’ attention with a commanding game playing through midfield and up forward. Poulter won plenty of the ball but it was his disposal that really stood out, with his long and accurate kicks hitting targets inside 50 and his long handballs with great vision also catching the eye.

Poulter showed great agility and clean hands at ground level which was impressive for a 190cm-plus player, but even with his attacking side coming to the fold it was also his defensive game which stood out as he was always prepared to tackle despite looking gassed late in the game, but you couldn’t fault that. Poulter finished the game with 34 disposals, seven clearances, seven marks, 10 tackles, and a goal to be the standout player not just for this game, but for the whole round in general.