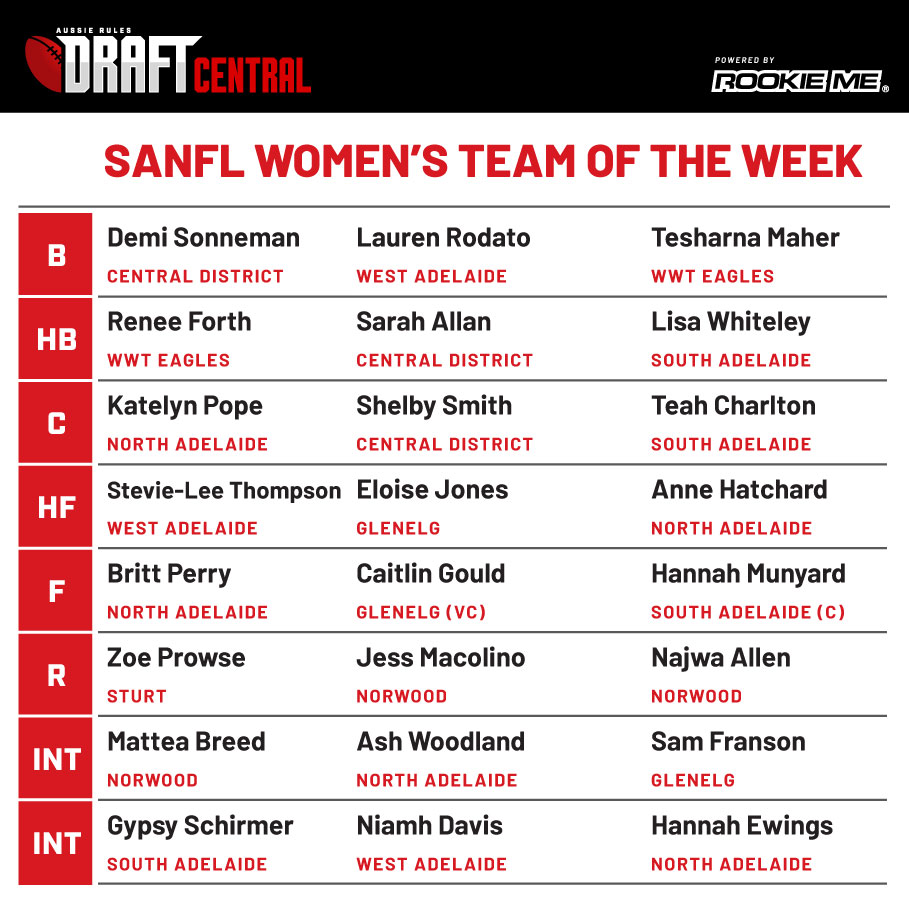 WITH a couple of wins to secure the top two spots in the South Australian National Football League (SANFL) Women’s, North Adelaide and South Adelaide combined for nine players in our Team of the Week for Round 9. Fellow weekend winners, West Adelaide and Glenelg both recorded three players, as did impressive losing sides, Norwood and Central District. Woodville West Torrens Eagles (two players) and Sturt (one) rounded out our 24-player squad.

The now-official minor premiers, North Adelaide had five players in the Team of the Week, matching their Round 8 effort last week. From the players making the team in both weeks, midfielders Anne Hatchard and Katelyn Pope both hit the scoreboard with a couple of majors, while Hannah Ewings kicked one and also made the side. The two inclusions for the Roosters were another forward in Britt Perry, and Ash Woodland who also joined in North Adelaide’s massive 82-point win over Sturt. The sole Double Blues player making the side yet again was ruck Zoe Prowse who dominated around the ground in a losing effort.

South Adelaide recorded the four players in the Team of the Week, covering all thirds of the ground. In defence, Lisa Whiteley slotted in to half-back, with young gun Teah Charlton on the wing, and Western Bulldogs’ AFL Women’s representative Hannah Munyard making the pocket after some impressive work inside 50 and earning the captain nod this week as the player who made the biggest difference. Gypsy Schirmer is the fourth Panther in the team, making the bench for the first time. Their opponents on the day were Central District which held up fairly well despite the final margin. Sarah Allan makes the team once again at centre half-back, with Demi Sonneman joining her in the back six, and midfielder Shelby Smith starring in midfield.

Cailtin Gould earned the vice-captaincy this week after an enormous week up forward with three goals and looking dangerous rotating between the ruck and full-forward. She joins fellow tall Eloise Jones inside 50 in our team, with Sam Franson also making the side on the bench. The fourth winner for the weekend was Norwood, as a strong midfield effort from Jess Macolino and Najwa Allen saw the pair make the team once again, while Mattea Breed continued her form with another impressive performance.

West Adelaide had a narrow loss against the Redlegs but still had a number of impressive performers including key defenders, Lauren Rodato and Niamh Davis. The pair will rotate off that last line, while Stevie-Lee Thompson was almost a match winner for the Bloods throughout the four quarters. Rounding out the 24-player team is a couple of Eagles in defender Tesharna Maher and utility Renee Forth both in the team.

DRAFT CENTRAL SANFL WOMEN’S TEAM OF THE WEEK: ROUND 9