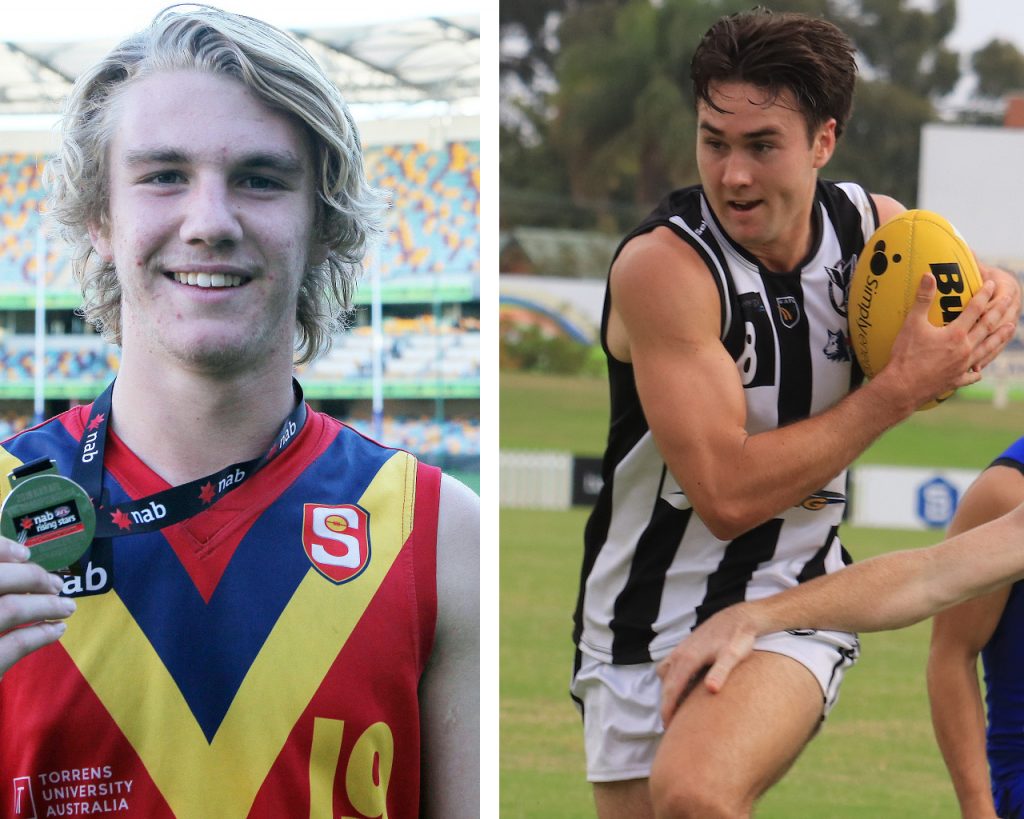 THE TOP junior prospects from South Australia and Western Australia continue to shine, with a number of standouts emerging in Round 5 of the SANFL Under 18s, and Round 2 of the WAFL Colts. In continuing with our expanded Caught the Eye series, we have compiled a list of the best and most promising performers from across the weekend, with a representative from all eight SANFL clubs, and one each from the two sides involved in our featured WAFL fixture. For extended profiles on each AFL Academy member listed, click on their names highlighted in red.

Our scouts said: “Powell was again excellent in the engine room for Sturt. In the first half, when the game was largely fought in close quarters, Powell won plenty of contested ball and used his lightning-fast hands to get things moving for the Double Blues. However, when the game opened up after the main break, Powell was able to accumulate the ball on the outside at will.”– Tom Wyman

Verdict: The Double Blues standout is becoming hard to ignore in terms of top 25 calculations, making him a real benefactor of simply being able to get out on the park in 2020. Another 40 touches has him well clear atop the SANFL Under 18s disposal charts, with his knack for extracting big numbers now more than just a good habit. Powell is as consistent as anyone in the draft pool at the moment, though he can work on making a more profound and regular impact via foot to round off his game and ensure each disposal hurts the opposition. His handballing is elite, nonetheless.

Our scouts said: “It was yet another terrific outing for (the) talented bottom-ager… His speed, ability to hit the scoreboard, efficiency by hand and foot, and line-breaking carry make for a nice array of strengths, and all were on-show throughout the clash.” – Tom Wyman

Verdict: He may not have been Norwood’s highest ball winner this time, but the lightly-built midfielder/forward is the Redlegs’ most damaging prospect. It’s easy to forget that he is a bottom-ager too, with at least another year in the Under 18s system to come. Like a couple of others on this list, Murley’s ability to find both the ball and the goals makes him a dual threat, and he is a player who can carve up the opposition with real pace and dare. His kicking on the end of it sharp too, and becoming more consistent with experience.

Our scouts said: “There were periods in the third term where Willis looked like tearing the game apart. The dynamic midfielder showed he can do it all in his on-ball role; accumulating around the ground early, winning his own ball, bursting away with strength, and adding deft agile movement in congestion.” – Michael Alvaro

Verdict: Willis was one of a few North Adelaide bottom-agers to thrive in the absence of State Under 18 Academy members Jamison Murphy and Tariek Newchurch. Given some added responsibility through midfield, Willis was able to use his speed to wheel and go at every opportunity, while also exploding from congestion with an interchangeable combination of strength and agility. He worked hard for his disposals and even showed willingness going the other way with a desperate lunging tackle to catch his opponent cold. Could be one to keep an eye on for next year.

Our scouts said: “Alleer has been tried in a few different roles this season, and found his spot on a wing in this particular outing… His strong verticals allowed him to get a hand in and intercept balls he had no right to, while a couple of highlight reel overhead marks also caught the eye.” – Michael Alvaro

Verdict: Alleer has been terrific in patches thus far, with little glimpses of rare athleticism coming to the fore across his four Under 18s outings. He looms as a modern day kind of prospect as a 196cm wingman. but while his size screams readymade, his game is still quite raw. The 18-year-old has the potential to dominate down the line and has also shown good signs as a key forward. It’s his vertical leap and ability to take the ball at its highest point which catches the eye most significantly, as proven by a couple of screamer overhead marks on the weekend.

Our scouts said: “Another bottom-age Eagles prospect to have stood out is Neumann… His second efforts were a feature early as he hunted the ball, able to smother and aggressively bump his opponents off the ball to cause chaos inside 50.” – Michael Alvaro

Verdict: Neumann was deemed by the Eagles to have been their best player on the weekend, and it is easy to see why given the endeavour he showed. In just his second game of Under 18s football, the forward showed terrific strength and courage at the contest; able to win his own ball, take strong marks, and perhaps most crucially, hit the scoreboard. His impact was profound among a highly talented Eagles side, making for a solid platform to build upon.

Our scouts said: “Wanganeen is a player who makes things happen, having an impact with every possession. He contributed a few nice touches early as he kicked into gear with his smooth movement, and his use by foot going forward proved damaging.” – Michael Alvaro

Verdict: While it was a tough day for the Tigers with a heap of star names out of the side, it only allowed players like Wanganeen to shine even brighter. Having played most of his footy out on a wing thus far, the smooth moving bottom-ager got around the ground well and proved a key threat going forward. While he may scupper a kick here or there and not be the most consistent of players out there, Wanganeen has the ability to pop up with flashes of brilliance. He really looks the part with his speed and agility, and has time now to refine his game heading into his all-important draft year.

Our scouts said: “Horne continued his outstanding start to the season with another best on ground performance against the Bloods. It was his first game without partner-in-crime Matty Roberts for the season, and Horne put on an absolute show in his absence. He kicked three goals, including a goal of the year contender in the third quarter when he picked up the ball cleanly outside 50, took three bounces, sold candy to three different opponents, and then finished with a goal from 40 metres out.” – Tom Cheesman

Verdict: Horne put in one of the performances of the season for South Adelaide, only further pushing his case to be the number one prospect for next year’s draft. Last year’s State Under 16 MVP has very few weaknesses, but his strengths present in bucketloads. He is a natural leader who kicks well, can mark overhead, win his own ball, and find the goals. Get used to seeing his third term goal in highlight reels going forward, and expect Horne to take the reigns as the Panthers’ prime mover with some of his fellow midfield stars shifting in and out of the side.

Our scouts said: “Couroupis was outstanding for the Bloods, arguably their best performer on the day. The midfielder was aggressive at the ball and at his opponents throughout the game, and his marking ability was definitely a highlight.” – Tom Cheesman

Verdict: It was somewhat of a breakout performance for Couroupis, and his lift in output could be a timely one for the struggling Bloods midfield. Having also turned out for the Henley Sports Academy during the week, the Year 12 student should have his hands full with plenty more opportunities to impress. Midfielders with points of difference are always important, and Couroupis’ ability to mark overhead was good to see. It should put him in good stead for a more consistent output.

Our scouts said: “The Denmark-Walpole product showed why he is considered to be one of the leading ruck prospects from Western Australia this season with a strong performance against Swan Districts. He finished with 16 possessions, 29 hit-outs, four marks and three inside 50s. For a ruckman, he covered the ground well, often positioning himself just behind the play to halt any attacking momentum the Swans had.” – Lenny Fogliani

Verdict: In a draft pool which boast a few promising key position prospects at the top end, Lane looms as a real chance to break into contention amid just his second season of Colts football. He is far from a mere beanpole ruck at 202cm, with the over-ager’s solid frame allowing him to make a seamless transition to the next level of competition in Western Australia. Lane’s athletic base also allows him to move around the ground well and have a real presence at each level of the contest, so he could be one to watch with a few more eye-catching outings like this.

Our scouts said: “The Hills Rangers junior showed why he is one of the leading inside midfield prospects in this year’s AFL draft pool. He accumulated 31 possessions, laid five tackles, grabbed three marks and recorded three inside 50s in a powerful display. His composure, and decision-making around the stoppages was impressive for someone his age. When he got the ball on the outside, he constantly hit his intended target.” – Lenny Fogliani

Verdict: Trew showed his class once again on the weekend with another outstanding performance for the struggling Swans side. He had no trouble finding the ball with an equal team-high in disposals, and continues to prove he is one of the finest exponents of the handball in this year’s draft crop. While he is a touch handball happy, Trew also kicks well and could benefit from using that weapon a touch more, though who are we to tell him to do any different. His form has been terrific, and he is a real difference maker, right in the first round mix as it stands.