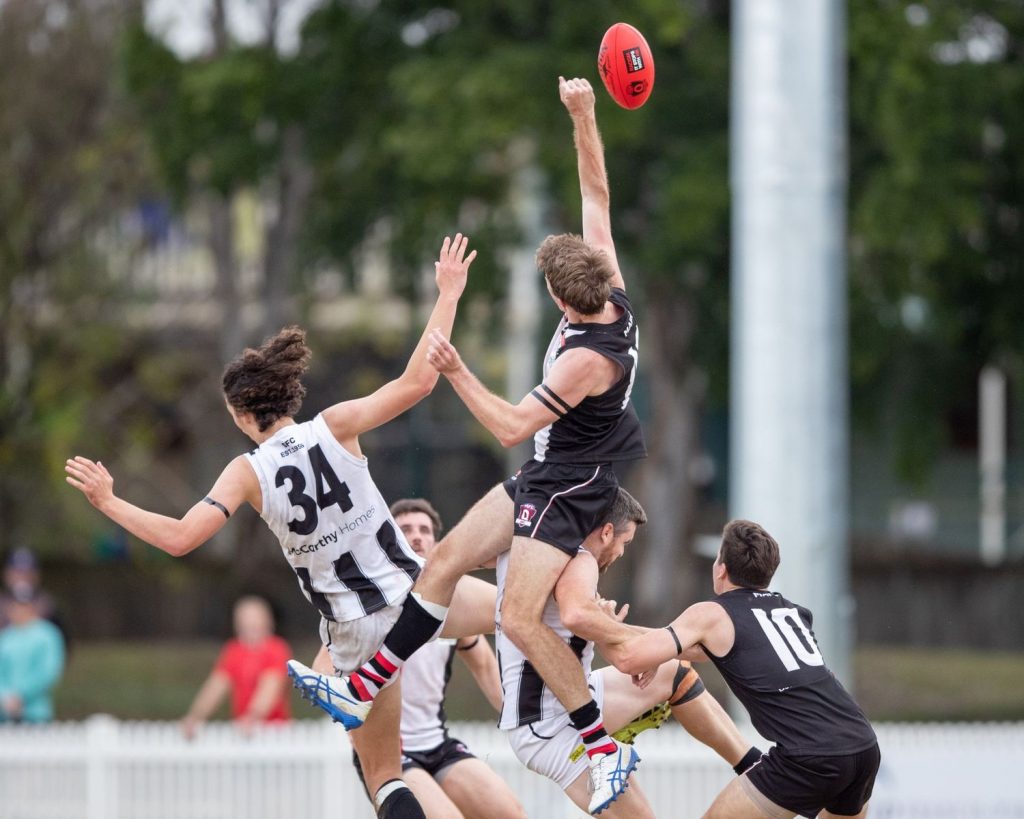 MT GRAVATT has finally broken through for a victory after a tough couple of weeks in the Queensland Australian Football League (QAFL) competition in Round 3, downing Maroochydore by a solitary point. The Vultures joined the top three sides – Palm Beach Currumbin, Broadbeach and Morningside – all booting at least 12 goals in comfortable wins over their respective opposition.

The Vultures and Roos had a nail-biting topsy-turvy contest throughout the match, with the Roost leading by two points at the first break showing they were up for the fight despite having the bye the previous round. Mt Gravatt hit the front by half-time, mostly due to having more scoring shots, holding a 4.8 to 4.5 advantage. The inaccuracy looked like it might pose an issue for the Vultures who had 20 scoring shots to 15 by the final break, but held just a 10-point lead.

The final quarter was an exciting one as Mitchell Scholard looked to have won the game for his side with back-to-back goals in a minute for Maroochydore to hit the front, but Jonah Licht came to the rescue for the Vultures with his straight kick allowing Mt Gravatt to celebrate with a remarkable 8.14 (62) to 8.13 (61) win. Scholard finished the game with five majors in a losing side, while Ben Cadzow and Jai Larkins named among the best. Harry Milford (two) was the only major goalkicker for the Vultures as they had seven individual goalkickers in a shared load. Todd Carbone, Luke O’Sullivan and teenager Thomas Matthews were named among the top players in the victory.

Broadbeach continued its barn-storming start to the 2020 QAFL season with a 10-goal thumping of Labrador. The Cats led by six points at the first break but put the pedal to the metal after that, piling on 11 goals to three in the final three quarters to run away with a 13.16 (94) to 4.8 (32) victory. Jordan Moncrieff reached double-figures for his goalkicking this season with another four majors to go toward his total of 10, while Ryan Gilmore (three) and Josh Gore (two) were productive in the victory, Rhys Clark, Sam Cunnington and Bradley Lowe were among the top players, as was Max Lower (one goal). The Tigers had five individual goalkickers in the win with the best players on the day being Jayden Young, Fraser Thurlow and Matthew Lee.

A hungry Palm Beach Currumbin outfit maintained its superb start to the season by restricting Wilston Grange to just one goal in a 75-point thumping of its own. After booting six goals to one in the opening half, the Lions poured on seven unanswered goals in the second half to run away with the win, 13.7 (85) to 1.4 (10). Mitchell Johnson joined Moncrief on 10 majors for the season with another four goals to be named among the best, with Jamison Shea (three) nominated as best on ground. Tyler Cornish and Thomas Thynne were also impressive in the win, while Liam O’Brien and Jarryd Douglas both kicked multiple goals. Young gun Tahj Abberley was a shining light in a dark day for the Gorillas, booting the sole second quarter goal and named among the best, while Mitchell Crawley and Andrew Boston were others who stood out in defeat.

In the other match, Morningside piled on a whopping 7.13 to 2.3 in the second half to come from behind and deliver Sherwood back-to-back defeats, whilst remaining undefeated themselves in a 33-point victory. The Panthers should have won by more with the 12.22 (94) to 9.7 (61) inaccuracy helping the Magpies from a bigger defeat, given the 18 extra scoring shots to the home side. Luke Edwards was best on ground for the Panthers with four goals to his name, as Matt Hamelmann and Jack Rolls (two apiece) were also amongst the best for being able to find the big sticks. Matthew Payne was another who stood out, while overager Nathan Colenso has been touted as one to watch from a Gold Coast Suns Academy perspective and he kicked another goal to make it three from three games this season. For the Magpies, Liam Dawson hit the scoreboard again with a couple of majors, while Rhys Harwood and William Fletcher were impressive for the black and whites.