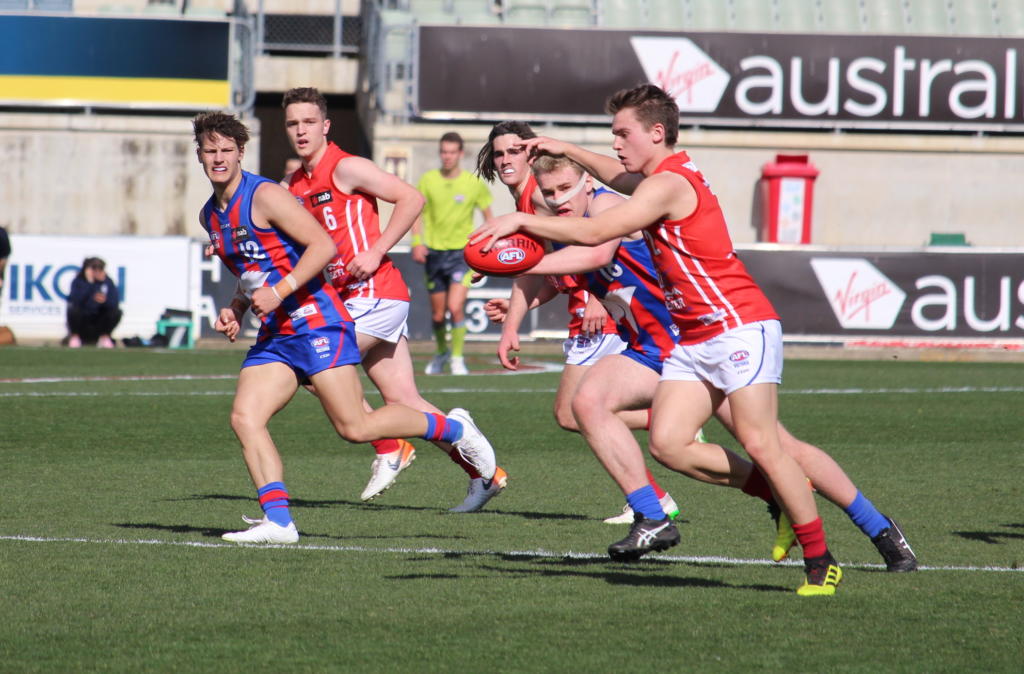 18 RECRUITS from the 2019 AFL National Draft ran out for their respective teams on the weekend, with many of them enjoying their moments in the sun. There was plenty to take out of Round 8 for the class of 2019, as a bunch of talented youngsters retained their spots at the elite level and are continuing to stamp their mark on the competition. We take a look at how the best handful of them performed.

A few weeks back we saw Geelong superstar Patrick Dangerfield enter training to the backdrop of Kenny Loggins’ 1986 tune, Danger Zone. Clearly unawed, Caleb Serong showed on Monday that he does not care for such pomposity, nor wilt to the challenge of shutting out one of the game’s elites. The heart-and-soul midfielder was superb amid horrendous conditions, tasked with following the 2016 Brownlow Medalist, and keeping him to 18 disposals. While he competed with the Cats champ both physically and in the air, Serong also found 22 touches of his own and thrived on the tough stuff to lay seven tackles. To cap off a breakout display, the Gippsland Power graduate slotted home a pin-point goal on his left side to drag Fremantle past what would have been a record low score. He will undoubtedly be in line for a Rising Star nomination this week, and it is no wonder Dockers fans have quickly warmed to him.

You would have already seen the cliched Cahill comparison after Essendon’s Ned soccered home his first league goal on the weekend, and the youngster’s two second half snags proved vital in the Bombers’ narrow win over Adelaide. The small forward’s stats may not flatter, but the energy he brings to what has previously been a stagnant Essendon lineup is noticeable. Cahill played his role to a tee in his second outing, popping up to hit the scoreboard and looking lively deep inside attacking 50.

The mature-age recruit was another small forward to have posed plenty of threats on the weekend, and joined the first goal club in Geelong’s rain-effected win over Fremantle. Despite the conditions, Close was able to find space inside attacking 50 and got his debut off to the perfect start with a well hit set shot conversion. The Glenelg product was one of the Cats’ most menacing forward options, constantly getting to the drop of the ball and getting involved in his side’s attacking forays. Add four tackles to the mix, and it was a pretty well-rounded maiden outing in the long-sleeved number 45 jumper.

It was another lacklustre performance from the Hawks overall, but Day continues to show glimpses of his enormous upside nonetheless. Stationed in the defensive half for most of the match, Day seemed to read the play well and chimed in with some important intercept possessions. His marking overhead was sound, and he also provided a safe outlet under pressure on the rebound. While some turnovers (four) crept into his game in the face of the Swans’ ground level pressure, Day has already shown he is a capable user by foot. He seems a safe bet to remain in the Hawthorn lineup as the kids start to get an extended run.

Back in the side in a big way, Georgiades continues to justify the faith shown in him after Port Adelaide used a first round pick to secure his services. The West Australian only stands at 192cm, but makes up the difference with a terrific vertical leap and pace on the lead. His hands were strong upon presentation on the weekend, clunking two contested marks as he provided a key link into attacking 50 for the Power. While his ability to create and get involved in attacking passages made him a solid part of his side’s structure, Georgiades crucially got on the board himself with a goal in the second term.