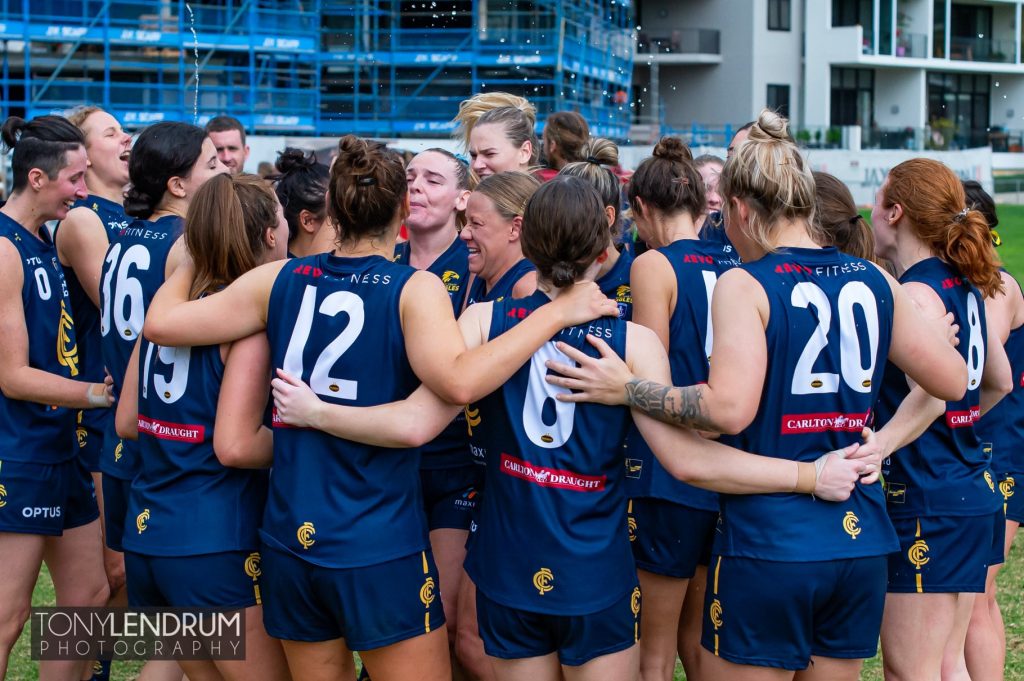 CLAREMONT Tigers have enjoyed their first ever win over Swan Districts in the West Australian Football League (WAFL) Women’s competition, triumphing by 21 points in a highly entertaining contest to claim the Dhara Kerr Cup. The win meant the Tigers are one of four sides who have recorded a win and a loss from the opening two rounds with their Round 1 conquerors Subiaco the sole undefeated side, and newbies South Fremantle the only side yet to taste victory.

Swan Districts kicked the opening goal through young gun Mikayla Morrison, but it would not be long before the new-look Claremont forward line began to click. Brooke Whyte often found the going tough last year as the main target, but was relieved to find the likes of Julia Uhe and Amy Franklin inside 50 with her. That duo kicked two apiece in the opening half, with Brooke Hongell kicking a fifth team goal for the Tigers to have piled on five unanswered majors – from 10 scoring shots – to head into half-time with a 29-point advantage.

Claremont coach Andrew Di Loreto said whilst his side started slow, he was proud of how they quickly gelled and were able to swing the momentum in their own favour.

“I think the Swans seemed to settle quicker than us and they put their heads over the ball and just wanted it more in the first five to 10 minutes of the game,” he said. “That resulted in them getting the first score and then I think the girls started to wrestle back a bit of the momentum and started to give us first crack at the footy and allowed us to work our way back into the game and maybe take control for the next little bit.

“It was disappointing not to start in the fashion that we maybe got to, the 10 or 15 minutes into the first quarter. “But it’s nice to see the maturity of our group to arrest back momentum after that fast start from Swans.”

Swan Districts started strongly again early in the second half, and with work of teenage talents, Tara Stribley and Brianna Hyde busy, it was Mikayla Hyde who pushed hard forward and intercepted a ball just inside her forward 50. She went for a short run and drilled the goal without a problem to put her side back within 23 points. Claremont refused to let the visitors build any momentum though, with Amanda Robertson immediately replying with an over-the-back goal moments later.

It happened again when Swan Districts’ defender-turned-forward Fi Boucher outbodied her opponent at the top of the goalsquare earning a free and kicked truly. Once more Robertson stepped up and kicked an almost immediate reply from a great passage of team play. Jess Low had been prominent at half-forward and she spotted up Whyte on the lead. Quickly moving it on sensing the forward was out of range, she popped it up to the middle-ager in Franklin, and despite the good defensive work to spoil from the Swan Districts defenders, it came off hands and Robertson played the role of crumber perfectly to again answer with an over-the-back goal. For all of the Swans’ great work, Claremont had won the quarter by a couple of points and now led by 31 at the final change.

Di Loreto said the side knew how important momentum was through the game given the youth of the opposition and the confidence a roll-on would bring. He was particularly proud of how Robertson stood up and led from the front in regaining the momentum for her side.

“Swans are a really talented young side,” Di Loreto said. “Even though they may not have a lot of their AFLW talent available to them at the moment. They’ve got a lot of state representatives and up and coming talent so we knew that if we didn’t really try and win that armwrestle and reply as soon as they were able to probably score or gain some momentum, that a young talented side like they are, they could really get their tails up.

“Amanda Robertson is a veteran of our club and of the league and I thought she played outstanding and took it upon herself to do the couple of team things here and there and then was rewarded with a quick couple of goals as well.”

Swan Districts knew it had to be perfect in the last term to come from behind and take an unlikely win, but unfortunately for the visitors, they missed some early chances. Stribley, the Hydes and Morrison were all fiercely attacking to try and get a goal on the board, but could only muster a pair of behinds. In what was a dagger to the heart of the black and whites supporters, Claremont went end-to-end and a brilliantly placed kick by Jacinta Valentini got it to Uhe who worked her opponent under the ball, stayed on her feet and had a paddock of space to run into an open goal and seal the game.

It would be Claremont’s only score of the quarter in a 20-minute purple patch for the Swans, but despite a couple of late goals to Morrison and Shanae Davison, it would not be enough. Furthermore, the Swans had a few more chances to really cut the final deficit back, including a chance from Davison who did her best impression of Liam Ryan‘s effort at Optus Stadium around the same time by flying high to take a clean mark from five deep, however she missed the set shot no doubt trying to get her breath back.

The final result saw Claremont win 8.8 (56) to Swan Districts’ 5.5 (35). The Tigers’ forwards in Uhe, Robertson and Franklin were all really impressive, while Ella Smith continued to crack in through midfield, Valentini looked dangerous and Low was a good link in transition. For the swans, both Hyde sisters caused havoc with their ball movement and vision going forward, Morrison was strong with her kick placement, and Stribley showed off jets that her opponents could not match on a number of occasions. Nyra Anderson and Bianca Webb also showed some great signs through the middle of the ground, but it would not be enough.

Di Loreto said he was impressed with a number of Tigers who really stood up throughout the match.

“Jess Low played her first minutes in the midfield yesterday, she’s an outstanding young talent,” he said. “She played a little bit of half-back and wing previously. “We needed another onball rotation so we challenged her to have a crack at that this week and we thought she was great playing her role, her tackling pressure was brilliant and she was able to break lines. “She has quite a turn of speed and was able to break lines.

“I thought that our captain Ella Smith was good again, she was good again, good at getting first hands on it. “I thought our back five all day was pretty solid, probably led by Brooke Hongell. “I was pretty happy with the consistent effort across the board. “The girls are really embracing whatever roles the staff are giving them and I’m a pretty happy coach at the moment.”

The AFL Women’s Academy member is featured in our Central Insight magazine as one of the Top 20 players to watch this season, and it is easy to see why. One of Western Australia’s top AFL Women’s Draft hopes, Morrison has a lot of superb traits with her speed, athleticism, defensive pressure and elite kicking making her such a damaging prospect. She showed how damaging she can be in the forward half for the Swans, kicking the first goal of the game, and then setting up her teammates with kicks to dangerous areas which allowed her teammates to win one-on-one battles or get over the back for easy goals. Morrison is from the East Perth region, and with no Royals side in the League competition, Morrison runs around with Swan Districts.

In the other two results, Peel Thunder held South Fremantle scoreless during a 64-point win over the Bulldogs to pick up their first win of the season, while Subiaco showed it could be a real contender by shocking reigning premiers East Fremantle by 21 points, holding the Sharks to just 1.2 during the match at New Choice Homes Park. The results meant that Subiaco sits on top with two wins from as many games, South Fremantle on the bottom and still looking for its first score, and the four other sides on an even keel of one win, one loss from season 2020.

In the Peel Thunder thumping over South Fremantle, Demi Okely snagged three goals, with Jade Briggs and Kira Phillips kicking a major apiece. Only four behinds – all to Subiaco – were scored in the second half between the Lions and Sharks in a tight tussle, with both defences holding up strongly. Subiaco had four individual goalkickers in Charlie Thomas, Ellie Blackmore, Taylisha Brown and Philippa Pienaar, while Katrina Tinson was the sole goalkicker from the Sharks.