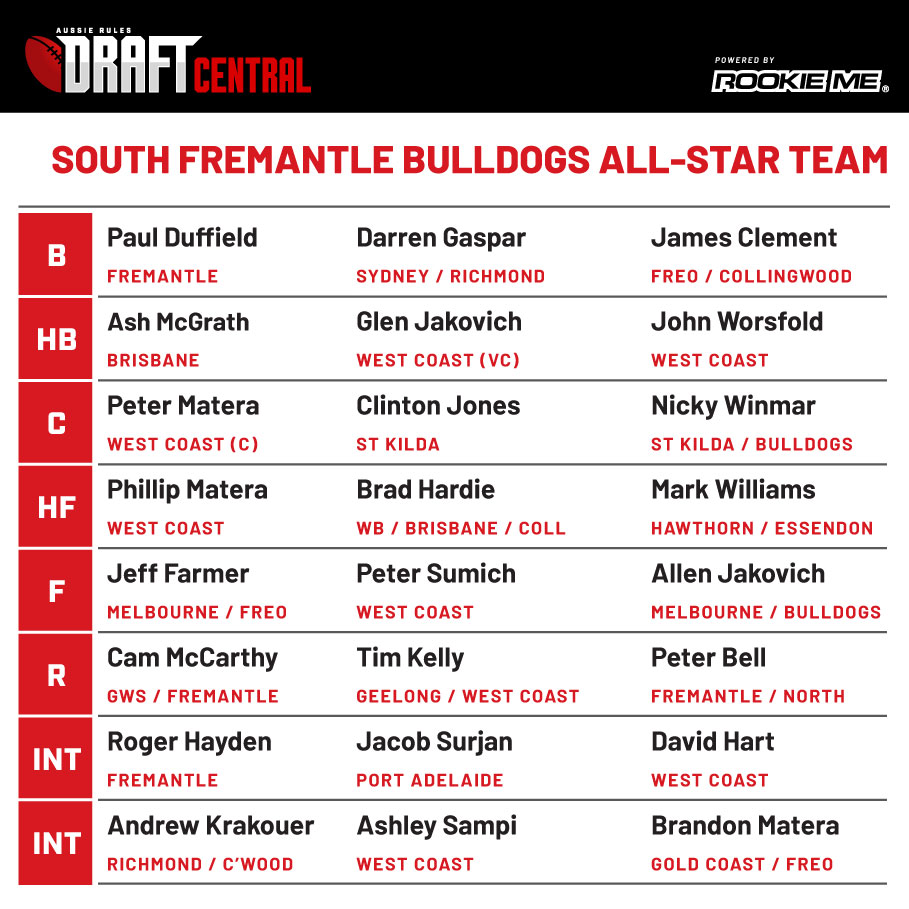 SOUTH Fremantle would be an exciting team to watch if the Bulldogs’ All-Star side of the AFL Draft era ever had played together. They have a terrific balance of speed, strength and X-factor, making them arguably the second best West Australian footy factory in this series behind East Fremantle.

The team has plenty of speed throughout the side, but also accountability in defence, with some All-Australian key defenders, some superb key position forwards and a raft of medium and small players around the ground. The team could do with an extra inside midfielder and ruck, but as a whole, there are not too many deficiencies in the overall makeup of the side.

Starting in the key position posts, South Fremantle is anchored down by Darren Gasper and Glen Jakovich. Gasper played 228 games and was All-Australian twice, as well as won a best and fairest with the Tigers. Jakovich was one of the best key position defenders of the modern era, winning a massive four best and fairests at the Eagles, as well as two All-Australian nods to go with his two flags. He is alongside teammate John Worsfold who also played in those two premierships, and won a best and fairest along the way too.

On the other half-back flank is Brisbane’s Ash McGrath who might be best known for his kick to seal the ‘Miracle on Grass’ win for the Lions over Geelong, but he still carved out a really solid 214-game AFL career. In the back pockets are Docker-turned-Magpie James Clement who became a saviour for Pies fans, earning All-Australian honours twice, the same number as best and fairests he won in the black and white. In the other back pocket is Paul Duffield who was an honest soldier, difficult to beat on his day and playing 171 games. Roger Hayden and Jacob Surjan are a couple of more recent players who could role through the defensive half, as could David Hart, and all three are on the bench.

The midfield has serious talent, but might lack a touch of inside grunt. Peter Bell is a star who played almost 300 games, won four best and fairests, two All-Australians and a couple of premiership with North Melbourne. Beside him is recent addition to the elite level, Tim Kelly who passed his 50-game milestone this year, and already has an All-Australian nod to his name. Clinton Jones was a fierce tagger who fell one game short of 150, but was one who the Saints could rely on to nullify an opposition player.

On the wings is where the Bulldogs come to life with both Peter Matera and Nicky Winmar genuine stars of the 1990s. Matera won five All-Australians, a best and fairest, Norm Smith and polled more than 120 Brownlow Medal votes to go with his two premierships. Winmar played two less games on 251, and had a couple of All-Australians and best and fairests too. Surjan is a player who could push up and play on the inside if required, while McGrath was also capable of playing off a wing. Fremantle key position player Cam McCarthy earns the starting ruck spot due to a lack of options, but he is tall enough and capable enough of playing there.

The front six would absolutely bring fans to the footy. Brownlow Medalist Brad Hardie (150 games, 222 goals), West Coast full-forward Peter Sumich (150 games, 514 goals) and the short yet memorable career of Allen Jakovich (54 games, 208 goals) would make for front row viewing. The trio would make life incredibly difficult for opposition defences, never mind the smalls that are running around their feet causing mayhem. McCarthy could also fill a role there when resting from ruck duties.

The small forwards include Phillip Matera, Jeff Farmer and Mark Williams, all of whom could beat you in different ways. Williams is the most prominent lead and mark player of the trio, booting 347 goals in 115 games and won a premiership with Hawthorn. Farmer just loved sitting on opposition players’ shoulders and was ever-damaging close to goal, snagging 483 goals in 249 games. Matera could play midfield or forward, but was predominantly inside 50 where he finished his career with 389 goals from 179 games. Off the bench, fellow high-reel players in Andrew Krakouer and Ashley Sampi – who both won Mark of the Year at different points in their careers – and Brandon Matera could all fill the void.

Every eligible 100-game player bar two made the cut, with Scott Watters (109 games) and Dean Rioli (100) the only unlucky ones to miss out, with Sampi chosen over Rioli and McCarthy needed for ruck duties. Jakovich and Kelly were the only others to make the squad with less than 100 games to their name, but no one could dispute they deserve their place in there. Among other unlucky players to miss out were Leroy Jetta (93 games), Cory McGrath (78), Shane Kersten (66), Dean Irving (66) and Stevan Jackson (59), with Callum Ah Chee and Willie Rioli amongst the current players who could force their way into the side in coming years.