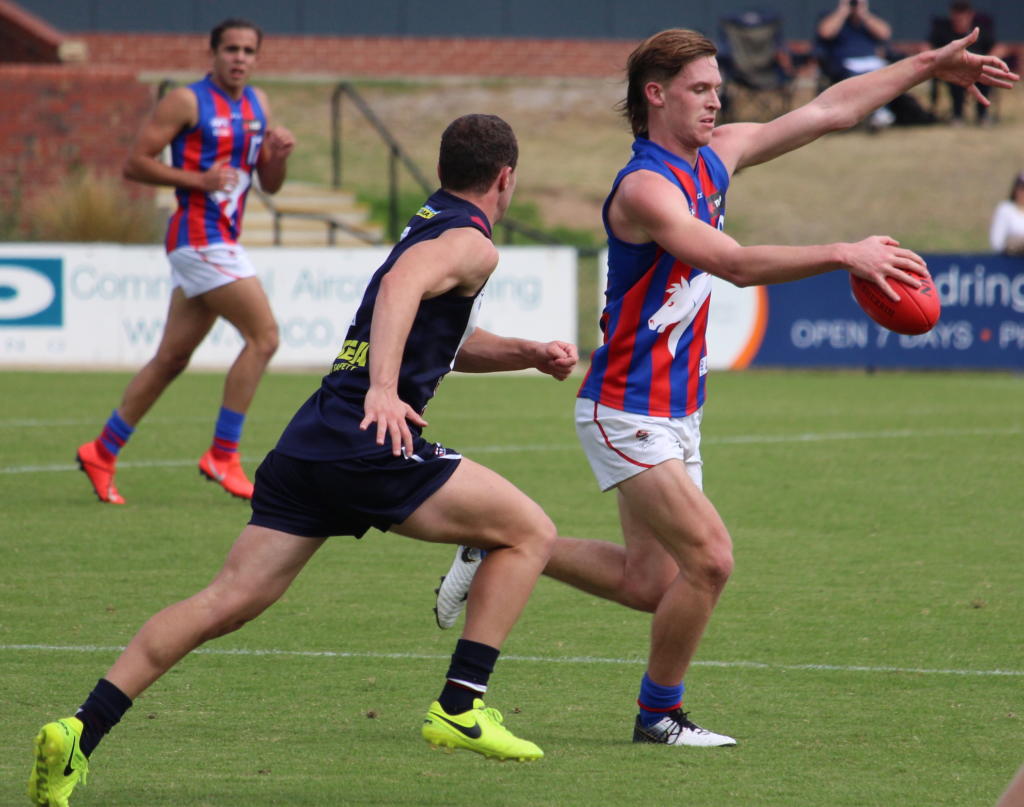 ROUND 17 of the 2019 NAB League was split into two triple-headers, with the six Metropolitan sides going head-to-head at Avalon Airport Oval on the Saturday, while Queen Elizabeth Oval hosted the six Country regions on Sunday, and Tasmania enjoyed a bye. Top three challengers Oakleigh and Eastern won out in thrillers, with a certain number two pick dragging the Chargers home, while a gun Next-Generation Academy prospect snatched four points for the Ranges with a kick after the siren.

But the weekend’s action started with a clash between Western and Northern, a game which saw the Knights handle the conditions better to run our 32-point winners. The Jets could not take full toll of their promising start, booting 1.4 to Northern’s 2.2 in the first quarter, before the latter pulled away with six goals to nil in term two to set up a game-defining margin. There would be little scoring after that, with the sides combining for just five goals after half-time.

Things really ramped up in the following fixture, as Connor Downie‘s post-siren set shot helped Eastern nab a four-point win over Calder from nowhere. The Cannons looked to have poked their noses in front at the ideal time as the lead changed hands on multiple occasions throughout the match, but a two-goal margin in the final term was quickly reigned back. In a last roll of the dice play, Downie would win a free kick inside 50 and sink the resultant shot to break Calder hearts and seal the minor premiership.

Eastern’s Lachlan Stapleton was massive in the clutch moments, and finished with 23 disposals and two goals in a terrific display of heart. Calder’s Jake Sutton beat him out in the goalkicking department with three majors, while Carlton draftee Sam Ramsay (27 disposals) and Mitch Mellis (26) led all comers in terms of disposals amid their back-and-forth midfield battle. Essendon’s Harrison Jones also looked lively up forward, booting a goal from 17 disposals and four marks.

If spectators thought that game would be the peak of entertainment for the afternoon, they were in for a treat when Oakleigh and Sandringham took the field. 11 eventual draftees were in action, including the top two selections, in what was one of the highest quality Under 18 games in recent history. After Finn Maginness booted the Dragons out to a 29-point lead early in the final term, Noah Anderson stepped up with back-to-back majors to help put the Chargers in front, before Cooper Sharman sealed the remarkable comeback to see Oakleigh home by seven points.

The cream truly rose to the top, with Anderson’s match-winning efforts seeing him finish with 24 disposals and three goals. Potential 2020 number one pick Jamarra Ugle-Hagan was spectacular in the air in his four-goal display, while Matt Rowell wowed again with a mammoth 34 touches. Darcy Chirgwin led the way in that department for Sandringham with 30 disposals, but it was Maginness who stole the show with three goals from his 17 touches. Bottom-ager Archie Perkins also snagged a hat-trick of majors, as the wealth of talent on show made for scintillating viewing.

Fast forward to Sunday and switching over to the Country regions, Gippsland opened the show with a 10-point win over hosts, Bendigo at Queen Elizabeth Oval. In another heartbreaker, the Pioneers led at every break, albeit by slim margins, but faltered at the last as the Power surged home with 4.5 to the home side’s 3.0. The quality was evident in this clash too, with eight future draftees running out for their respective sides.

Among them, Fraser Phillips was one of six players on either team to boot two goals, also adding three behinds from his 19 disposals. Riley Baldi put in a terrific shift with a game-high 27 disposals and two majors, while Thomson Dow was among Bendigo’s best ball winners with 24 touches and a goal. Charlie Comben showed promising signs in his ruck/forward role, collecting 12 disposals, three marks, 13 hitouts, and 1.3, while a pair of Pioneers bottom-agers also fared well – with Jack Ginnivan and Seamus Mitchell both earning multiple goals.

Geelong notched just its third win of the season, accounting for reigning premier Dandenong to the tune of 31 points in a convincing effort. The Falcons shot to a five-goal buffer at half time and never looked back, extending the margin to an even 50 points heading into the final break, and coasting home despite the Stingray’s best efforts to claw back the deficit. Remarkably, the Falcons only registered one more scoring shot than their opponents, with their accurate 15.9 proving the difference when compared to Dandenong’s 9.14.

Charlie Sprague capped off his over-age season with a bang, booting six goals as the Falcons’ spearhead. Bottom-age jets Oliver Henry and Tanner Bruhn also contributed two majors each, while Dandenong’s Lachlan Williams (three goals) was his side’s most potent mover. Another 19-year-old, Will Lewis led all comers with 24 disposals, followed by Geelong captain Jesse Clark on 23. The likes of Hayden Young and Cody Weightman ran out for Dandenong, but could do little to thwart the Falcons’ emerging talents from taking hold.

The final game of the 2019 regular season saw the Greater Western Victoria (GWV) Rebels down Murray by 15 points in a relatively low-scoring affair, with neither side able to take full advantage of their opportunities. It mattered little in the end for the Rebels, who produced a greater wealth of chances throughout the day, while the Bushrangers could only manage a goal per the first three terms.

Glenelg recruit Mitch Martin snagged a game-high three goals from 17 disposals as the only multiple goalkicker afield, showcasing all of his individual quality. Fellow Rebel Cooper Craig-Peters led all comers with 24 disposals, while Jye Chalcraft (22 disposals) and Cam Wild (21) fared best for the Bushies. Draftees Jay Rantall and Lachlan Ash were kept to 20 and 19 touches respectively, while a bunch of Under 16 talent shone through for both sides.