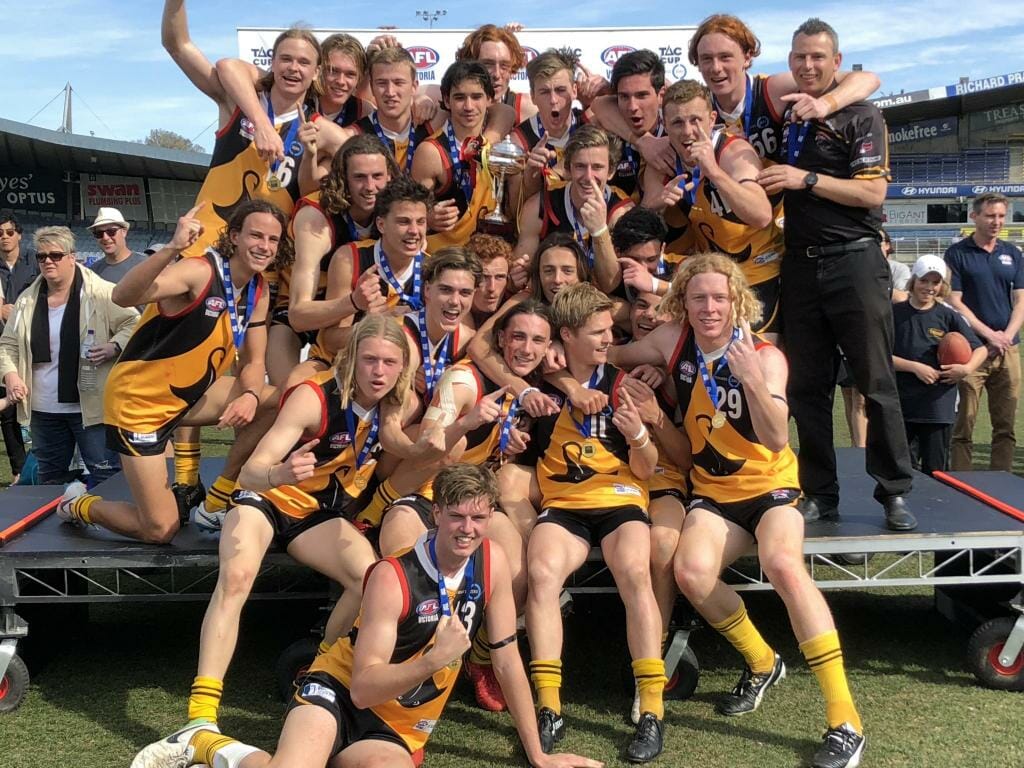 IF you are missing footy like we are, then let us somewhat salvage that with a look back our series of Classic Contests. In today’s contest we look at one of the would-have-been Round 17 clashes in the NAB League this year between the Dandenong Stingrays and Oakleigh Chargers. In this edition, we wind the clock back to the 2018 TAC Cup Grand Final, when Dandenong held off the Metro powerhouse to break through for its maiden premiership.

The premier Victorian Under 18 competition has a happy knack of producing memorable grand finals, and the 2018 decider between Dandenong and Oakleigh lived up to all the hype. The Stingrays came in as the team to beat having secured the minor premiership at 15-1 – any guesses as to which team beat them during the year?

Oakleigh was that side, having snuck home by a goal against Dandenong back in Round 5, though the Stingrays’ redemptive victory in their Round 9 reverse fixture had the head-to-head ledger locked at a dead-even 1-1.

Having finished third on the ladder with a 10-5-1 record, Oakleigh looked to be the form side of the competition heading into Grand Final week, with their two finals wins coming by a combined 213 points. Hardly outdone, the Stingrays had won 13 games on the trot and built a combined margin of 152 points en route to the decider.

As is often the case come season’s end, barring injuries, both regions would boast near full-strength squads, with Jai Nanscawen and Ben Silvagni the only two glaring absentees for either side.

As has often been the case, the two systems also produced a raft of draftable talent and boasted some of the more stacked lineups you’re likely to see at the level. Dandenong fielded all nine of its 2018 draftees and a further two from its 2019 crop. In response, Oakleigh managed to fit 10 of its 11 2018 draftees into the lineup, with four elite movers from the following cohort also making an impact.

Having conceded a seven-point deficit at the opening break, the Stingrays clicked into gear with four unanswered goals in the second stanza to set up what looked to be a game-defining lead. The lead remained heading into the final term, and Sam Sturt‘s goal early in the piece suggested Dandenong would cruise home to a breakthrough premiership victory.

The Chargers wouldn’t let up though, sending their opponents into panic stations with four-consecutive goals to draw within a goal, but desperation helped Dandenong hang on for a deserving six-point win.

2019 number one pick Matt Rowell would show an early sign of his value in important games, earning the medal for best afield in a losing effort. Fellow bottom-ager Noah Anderson was also exceptional with two final term goals, while Dylan Williams booted four for the day in a showing of his potential.

But Dandenong would get the job done, with skipper Campbell Hustwaite bossing the midfield alongside Sam Fletcher, while Riley Bowman stood up in a high level ruck tussle with Will Kelly, and Sturt proved his first round credentials with two goals. Another bolter, Riley Collier-Dawkins was named second-best for Oakleigh.

The loss seemed to spark a fire under the Oakleigh side, with the six under-age players to take the field on that day all contributing to the Chargers’ 2019 premiership triumph. Dandenong’s premiership defence did not go as planned, but the breakthrough win after five previous grand final losses will be remembered for years to come.