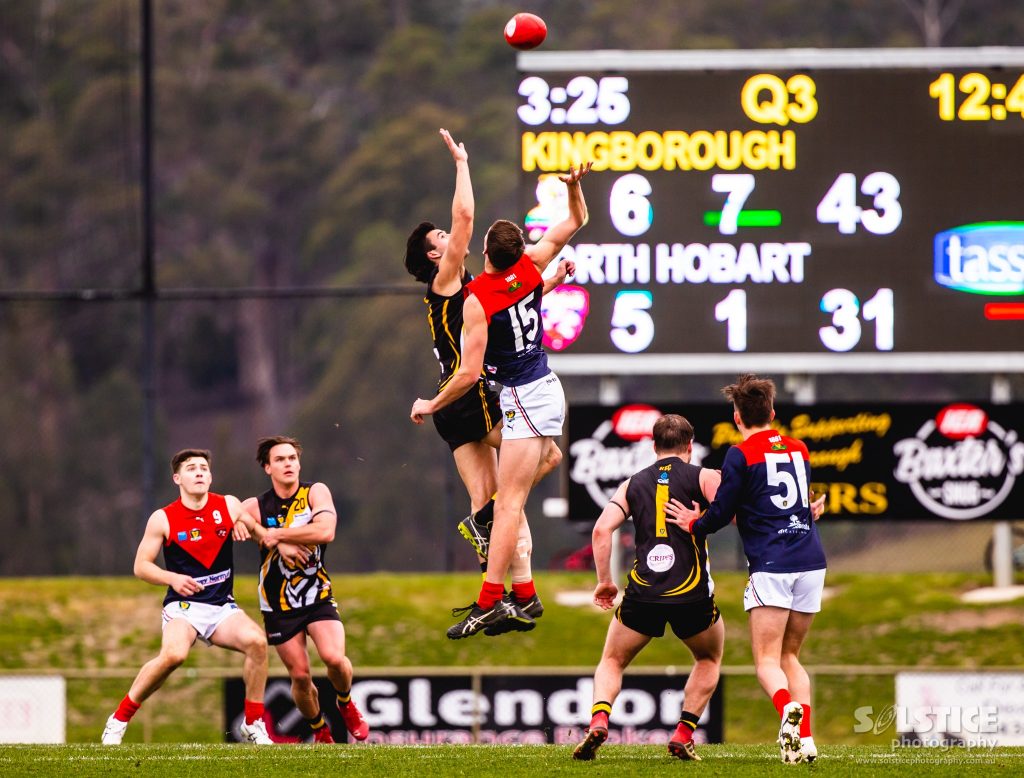 THREE more Tasmanian State League (TSL) Women’s sides join the action for season 2020 this weekend, as Clarence and Glenorchy face off, and Tigers take on Round 1 losers, Launceston. Both clashes are intertwined with the men’s games tomorrow, whilst North Hobart and Lauderdale also play off in the TSL, as reigning premier North Launceston has the bye.

Launceston finally claimed a win over North Launceston last week, the first time in seven years and 18 tries that the Blues have been successful. The 19-point victory followed on from a 26-point triumph over Glenorchy the week before, as the Blues top the ladder after two rounds. Tigers had a bye in Round 1 and then were unlucky against the improved North Hobart, going down by 10 points in a neck-and-neck contest. They host the Blues this week in what is anticipated to be a tough game for the home side, so the Tigers need all the support they can get to try and cause and upset.

Dylan Riley and Jake Hinds have both slotted four goals in the first two games, identifying as a couple of dangerous players, while Jay Blackberry showed he can break a game open inside 50, booting a couple in quick succession to lead his team to victory against the Bombers. Young talent Jared Dakin was superb last week and named best on ground for his work on opposition playing coach, Taylor Whitford, and it will be interesting to see what role h has this weekend. The Tigers only have the one game to go off, but Luke Graham snagged three majors as Cooper Sawdy and Tyler Carter both kicked a couple. Kieran Lovell impressed and will be one to stop for the opposition.

Last week the Launceston TSL Women’s side had a low-scoring 25-point win over the Bombers with a three goals to nil second half. Brooke Brown booted two majors and Angela Dickson slotted one, while North Melbourne duo, Daria Bannister and Mia King were superb for the winners. While Tigers are yet to play this season, last year saw the likes of Cara Brooke, Maria Neal and Hailee Baldwin impress, named in the best nearly every game they played. Paige Flakemore led the goalkicking with 13, though Tigers finished fifth on the table, and the last match against the Blues, suffered an 81-point defeat.

Clarence and Glenorchy both side in the bottom two spots on the 2020 TSL ladder, although it is hard to read too much into it given the early stage of the season. The Roos went down to Lauderdale by 41 points in the opening round, as Jeromey Webberley was the only multiple goalkicker in that contest. They have a number of top young talents in the side, with the likes of AFL Draft top-ager, Oliver Davis and bottom-ager, Sam Banks joining over-ager, Ethan Jackson as part of the Roos young group. The Magpies also suffered a loss to Lauderdale last week, but were much closer, going down by 12 points following a 26-point defeat at the hands of Launceston in Round 1. Aiden Grace is leading the goalkicking with three, one ahead of the only other multiple goalkicker in Adam Roberts, while ex-AFL talent Zac Webster is always a dangerous prospect.

Last year’s upset reigning premiers Clarence will unfurl the flag at home in the opening game of the season against Glenorchy, one of the teams the Roos had to topple on their way to stunning the previously unbeaten Launceston on the biggest day of the year. Now both teams enter 2020 with new hope, but no doubt the Magpies will be keen for revenge after going out in straight sets last year. In the 28-point win to Clarence, Jessie Williams was best on ground booting a goal, while the likes of Natalie Pearce, Grace Mitchell and Melanie Wise all booted multiple goals. Young talents Amy Prokopiec and Netty Garlo also ran around for the Roos. The Magpies had Nietta Lynch and Natalie Daniels slot a couple of majors each, as Brieanna Barwick and Gennaveve Sullivan were impressive despite the defeat.

In the final TSL match, second placed Lauderdale face off against third placed North Hobart in what is anticipated to be the match of the round. North Hobart almost ran over the top of reigning premiers, North Launceston in the opening round, then travelled to Kingborough to knock off Tigers by 10 points. In their first home game of the year, they host the unbeaten Lauderdale side that has taken care of Clarence and Glenorchy in the opening two rounds. This might be a big test for the Bombers however, as those two sides sit in the bottom two currently. Toutai Havea has been on fire for the Bombers, leading the league’s goalkicking with six majors in two games. Tyler Martin is not too far behind him on three, whilst the likes of Adrian Kalcovski and Josh McGuinness are also multiple goalkickers. For the Demons, key position utility Jake Steele has proven valuable up forward with four goals, while Round 2 inclusion Nathan Hardy slotted three last week. Tasmanian AFL Draft hopefuls, Patrick Walker and Jye Menzie both have two goals to their name, while Sam Collins is another name to keep an eye on in the red and blue.