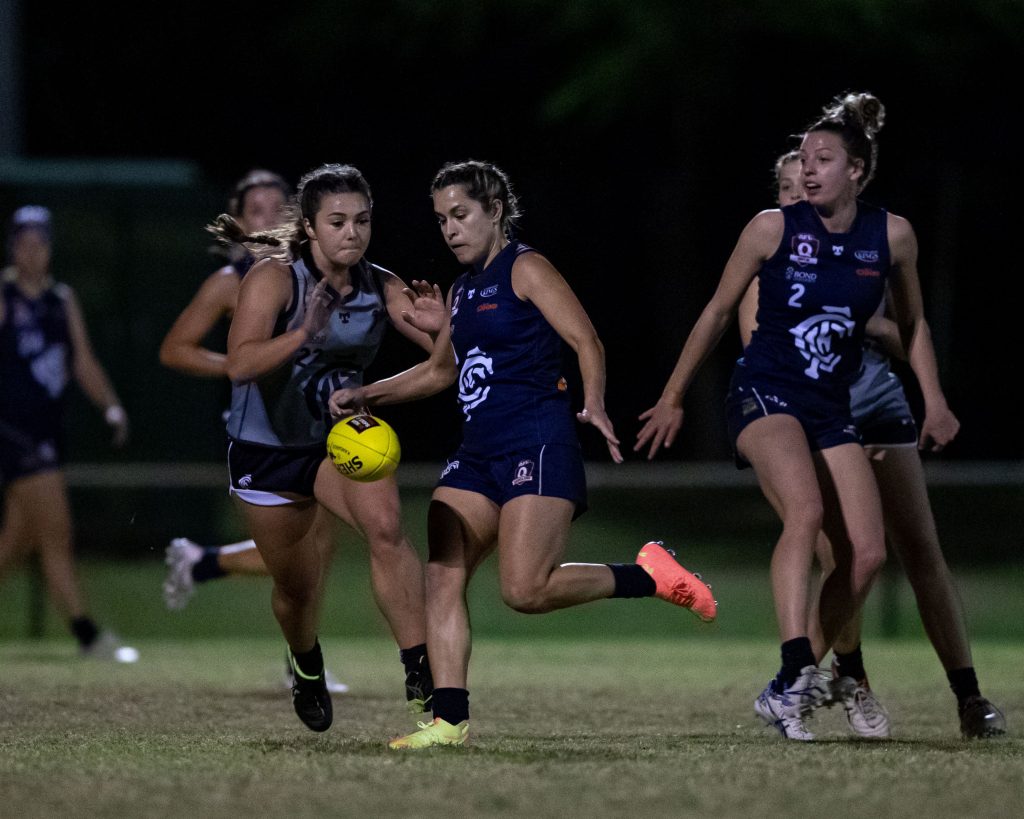 ROUND 6 of the Queensland Australian Football League (QAFL) Women’s has a potential grand final preview between two high-powered sides in Coorparoo and Bond University, whilst another contender and ladder leader in Maroochydore faces a big challenge in Coolangatta Tweed. In other games, Yeronga South Brisbane goes up against Wilston Grange, and University of Queensland hosts Aspley Hornets.

Our match of the round for Round 6 is Coorparoo up against Bond University which has developed into a top three clash. The Kings are red-hot since welcoming a stack of AFL Women’s talent into their midst, winning the last three games, and most notably the past two with a 93-point shellacking of Aspley Hornets, and an impressive 34-point win over Coolangatta Tweed. After losing their first two games of the year, the Kings are up to third on the table, and will leapfrog Bond University with a win. The Sharkettes are far from an easy beat however, maintaining a really consistent performance throughout the year since dropping their first game to Coolangatta Tweed in Round 1. Three wins and a cancellation draw later and the Sharkettes are only four points away from Maroochydore and within reach of top spot.

The Kings have so much firepower up forward with Emma McKenzie leading the goalkicking having played the four games and booted eight, while Jess Wuetschner (five) and Chelsea Chesterfield (four) are also dangers up forward having just joined the team in the past couple of weeks, while Kelsey Crosbie booted eight from the three games prior to lockdown. Young talent Jade Ellenger has been impressive throughout the year named in the best multiple times, while fellow Lions AFL Women’s talents in Emma Zielke and Ally Anderson make the Kings the team to beat on paper.

Jasmyn Davidson leads the Sharkettes goalkicking after a five-goal haul last week, as Bond University have a number of multiple goalkickers including Lydia Pingel (four). Caitlin Thorne (three goals), as well as teenagers, Taylor Smith and Maddison Levi (three each) are also hitting the scoreboard. Another young up and comer in Annie Muir has been named amongst the best four out of a possible five times, while Gold Coast young guns, Ellie Hampson and Charlotte Hammans are front and centre of a team that has so much young talent it is spilling over. In many ways, this clash has experience up against the future, and it could be a potential grand final preview.

It is hard to split either of these teams with both sides in terrific form. Perhaps the experience of the Kings nudges out the Sharkettes marginally, but there is plenty to like about Bond University and what the second placed side can produce when it is on fire.

The sole undefeated side in 2020 remains the hunted so far, with Maroochydore passing each test that has been thrown its way. Yet to face the other two title contenders in Bond University and Coorparoo since they were bolstered by their AFL Women’s yet, the Roos will now set their sights on Coolangatta Tweed in what should be an entertaining contest. Maroochydore will start favourite after four wins and a draw, and the fact that the Bluebirds have dropped a bit since the break. On the other side of the coin to Maroochydore, Coolangatta Tweed have played the two likely title contenders in the two rounds since returning to competition and were far from disgraced. They lost to Bond University by four goals and Coorparoo by 34 points, and this match will give the Bluebirds as much of an indication about where they stand, as it will for Maroochydore.

Ashleigh Hales leads the Roos’ goalkicking this year with an average of a goal a game from her five matches. Chloe Gregory, Jacqueline Dupuy and Mikayla Pauga all have four goals to their name, and a host of others have also hit the scoreboard. Maggie Harmer and Ruby McDowell have been the Roos’ top performers this year named in the best three times, while the young Brisbane Lions talent in Lily Postlethwaite and Isabel Dawes, and the experienced Tahlia Randall make Maroochydore a hard team to beat.

Three players share the Coolangatta Tweed leading goalkickers with Ahlani Eddy, Selina Priest and Uma Brennan all having slotted the three majors. Alex Hamlyn and Sally Riley have two apiece as the other multiple goalkickers for the Bluebirds. Casey Samuels is in some great form this year, named in the best the most of anyone on her side, while the Bluebirds have some AFL Women’s talent of their own in Georgia Breward, Kate Surman and Hannah Dunn among others. Maroochydore is a deserving favourite in this game, but the Bluebirds will give the Roos a real challenge.

The earliest game of the day pits Wilston Grange up against Yeronga South Brisbane with the Gorillas looking to win their first game since Round 1 when they accounted for the Red Lionesses by 11 points. Since then they have suffered three losses and a cancellation draw, including going down to the Devils by five goals. On the other hand, the Devils might have forgotten what that winning feeling is themselves, but not necessarily through losing. Yeronga South Brisbane burst out of the blocks with a couple of wins and then suffered a loss prior to the COVID-19 shutdown, but upon return have mustered up two draws. Back-to-back draws for the same side is unusual, so the Devils will be hoping lightning does not strike a third time and they can take home the points.

Jordan Zanchetta kicked the goal that ensured the Devils went home with something last week, and she has been impressive in her four games this season. Likewise, Lucy Bellinger has stood out, while Madison Goodwin and Vanessa Hart are others who have impressed in their time this year. The Devils hare the goals around with already having 15 individual goalkickers in five games, a real feature of their style.

For Wilston Grange, Kaitlyn Day has been the standout running around, while the experienced Catherine Svarc has been a welcoming return. Imogen Stackelberg and Kristen Tyquin are among those who have hit the scoreboard multiple times this year and will be looking to do so again in this clash. The Gorillas are up against it in this contest, expect the extra experience of the Devils to win out and shake off their past two draws with the four points.

After three consecutive losses to start the year and a draw upon return back in Round 4, the University of Queensland finally broke through for its maiden win of 2020 by downing Wilston Grange. The Red Lionesses blew away the Gorillas by 44 points in an impressive performance, and have come good at the right time to face an Aspley Hornets side that has really struggled without AFL Women’s experience. There are some consistent performers for the Hornets, but they have been met with some heavy defeats, losing their last two contests by 93 and 65 points and only kicking a goal from the two games combined. It is fair to say the revamped Red Lionesses head into the contest as heavy favourites in front of home fans.

Dakota Davidson is leading the goalkicking for the University of Queensland, slotting five goals in four games, ahead of Megan Hunt, Breanna Koenen and Greta Bodey who all have he two majors. Hunt has been one of the starring Red Lionesses, named in the best four out of five games, while Koenen and Davidson have made quite the impact off the two games since returning to the competition.

The Hornets have only kicked the six goals this year with Michaela Campbell and Rachel Crawford both slotting two, while Kylie Guarino and most recently, Phoebe Baird kicking one each. Baird is someone who has made an impact coming into the side since the break, named as a starring Hornet so far this month, and provides great relief to the likes of Courtney Daniel, Isabella Kotatis and Shaye Easton who have all been superb in defeat this year.