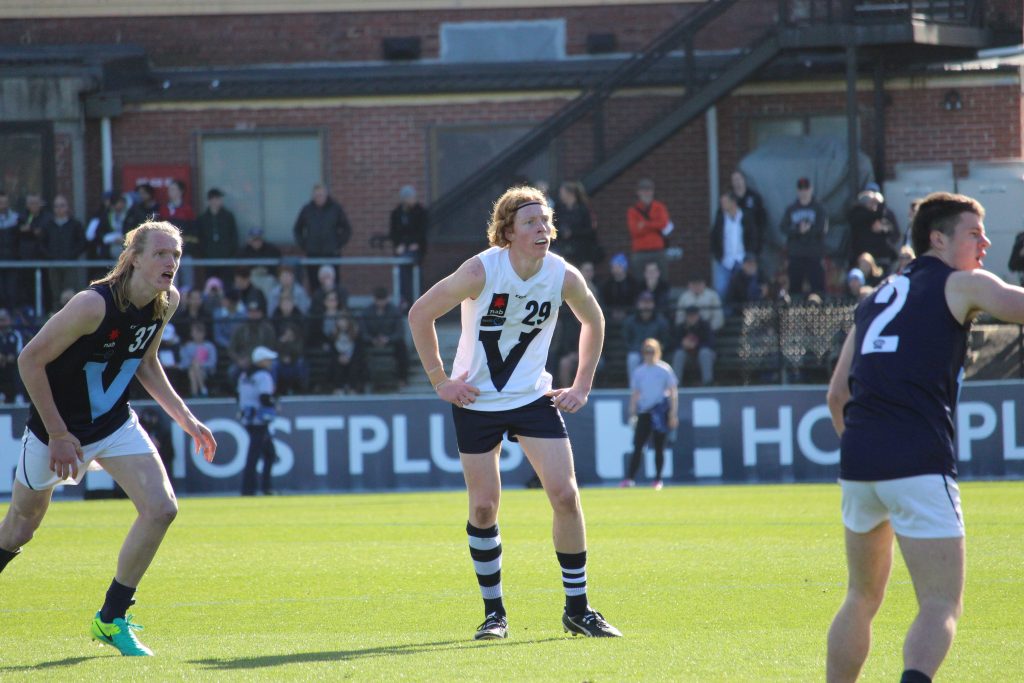 ROUND 8 of the AFL Premiership Season got underway last night, with Western Bulldogs youngster Callum Porter finally earning a shot at the bigtime in his side’s win over Gold Coast. There are a further six players in line to make their AFL debuts over the weekend, headlined by a trio of promising Eagles. We take you through the full list and give a little reminder of what each player may bring to the table.

Sydney fans will finally get the chance to see their club’s 2017 AFL Draft first rounder, Matthew Ling in action, as the classy Geelong Falcons graduate lines up against Hawthorn. Having paved his way to the elite level as an outside midfielder with terrific speed and foot skills, Ling could look to utilise his best traits off half-back or that patented wing position. Injuries have halted his progress thus far, but a clean run at it now may well see him make a mark on the Swans’ side.

Keegan Brooksby is another feel-good story out of team selection this week, set to line up at centre half-back for the Hawks. After playing 14 times for the Gold Coast SUNS and being shifted over to West Coast, the perennial rookie gets a shot at his third club having been picked up during the pre-season supplemental selection period.

High-flying Eagle Bailey Williams is among three West Coast players in line to debut against Collingwood on Sunday, with the former Dandenong Stingray among five hopefuls named on an extended bench. Only one change has been confirmed, with Brendon Ah Chee out injured, and Luke Shuey the likely replacement. Still, Eagles fans will be keen for a glimpse at the ruckman/key forward, who has an enormous vertical leap and clean hands overhead.

Harry Edwards and Nic Reid are the other two potential fresh faces looking to crack the senior side. 19-year-old Edwards is a versatile prospect who, at 197cm, can play both tall and small having enjoyed a sizeable growth spurt. Mature aged recruit, Reid is another supplementary selection period draftee who has embarked on a steep rise to the top having been snapped up through the Eagles’ WAFL side. The well built 24-year-old will look to add goals to the lineup.

Lions Academy graduates Connor Ballenden and Keidean Coleman are among a list of five Brisbane players named on the extended bench for Sunday night’s meeting with Melbourne, with the injured Stefan Martin the only outgoing player at this point. Key position utility, Ballenden has been close to a berth on a couple of occasions already this season, and may be even closer now as he looks to bolster Brisbane’s tall department. Coleman is an exciting medium-small prospect who thrived in his 19-year-old season, turning out for the Lions’ NEAFL side and showing great improvement. He can play up either end, with speed and skill the key features of his game.