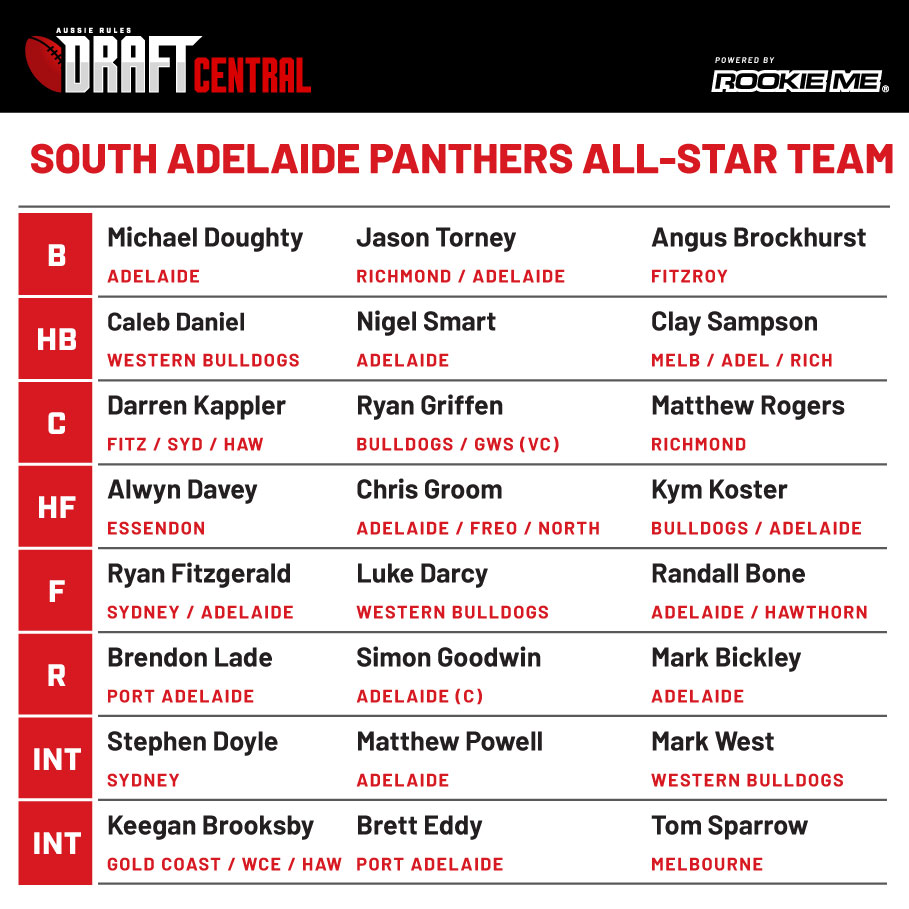 SOUTH Adelaide Panthers have some serious top-end talent at their disposal in the Panthers’ All-Star Team of the AFL Draft era. With a strong midfield and multiple ruck options, the Panthers would win plenty of clearances and give their forwards first opportunity to score.

The South Adelaide side is riddled with a number of former-Crows, headlined by dual premiership winning midfielders Mark Bickley and Simon Goodwin – both of whom captained Adelaide. The Panthers have also produced two top tier ruckmen in Luke Darcy and Brendon Lade. Whilst they have not quite produced the same amount of talent in recent years, Caleb Daniel appears destined to have a long career in the AFL.

The South Adelaide backline features a strong tri-coloured flair, with four of the starting six having played for the Adelaide Crows. Dual premiership-winning utility Nigel Smart is named at centre-half-back for his ability to play on both small and tall opponents. Also a weapon up forward, ‘Smarty’ kicked 116 goals in 278 games at AFL level and was a three-time All-Australian. Smart’s premiership teammate Clay Sampson earns a spot on the back-flank. He played 64 AFL games and, like Smart, was also used up forward at times, kicking a total of 36 majors.

Skilful and extremely smart with high endurance, current-Bulldog Daniel is perhaps South Adelaide’s most successful product of recent years. An integral component of the Dogs’ successful 2016 campaign despite his small stature, Daniel has played 95 games since debuting in 2015. Durable and reliable former Crows defender Michael Doughty was an obvious selection in the back pocket, after playing AFL 231 matches. Jason Torney‘s 118 games with Richmond and 77 with Adelaide earned him a spot at full back, with Angus Brockhurst named beside him.

The Panthers onball brigade is headlined by a trio of South Australian footballing champions. A brilliant tap-ruckman and excellent tall forward, Lade kicked 182 goals in 234 games with the Power. A premiership player in 2004 and two-time All-Australian, the Kangaroo Island product is one of South Adelaide’s finest. AFL Hall of Famer and current Demons coach Goodwin played 275 games in a decorated career with the Crows. Amongst a multitude of personal accolades, ‘Goody’ was a dual-premiership player, a five-time All-Australian, three-time best and fairest winner and captain of the club from 2008 until his retirement in 2010.

Alongside Goodwin in the starting first ruck is Goodwin’s former-captain Bickley. Skipper of the club in their back-to-back premierships, Bickley was a skilful midfielder who managed 272 games in the AFL and was regarded as an exceptional team-man during his 13 year career. Goalkicking midfielder Darren Kappler earns a spot on the wing for his 187 AFL games with Hawthorn and Sydney. Another wingman with goal-kicking abilities, Matthew Rogers is also included in the Panthers ‘best 24 of the AFL era’, whilst former-Bulldog and Giant running machine Ryan Griffen is deserved of his selection as the starting centre-man.

Although better-known for his comedy, third-tall Ryan ‘Fitzy’ Fitzgerald managed 23 goals in just 18 AFL games with Adelaide and Sydney. Providing speed and a tough of magic is former Bomber Alwyn Davey, who is selected after playing 100 matches and kicking 120 goals during his time at Windy Hill. Yet another Crows premiership player, Kym Koster earns a spot on the forward-flank. First drafted by Footscray, Koster returned to his native South Australia to play a role in the Crows back-to-back flags. A Crow before heading to Hawthorn, Randall Bone further adds to the Panthers tall timber in attack.

Despite their star power in the midfield, South Adelaide lacks a bit of depth on the bench. Journeyman ruckman Keegan Brooksby has certainly moved around since being drafted in 2015, playing 14 matches with Gold Coast before a one year stint at West Coast. He is currently listed with Hawthorn. Fellow tall Stephen Doyle and strong-built small defender Matthew Powell also gained selection, along with dreadlocked midfielder Mark West, who was yet another South Adelaide product to head to the Whitten Oval.

A two-time SANFL leading goalkicker with the Panthers, Brett Eddy earned an AFL call-up from the Power, where he played three games. Rounding out this side is current Demon midfielder Tom Sparrow, who has shown glimpses of his explosiveness and ball-winning talent in a couple of AFL games to-date.