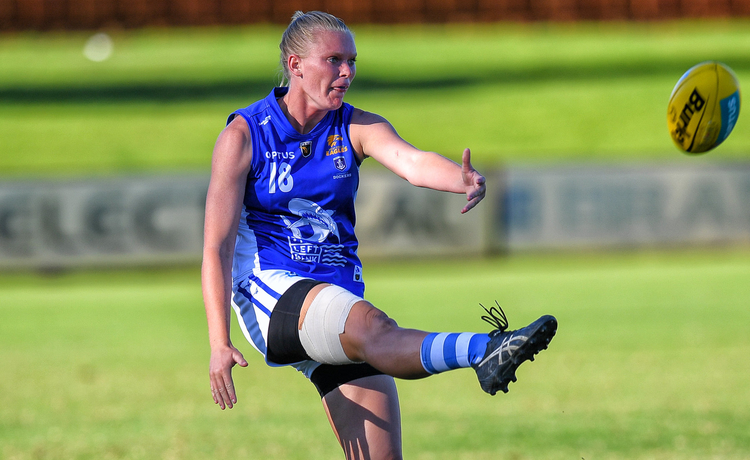 EAST Fremantle showed no mercy to league newcomers and Derby rivals, South Fremantle during an 88-point drubbing at Fremantle Community Bank Oval. The reigning premiers might not have had an AFL Women’s talents on the field, but it was a new inclusion of ex-Subiaco sharp shooter Sara Lewis up forward that shone booting four goals and was one of five multiple goal kickers in the 14.4 (88) to 0.0 (0) victory.

Katelyn Catalano, Stephanie Sparke and Chloe Reilly all looked dangerous in the forward half of the ground, while top-age talent Hayley O’Donnell mopped up off half-back in what was a day that the Sharks’ defence did not have a lot to do. At times South Fremantle looked like scoring, particularly early in the final term, but East Fremantle were in control from the opening bounce and the flood gates opened in the third term when the winners piled on seven straight goals. Among the best players for South Fremantle were defenders, Breanne Spencer and Chloe Taylor who tried hard throughout the contest taking multiple intercept marks.

Lewis looked like she was going to be in for a massive day, booting the first goal of the game from the top of the goalsquare, and then two more early in the third term to sit on four with almost a full half remaining. Whilst she did not add to that total, it was the likes of Emily Burton (two), Catalano and then Reilly in the final term who all booted majors to put an exclamation mark on the performance.

It was an accurate performance from the Sharks who managed to boot the 14.4 and were able to be reliable with their set shots, but their pressure inside 50 was also a feature. On a number of occasions when it looked as if the Bulldogs would clear, an extra Sharks tackle would allow the ball to be spilled and East Fremantle scored on the turnover.

Some of the highlights of the day included Lewis’ contested marking, Reilly’s clever snap around her body after fending off and opponent in the final term, and the third term by Sharon Wong who suffered leather poisoning with her weaving in and out of the contest. She was rewarded with a goal over the top in the term after a contest from Lewis spilled over the back and a quick handball found Wong all alone for the easiest of goals.

Burton who was helped off late in the game showed her touch of class not long after by forcing a fumble from her direct opponent, then controlling the ball well to tap over her head and grab it cleanly for another goal in the goalsquare. The most noticeable difference between the teams was East Fremantle’s effectiveness with its ball movement, while South Fremantle was not quite as clean due to it being the first official game played together with a lot of inexperienced talents still learning to gel.

Overall it was an impressive statement from the reigning premiers who take on Lewis’ ex-team Subiaco next weekend, while South Fremantle face Peel Thunder.

It is remarkable to think that the talented forward is still a year off being eligible to be drafted, but it was clear as day that there is plenty of upside there. Reilly had one of those threatening days where if a few marks had stuck or a ball had bounced the right way in the first half, she could have had a massive day out feasting on the Bulldogs. Instead, it did not quite go to plan on the scoreboard until the final term where she got her just rewards with a couple of majors. The first was a talented snap around her body after waiting an eternity in the hole, forced to spill the mark, fend off an opponent then produced a clean finish. With her confidence up, Reilly soon made it two goals with a nice long-range set shot from 45m out in. Overall, it will be fascinating to see what she can produce with the first game out of the way and finishing so strongly.

In other results, both Swan Districts and Subiaco won in thrillers to round out the opening weekend of the modified season. Swan Districts got up in a thrilling contest against Peel Thunder, defeating the Thunder by just six points after the teams were level at half-time. Subiaco had an even greater nail-biter, winning by two points over Claremont in a low-scoring 4.4 (28) to 4.2 (26) victory.

Kira Phillips booted three goals for the Thunder to be second in the leading goalkicker award behind Lewis, while Swan Districts had a trio of players kicking multiple goals in Tara Stribley, Mikayla Morrison and Fiona Boucher. Krystal Carter also booted a couple for the Thunder. Among the top performers for the Swans were Lauren Osborne, Aimee Ralph and Mikayla Hyde, while Tanisha Anderson, Abby Barnden and Courtney Rowley were also impressive in defeat for the Thunder.

In the Subiaco-Claremont game, Philippa Pienaar was the only multiple goalkicker with two majors. Jayme Harken, Claire Ortlepp and Tylor McIntosh stood out from a Lions perspective in the narrow victory, while Jacinta Valenti, Brooke Whyte and Ella Smith were named in the best for Claremont.