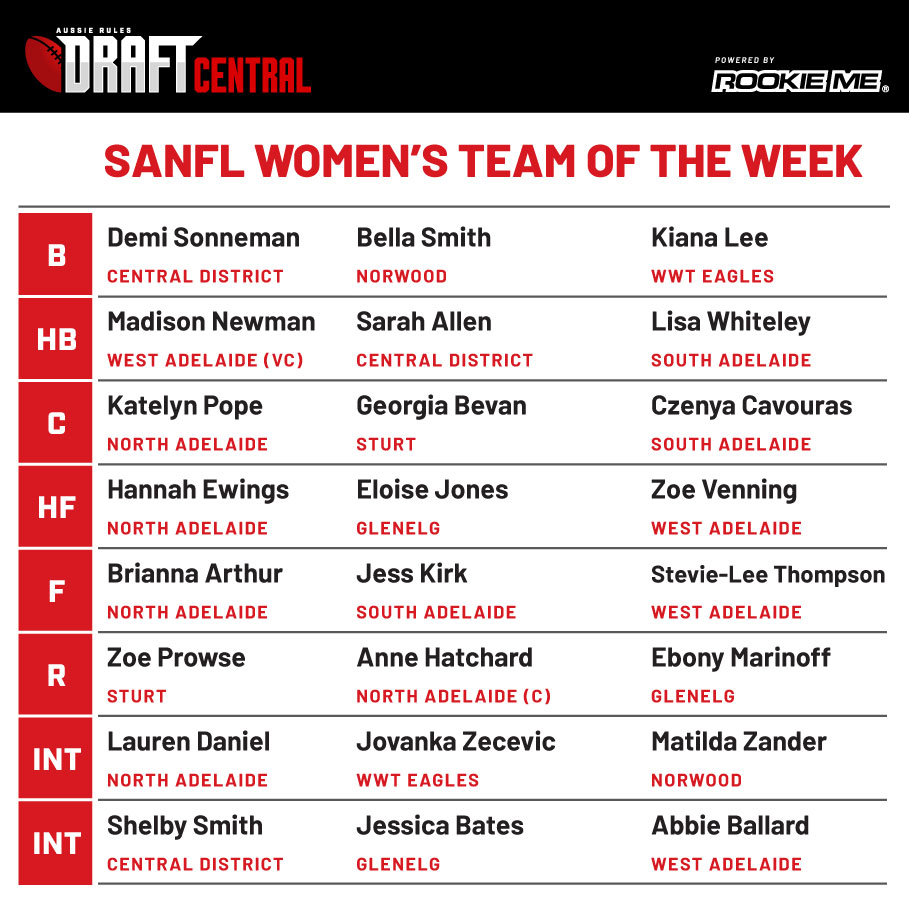 NORTH Adelaide’s 86-point demolition of Woodville-West Torrens has earned them a round-high five players in the Draft Central South Australian National Football League (SANFL) Women’s Team of the Week for Round 8. In a round where every side had some impressive individual performances, the nominations were evenly spread with West Adelaide (four) the next highest. Both South Adelaide and Glenelg managed three players apiece in the side, while Central was brave in defeat and had three. Norwood and Sturt drew and recorded two apiece, as did Eagles who despite the heavy defeat still had contributors.

North Adelaide’s high five starts with this week’s captain and Team of the Week regular, Anne Hatchard in the midfield. She starts onball in a midfield that also contains teammate and speedster, Katelyn Pope. At half-forward, young gun Hannah Ewings makes the side yet again and could have squeezed into the midfield had it not been for some seriously strong performances, while Brianna Arthur slots into a pocket following a productive two-goal effort inside 50. Rounding out the five is Lauren Daniel on the bench who provides extra support to already stacked midfield.

Wet Adelaide is renowned for its youth, so it is no surprise to see three teenagers make the side from the Bloods. Madison Newman is awarded the vice-captain efforts for her super performance at half-back this round, while up forward Zoe Venning joins the experienced Stevie-Lee Thompson. Abbie Ballard is the fourth Blood on the side, named on the interchange.

South Adelaide had the three players in the team following the win over Glenelg, with midfielder Czenya Cavouras and defender Lisa Whiteley sensational throughout the Panthers’ win. Also making it in is forward Jess Kirk who kicked a couple and helped set up some more for her teammates. Also in the team from that game was Glenelg ball winner Ebony Marinoff who makes the side along with key forward and fellow Adelaide talent, Eloise Jones, as well as Jessica Bates who played well in defence.

In the loss to West Adelaide, Central held firm in defence for the most part with Demi Sonneman and Sarah Allan both making the team. Allan played through the ruck but went into defence to help out later in the game and has starred since returning to SANFL Women’s level. Shelby Smith played another strong four-quarter game in midfield and earned a place on the bench. Also in the back six was Woodville-West Torrens’ Kiana Lee who played a full game at full-back after being a natural forward, and she was strong in the air, joining utility Jovanka Zecevic who seemed to be everywhere in the defeat.

From the low-scoring draw between Norwood and Sturt, it was difficult to pick standouts in such an even performance, which is why there are only the two each from the sides. Those two from each side certainly did their best to will their side across the line, with young talents Bella Smith and Matilda Zander in the team once again, as were Sturt young gun Zoe Prowse, and co-captain Georgia Bevan. The three emergencies for the team this week were regular Team of the Week standout, Rachelle Martin, as well as Sturt’s Alex Ballard and Norwood’s Alison Ferrall.

DRAFT CENTRAL SANFL WOMEN’S TEAM OF THE WEEK: ROUND 8