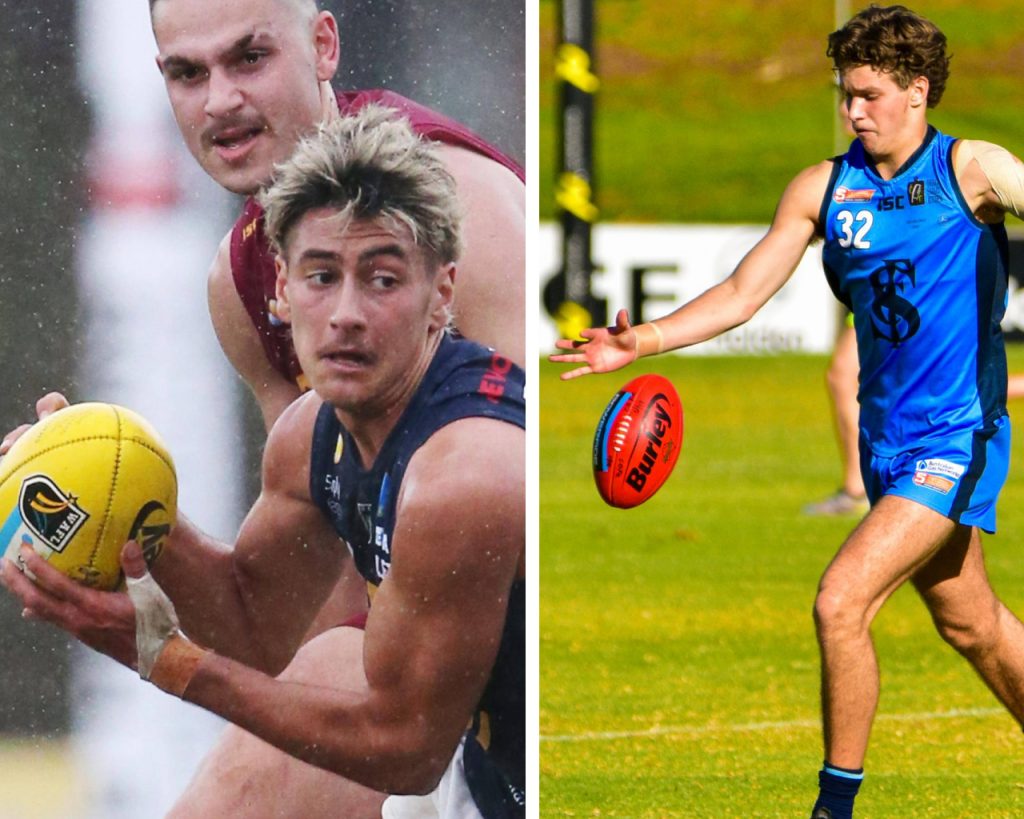 WHILE the South Australian National Football League (SANFL) rolled onto Round 4 of its 2020 competition, the West Australian Football League (WAFL) made its return over the weekend, with a bunch of young stars running out across both states. In a first for the Caught the Eye series, we compile the best performances from two competitions; highlighting the Round 4 SANFL Under 18 standouts, and those who put their name in lights in the WAFL Colts Round 1 featured fixture. For extended profiles on each player, click on their names highlighted in red.

Our scouts said: “The second of WWT’s bigmen, Smith played as a permanent forward and looked the most likely aerial target afield… what was most impressive about Smith, contested marking aside, was his ability to impact the play after aerial contests, with solid tackling efforts and touches at ground level adding a handy dimension to his game.” – Michael Alvaro

Verdict: It was great to see Smith return to action for the first time in 2020, and he definitely played a key role in getting the Eagles over the line for their first win. Along with skipper Zac Phillips, Smith is hard to stop at full flight when he is allowed to get a good jump at the ball up forward, and provides the added bonus of being able to ruck inside 50. With his ability to impact the play at ground level, Smith may well be one to keep tabs on in the coming weeks.

Our scouts said: “While he is still a touch raw and had a couple of costly moments amid the speed of the game, Dowling kept his head up and was able to impact the play when it mattered. His work rate to burst forward from midfield was impressive, and played a big part in helping him register chances on goal.” – Michael Alvaro

Verdict: There have been a few 16-year-old jets to make an immediate impact on the Under 18s competition, and Dowling put his name in lights as the most recent to do so. The Roosters midfielder had a terrific final term where he looked the most likely outlet up forward, booting three goals to cap off his promising debut. The signs are certainly there, and if he can sure up his kicking under pressure and more consistently showcase his talent, he will be a real asset for North Adelaide going forward.

Our scouts said: “Linke again provided plenty of pressure from his midfield role. His taller frame complemented the smaller (Lewis) Cowham and (Austin) McDonald in the Bulldogs midfield. Although the Tanunda prospect made a couple of mistakes by foot, he competed well at ground level all day.” – Tom Wyman

Verdict: The tall midfielder has been a rather consistent figure for the Bulldogs and while he was unable to properly impact the scoreboard on this occasion, his usual ability to find both the ball and the goals is a desirable trait. Though he is outside the state academy bubble, Linke’s frame and upside suggest he could break through in his top-age season if form persists.

Our scouts said: “He started slowly but worked into the game, finding more of the ball as the game wore on… with his attack on the ball and tackling pressure evident, despite his smaller stature.” – Tom Wyman

Verdict: After earning his way to a League berth via the Reserves, it has been a difficult start to life at the top level for Nelligan. Despite that, the diminutive forward looks to be adapting to the level well after two weeks, having found more of the ball and maintained his pressure output against the Bulldogs. Norwood has been known to give chances to its best junior talent, and Nelligan will surely benefit from the experience massively in his top-age campaign.

Our scouts said: “The talented bottom-age key position prospect started the game slowly, but really grew into the contest and proved to be the main source of scoring for Sturt once again… Ferres would go on to kick the match winning goal, getting into free space and coolly slotting the set shot.” – Ed Pascoe

Verdict: This kid really is one to watch. Standing at 188cm, Ferres plays more like a key position forward with his strength in one-on-one situations deep, and ability to kick big bags of goals. But that is not the extent of his talent, with the Double Blues bigman also able to push further afield to impact with his marking power, and possessing terrific all-round athleticism for his size. He was just as effective for SA at Under 16 State level, and is often too far developed for his junior opponents. He leads the competition goalkicking charts with 15, and still has a year left to improve.

Our scouts said: “Roberts was on fire early… his ability through the midfield was again on show, not only using his strong fame to win clearances but also using his smarts and work rate around the ground to provide an outlet.” – Ed Pascoe

Verdict: The Panthers’ midfield is so well balanced and talented, with Roberts a key part of the mix. While his nous around the contest allows him to extract his own ball, he is just as damaging on the outside where he can better size-up the situation. Add to that Roberts’ scoreboard impact, and you have a great midfielder/forward package. He’ll be hard to stop alongside Jason Horne this season, and in 2021.

Our scouts said: “The Bloods had no answer for Pedlar, as the big-bodied midfielder used his strength in aerial contests and stoppages to out-body his opponents, get to the ball first and hold strong marks. He controlled his aggression to ensure that while he laid crunching tackles, he did not give away unnecessary free kicks.” – Tom Cheesman

Verdict: There were a host of Tigers who could have snatched this spot for their performances over the weekend, but Pedlar has simply done it best, for longer. The explosive midfielder does not just use his strength to overwhelm opponents, but is quick and aggressive in his forward bursts. His penetrating left boot could do with some refining in the short range, but Pedlar is also able to use it to hit the scoreboard, making it a real asset. Presence is always a key factor when analysing a player, and Pedlar definitely has it.

Our scouts said: “It was a tough day for the Bloods after quarter time, but Chamberlain tried his best to keep them competitive. The AFL Academy Hub member worked hard up and down the wing, using his explosive speed to find the footy and break away from opponents.” – Tom Cheesman

Verdict: Chamberlain is definitely the Bloods’ best Under 18s player at the moment, and has had to improvise in order to help his team out. He has been sighted a touch more running back to defence and on the outer in recent weeks, though arguably his best value can be seen on-ball. His ability to help calm the back half shows real leadership, though it is a struggle for him at times to extract on the inside amid heavy attention, and with a relatively small midfield brigade in tow.

Our scouts said: “The North Beach junior was outstanding through midfield for Subiaco. Playing as the centreman, Johnson racked up 24 disposals, recorded a game-high seven inside 50s, took six marks, laid four tackles, and kicked a goal in a powerful performance.” – Lenny Fogliani

Verdict: Johnson is a real prospect at 192cm, having grown even more after an Under 16s season which saw him represent his state. His size and aggression around the ball make for the right stuff as an inside type, and he certainly looked the part for Subiaco on the weekend. Johnson’s ability to pump the ball forward, move forward himself, and find the ball are all promising traits. One to watch for next year.

Our scouts said: “Arguably the best player on the ground, Western showed why he is one of the players to watch out for in this year’s WAFL Colts competition. He finished with a game-high 29 disposals, four marks, four tackles, three inside 50s, and a goal. His desire to take the game on with his speed and skill execution went a long way towards Claremont winning the game.” – Lenny Fogliani

Verdict: Western picked up right from where he left off in last year’s premiership-winning Colts side, this time taking the reigns as Claremont’s primary ball winner. Proving us wrong, the Fremantle NGA prospect looked terrific through midfield and looks as if he could find a home there despite his 172cm frame. Freakish skills, clean hands, and evasive awareness make him a difficult player to stop, and he was a key player for the Tigers this time out. Creeping up to the top 25 range.