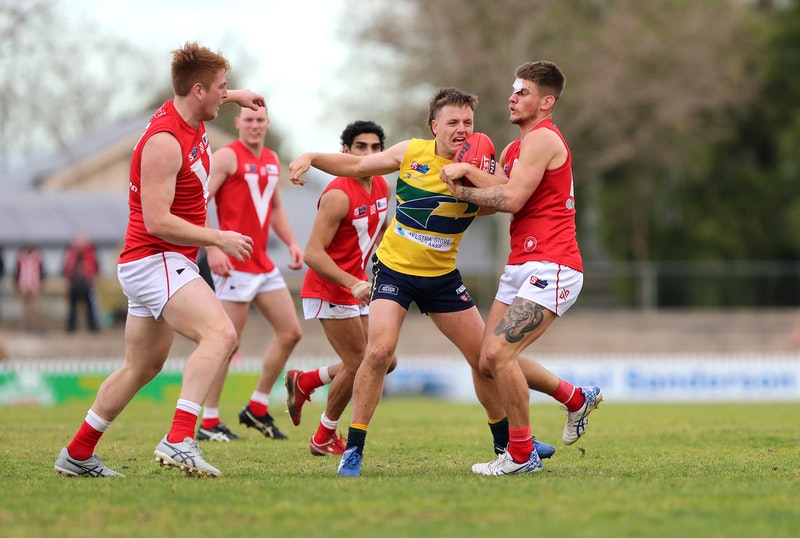 A NEW front-runner has emerged in the South Australian National Football League (SANFL), with Woodville-West Torrens (WWT) jumping West Adelaide on Saturday to claim top spot in the League standings. The Eagles and Roosters are joined by South Adelaide as the three teams tied for first at 3-1, with the Panthers claiming their second win on the trot. A three-way arm-wrestle between undefeated sides remains at the Reserves grade, while the Glenelg and Sturt Under 18s are also poised nicely at 4-0 apiece.

WWT Eagles enjoyed a fruitful weekend across all grades, completing a three-peat over North Adelaide and crucially, claiming top spot on the League ladder. The Eagles also picked up their first win at Under 18s level to sit just outside the finals placings, while the Reserves are moving along nicely at 4-0 in second place.

The 15-point margin come the end of their League clash may have been the only break WWT led at for the entire contest, but it would have mattered little to supporters as their side finished strongly to secure victory. Small forward James Rowe dealt most of the scoreboard damage with four goals, including two in the all-important final term to prove the difference between the two sides. Lewis Hender snagged three goals for North Adelaide up the other end.

The Eagles and Roosters are now level at 1-3 in the Under 18s competition, thanks to an even team performance from the latter to edge home on Saturday afternoon. Potential 2021 Port Adelaide father-son Jase Burgoyne was sensational in an altered role, collecting 31 disposals and booting a goal for the victors. Harrison Dawkins (25 disposals, two goals) continued his consistent start to the season, while Caleb Poulter looked dangerous for his 18 touches, and skipper Zac Phillips fared well in the ruck with 31 hitouts. The returning Henry Smith could only manage three behinds.

For North, Kallis Freer (29 disposals) and Jamison Murphy (28) continue to win a heap of ball, combining for 11 clearances and 10 inside 50s. 16-year-old William Dowling impressed with four majors from 17 touches, while Adelaide Next Generation Academy prospect Tariek Newchurch was kept goalless in his 15-disposal outing.

Tom Keough booted half of Westies’ 10 goals as the Bloods downed reigning League premier, Glenelg on home turf. A four-goal to nil third term set up the hosts’ opening win for the season, as the Tigers managed little in the way of a response thereafter.

The Bloods are now just a point off Glenelg and the finals placings in the top flight, with the Tigers starting to falter in their flag defence. Bays fans would have been buoyed by results across the other grades though, as their side romped to an 109-point triumph in the Under 18s, and a four-goal salute at Reserves level.

Keough was remarkably his side’s sole multiple goalkicker, while five other individuals also found the big sticks once each. Gun midfielder Kaine Stevens notched another 24 touches in a well-rounded performance, with the likes of Brett Turner and Patrick Fairlie also playing solid roles in the Bloods’ win.

While Luke Edwards got his chance at Reserves level, the Tigers showcased their depth with a big win over West Adelaide’s Under 18s. Hugh Stagg had a day out with 28 disposals and 3.5 to lead a pack of six Glenelg multiple goalkickers, while Hagan Wright collected 29 touches to lead the ball winning stakes. Riley Holder (26 disposals, two goals), Luke Pedlar (24 and two), and Lewis Rayson (24 and two) were among the many others to impress.

Despite being beaten soundly in each part of the ground, the likes of Eduard van den Berg (24 disposals, eight marks), State Under 18s jet Bailey Chamberlain (22 disposals, four tackles), and Thomas Rundle (16 disposals, five marks, one goal) stood up.

Norwood snatched an early lead and never looked back in its maiden League win for the season, downing Central District by an even three goals at Coopers Stadium. Both remain the bottom two sides in the top flight, but the Redlegs now have separation from the winless Bulldogs and are just a game off fourth place.

Changes may be in the works for Round 5 after Centrals cruised to an 88-point Reserves victory to sit pretty atop the ladder at 4-0, but the glory ends there for the ‘Dogs with their Under 18 side languishing at 1-3 in the Under 18s after a second-consecutive heavy loss.

There were still some good signs for the away side at League level, with Justin Hoskin booting a game-high six majors and the enigmatic John Butcher adding three more in an improved scoring effort. The Redlegs still found the edge in that department though, as Tommy Pinyon and Peter Bampton made the most of their combined 16 touches to claim four goals apiece.

Former Adelaide midfielder Richard Douglas showed his class in an absolute blinder, cracking in for 35 disposals, seven marks, seven clearances, and two goals as the best player afield. Mitch Grigg played himself into some better form with 24 touches and a goal, while James Boyd led the way for Centrals with 30 disposals to continue his bright start to the campaign. Troy Menzel had a quiet outing, kept to just 13 disposals and a goal.

A similar story was observed in the Under 18s as Norwood kicked away in an eight goal to three second half, with five Redlegs getting on the board with two majors. Among them, Under 16 All Australian Cooper Murley was again lively with 31 disposals in another display of his class. Mitchell Trepka had a team-high 34 touches, while bottom-age defender Alastair Lord managed 31 and Michael Cavallaro bagged a goal from his 27.

Lewis Cowham again led the way for Central District with 35 disposals, seven tackles, and eight clearances as the prime midfield mover, with Shay Linke‘s 22 disposals the next-best tally. Usual suspect Austin McDonald had it 19 times, while Cooper Kalleske and Wyatt Ryan each found the big sticks among their 18-disposal efforts.

South Adelaide broke open its tight League tussle with Sturt with a five-goal third term, setting up the Panthers’ 23-point win over Sturt at Flinders University Stadium. Both sides may have been level on wins coming into the round, but South now breaks into the leading pack with another solid win.

The Panthers’ leaders were made to work to get their side on top, with former Port midfielder Matthew Broadbent (32 disposals, one goal) at the forefront. Joel Cross picked up from where he left off with 21 touches and a goal, while gun recruit Thomas Highmore was terrific for his 27 disposals, 12 marks, and five tackles in defence.

James Battersby (29 disposals, 11 clearances, one goal) and Sam Colquhoun (29 disposals, seven clearances) made for ample resistance in Sturt’s midfield, but the Double Blues could not ultimately get the job done. Zane Kirkwood was another to impress with 23 touches, while Ash Johnson joined Souths’ Sam Overall as the only players to bag multiple goals.

If the midfield battle was strong at League level, the Under 18s tussle was just as enjoyable. Prolific ball winner Tom Powell again cracked the 30-disposal mark as the Doubles Blues beat South Adelaide via a late Morgan Ferres goal – his fifth for the game. Partner-in-crime Mani Liddy was also outstanding, notching 25 touches and 10 clearances.

It came against good opposition too, with bottom-age Panthers Jason Horne (23 disposals, nine tackles) and Matthew Roberts (22 disposals, two goals) among the best, with Nicholas Kraemer getting his hands dirty for 10 tackles. Phoenix Spicer again hit the scoreboard, booting two goals in conjunction with three from Liam Hamilton.

In the two sides’ Reserves dig, Sturt again came out on top to slot into fourth at 2-2, with South Adelaide still searching for a win at the level. The Double Blues kicked all of their goals at one end, managing five to nil in the first term and a further four in the third to set up the 22-point win.