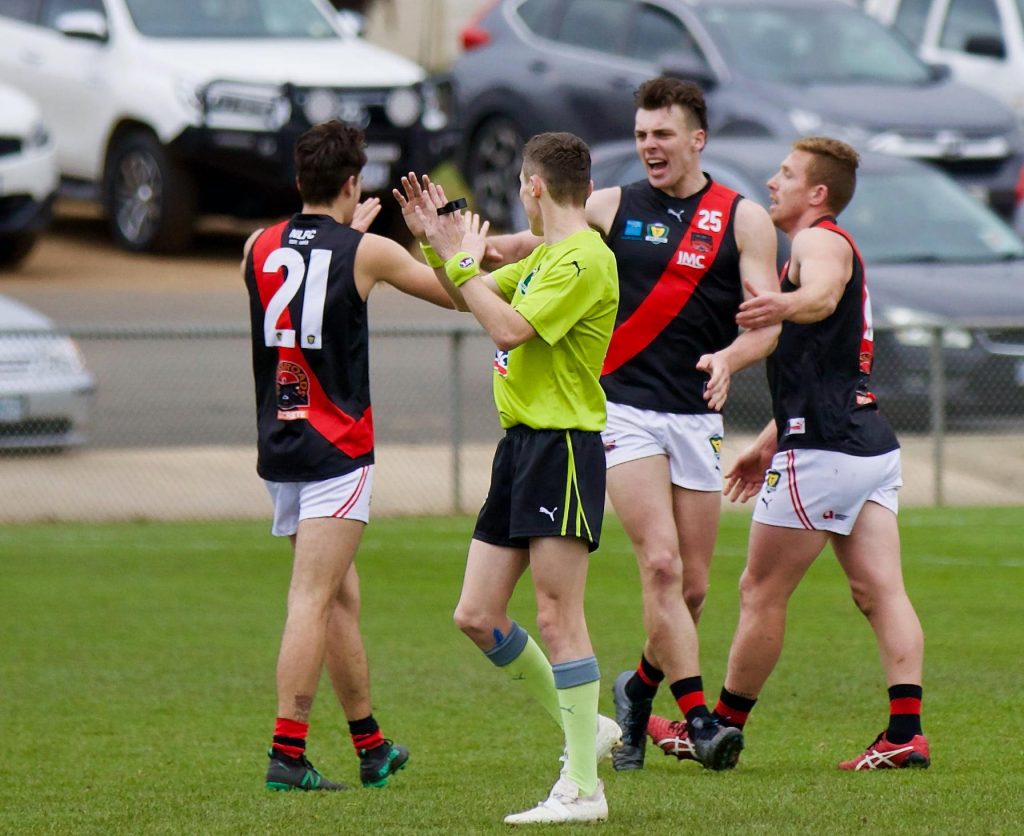 IT was a huge weekend of Tasmanian State League (TSL) action with Launceston breaking a seven-year losing streak against its rivals, North Launceston thanks to a strong second half burst that saw the Blues triumphant by 19 points.

The first two goals of the third term and last two goals of the final quarter were enough for the Blues to get up, led by overage talent Jared Dakin. He was named best on ground for his job on Bombers playing coach, Taylor Whitford, while top-age key position forward Jackson Callow slotted three goals in a losing side that almost got his team across the line.

We take a look at how the two players performed in our Player Head to Head, and whilst they did not line up on each other, were still quite impressive. We also followed the players and counted stats, though note there may be some discrepancies with the official stats which are not publicly released.

Launceston coach Mitch Thorp was a late withdrawal from the match against the reigning premiers, but he had some big plans for overage midfielder, Dakin. Naturally an inside ball winner, Dakin followed Whitford around the ground, and had his number for most of the contest which is what earned him best on ground honours. He blanketed one of the stars of the competition, and was effective with his ball use, racking up 12 touches at 75 per cent efficiency.

Whilst primarily Dakin’s job was to ensure Whitford did not get off the chain, he was able to notch up three clearances himself and find space to move the ball well on the outside. At one stage in the third term, Whitford dragged the youngster back to full-back to try and isolate the pair inside 50. When a ball came in, Dakin read it perfectly and used his athleticism to lead Whitford to the ball, sliding in to take a mark.

A couple of his best plays came in the middle, with a clearance at the 16-minute mark of the first term resulting in him reading the tap, grabbing the ball and putting on the jets from the back of the stoppage to hit it at full pace. He then drilled a low pass inside 50 to a teammate who earned a free kick for an infringement in the marking contest. His other eye-catching play came 15 minutes into the second term, where Dakin gathered the ball cleanly at ground level, burst away with a few quick steps outside 50 and delivered well inside 50, but was unfortunately spoiled.

Overall, Dakin showed off his quick burst out of the stoppage and what he does well when running in straight lines is he lowers his eyes inside 50 and pinpoint passes to teammates on the lead. Unfortunately the Tasmanian missed a lot of football last year due to injury, but he is a natural ball winner who showed in this game he is more than capable of playing a defensive role, whilst matching up on a tough opponent.

Callow is somewhat like an old fashioned key forward who has a better tank and showed in the contest he can even pinch hit in the midfield. He might be a touch shorter than the modern day key forward, but the 194cm forward is one of the best contested marks and shots for goal in the AFL Draft crop. He might not have the breakaway speed that other athletes who have come through the system have, but he certainly has elite hands above his head, and never looked like missing his chances on goal.

He finished the match with the eight counted touches, four marks – two of which were contested – four tackles and three goals. All three goals came from set shots which is how he predominantly gets his scores, but his pressure, particularly close to goal was really strong. With just eight points in the game midway through the final term, Callow laid a big tackle and then followed up with a bump to knock an opponent off the ball deep inside 50, which forced a spill and locked the ball in. He laid the four tackles which was impressive for the big man who had a really strong final term playing up on the ball and still kicking a goal.

His first goal came through strong hands up in front not long before the quarter time siren, took a clean mark and rilled the set shot from 45m out. It had come after an admirable but narrow miss via a snap. After a quiet second term, Callow provided a contest in the third and won a free kick after initially fumbling off the half volley to be pushed in the back. He also converted that set shot with ease, then capped off with a goal from a similar distance in the final term.

Overall, Callow played his role up forward and showed he can mix it with stints in the middle, but he is most damaging one-on-one in the lead or in a wrestle. His set shot kicking is unbelievable and direct, and his pressure was high. Overall a well deserved best-on for the Bombers’ key forward.